Harvey nominations (Part Two): the rest of the categories

Portions of this article were taken from a Baltimore Comics Con press release.

For more information on Harvey Kurtzman, the Harvey Awards, and the list of last year’s nominees and winners , go to www.harveyawards.org

For more information about the Baltimore Comic-Con, go to www.baltimorecomiccon.com   Banquet ticket information is also available there.  Mark Waid has recently been added to the list as guest speaker.  Scott Kurtz is Master of Ceremonies. 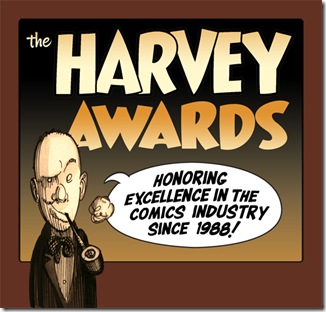 I’m only familiar with Rob Guillory here but I suspect he’d be getting my vote anyway.  CHEW is just one of the most original and creative titles I have had the pleasure to read. It amuses and entertains on many levels.

I’ve read all five of the nominated series here (some more than others), which makes me feel a little better about my credentials.  This is another hard choice.  I think UNWRITTEN is by far the most creative and engaging of the bunch.  It demands you pay attention. If you don’t you’ll miss the fun of trying to figure out everything else going on behind the surface storyline.

I’m at the 50% level here. I haven’t read any of the first three series.  INVINCIBLE is very popular but just hasn’t caught on with me.  SCALPED is a great crime series and can be very complex with psychological undertones.  However, I tip my hat to THE WALKING DEAD   - - many volumes more than SCALPED and in spite of being grouped in with the endless and wearing-thin  zombie genre it continues to surprise.  You worry about these characters, thanks to the skills of Kirkman.

“DIARY OF A WIMPY KID #3: THE LAST STRAW”, Amulet Books

I’m shamed to admit that I (an advocate for quality books for younger readers) only know of one of these titles.  More homework for me.  But the one I know is a real keeper - - THE MUPPET SHOW COMIC BOOK which I suspect would be getting my vote anyway.

More embarrassment for me as I’ve only seen WEDNESDAY COMICS, which gets my nod.  It was simply a great idea to create a tribute to the late lamented big Sunday comics sections with serialized adventures stories.  Very well done and true to scale.  Art and story were very good, considering the naturally choppy nature of this medium.

“WHATEVER HAPPENED TO THE WORLD OF TOMORROW?”, by Brian Fies, Abrams ComicArts

ASTERIOS POLYP should get the win.  It is the best work I have seen from Mazucchelli.  There is a scheme to everything on every page - - the dialogue, the art, the inks and colors, the font size used, the panel layout and shapes  - - it all contributes to the story-telling. An amazing accomplishment.  Am I being fair to the other nominees by singling out this work?  I honestly don’t know.  I like Robert Crumb, but I haven’t seen BOOK OF GENESIS.  I’m clueless about the others.

“A.D.: NEW ORLEANS AFTER THE DELUGE, “ by Josh Neufeld, Pantheon

I regret that I was unaware of the NEW ORLEANS book.  I’m sure that the comics medium is a great medium to depict and express the anguish, sorrow and devastation that rained down on New Orleans.  Sorry I missed that one. MASTERPIECE COMICS  is a great idea, and I greatly admired the package.  The price tag and my budget were the only things that prevented me from picking this up.  But I wholeheartedly recommend COLLECTED ESSEX COUNTY to all.  This is a great example of the skills of Jeff Lemire, his ability to tell so much with so little in both story and art.  He’s exceptionally good maximizing the potential in his style.

If newspaper comics were more like WEDNESDAY COMICS I would read them every day.  I stopped checking the comics section of the newspaper years ago - - mainly from boredom.  I do admit to having a soft spot for MUTTS.  Whenever I’ve bothered to check it out it didn’t disappoint. 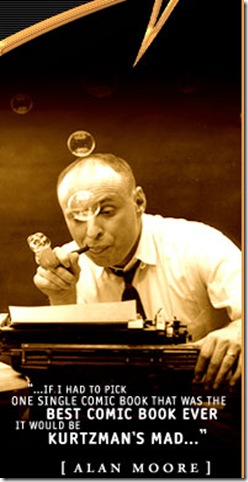 “THE BEST OF SIMON AND KIRBY”, by Joe Simon and Jack Kirby, edited by Steve Saffel, Titan Books

“THE ROCKETEER: THE COMPLETE ADVENTURES”, by Dave Stevens; edited by Scott Dunbier, IDW

I’d probably be voting for Simon and Kirby, Dave Stevens or Alex Raymond if there wasn’t any Kurtzman work among the nominees.  But there is.  Give a Harvey to Harvey.  Just look at the company he is keeping - - a list of early MAD magazine greats.  This is a no-brainer.

“THE ART OF OSAMU TEZUKA: GOD OF MANGA”, by Helen McCarthy, Abrams ComicArts

I better sit this one out.  I just don’t know. I must admit that the title GOD OF MANGA is a bit intimidating.  Makes you want to vote for that out of fear of incurring some wrath.

“POWER OUT”, by Nathan Schreiber, http://act-i-vate.com

I prefer my comics in-hand versus on-line.  But I’m making notes here and will most likely check out all of these at some point.  HIGH MOON gets a lot of favorable comments in the fan press and PVP is consistently popular as well.

SPECIAL AWARD FOR HUMOR IN COMICS

I recently read a SCOTT PILGRIM book for the first time and was somewhat impressed, but it didn’t do for me all the things that THE MUPPET SHOW COMIC BOOK does.  Such a delightful read for any age group.

SPECIAL AWARD FOR EXCELLENCE IN PRESENTATION

“THE BRINKLEY GIRLS: THE BEST OF NELL BRINKLEY’S CARTOONS FROM 1913 –1940”, edited by Trina Robbins, Fantagraphic Books

“THE ROCKETEER: THE COMPLETE ADVENTURES” by Dave Stevens, edited by Scott Dunbier, IDW

Good choices all, but another no-brainer for me.  I’m MAD for the KURTZMAN book!”

“THE BEST OF SIMON AND KIRBY”, by Joe Simon and Jack Kirby; edited by Steve Saffel, Titan Books

C’mon now.  They’re called the HARVEY awards.  Give it to the KURTZMAN book.

“ALEC: THE YEARS HAVE PANTS”, by Eddie Campbell, Top Shelf

“WHATEVER HAPPENED TO THE WORLD OF TOMORROW?”, by Brian Fies, Abrams ComicArts

I’m sure there’s some great reading here which I’ll need to pursue.  The only work I read is ASTERIOS POLYP and I feel it will win.  It’s that good!

That completes the list of nominees.  Whew, are my hands tired!  Best of luck to all the nominees. May the best of the best be the winners.