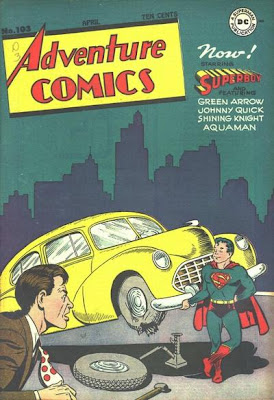 Last month I posted admiring the Michael Cho cover to the 1940's Adventures of Superboy collection, and now that I've had a chance to read the actual book I found it to be kind of a revelation. I knew that Jerry Siegel had created the character, a matter of some legal dispute, but I didn't know that Joe Shuster had penciled so many of his early adventures. The first 100+ pages of this collection are all drawn by Shuster, and what a joy it is to see this vibrant work of his that I never knew existed. Unfortunately Siegel was in the military when these stories were written, so his contribution here is only the 8-page origin of Superboy that opens the book. (Which is pretty much word-for-word identical to Superman's origin story, by the way -- I wonder what that means to his legal claim?)

Everyone's familiar with the Silver Age Superboy, who's a highschool-age teen living in Smallville with Ma & Pa Kent, working on the farm (later the general store), going to Smallville high with his friends Lana Lang and Pete Ross, and playing with his super-dog Krypto. These Golden Age Superboy stories are nothing like that! Instead, he's a much younger kid of around 10 -- they don't pin it down but I'd put him at the same age as the original Robin -- as you can see on the Shuster cover at right. The Kents only appear in a couple of panels in the whole book, and Clark doesn't even wear glasses for the first 50 pages!

The stories are formulaic, but fun, mostly consisting of Clark and his gang of (mostly unnamed) boyhood pals doing 1945-era 10 year-old boy stuff like sailing a raft down the river or exploring the woods alone -- basically anything that today would trigger a call to Child Protective Services -- and stumbling across gangs of crooks that Clark has to change to Superboy (usually faking his own death) and rescue them from. There are also a few stories where he helps with kid stuff, like building soap box derby cars for poor kids, and even a couple that remind me of the social commentary of the early Superman stories. In one, Clark's birthday is the same day as one of the neighborhood girls and they plan to have their parties together, until her father is falsely accused of a crime. Even though he is almost immediately exonerated, the neighborhood gossips warn all the kids to stay away from her until Superboy flies the Metropolis DA to his street to apologize in person. Mostly they're more adventure stories than preachy, though bizarrely there's a traffic safety parable featuring one of Clark's contemporaries. Did kids really drive that young in 1945? Some of the later stories draw Superboy into them with the clever gimmick of a Daily Planet reporter who's been assigned to interview him. (Not Perry White, although he does appear as a 21 year-old in one of the last stories in this volume.)

Most Golden Age stories are pretty dopey and these are no exception, but they're very readable and I found them to be lively and engaging despite the simple plots and I enjoyed the novelty of a Superboy I'd never seen before. The stories are too similar to read all in one sitting, but I had lots of fun reading a few at a time. The book is printed on the same kind of newsprint stock as the Kirby Sandman and Atomic Knights collections, but the colors here are much more vibrant than in those volumes and the art (especially Shuster's) just jumps off the page. I really thought this was going to be one of those Golden Age books that I bought just to have the material but didn't really enjoy, and I couldn't have been more wrong.