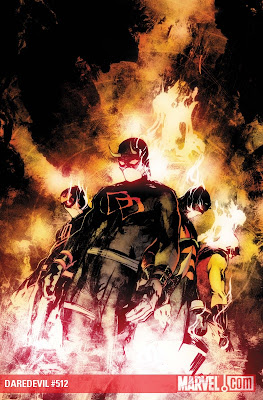 Daredevil 502-507: In these compelling pre-Shadowland issues (just collected in the "Devil's Hand" TPB), Andy Diggle takes Bendis' and Brubaker's Matt Murdock to his logical next step in self-destruction. Unable to stop his old friends from being manipulated by Wilson Fisk, Matt throws himself completely into the task of making the Hand a force for Justice in Hell's Kitchen. He makes some very questionable choices, not the least of which is commissioning Shadowland to be built on the site that Bullseye blew up, but at this point he's still recognizably Matt. His Japan trip in #505-507 shows that Matt is being manipulated by the Hand's elders (which he knows) and betrayed from within his inner circle (which he doesn't.)

Shadowland 1: This is my only real issue with Shadowland so far: At the end of DD #507, Matt has gone down a dark path, but he's still recognizably himself. Here, in the next issue following that, he's in a dark version of his costume -- wonderfully drawn by Billy Tan -- and doesn't seem to have any compassion or inner struggle at all. Even the recap page says "Matt Murdock dared evil and lost", which didn't seem like a foregone conclusion to me at the end of #507. However, I do love Bullseye's escape from the helicopter, and I don't even mind what Matt does to him at the end of the issue -- as I said, I think it's the logical result of everything he's been through -- I just think he should have been damned afterwards, not before.

Daredevil 508: I thought we'd get more insight into Matt's heart and mind in his own book, but he's completely obtuse here except for a moment that's open to interpretation -- is it a possession of some sort, or is it possible that this isn't Matt at all? Diggle's clearly made a deliberate choice to isolate Matt from the reader in the same way he's isolated from the supporting cast. It's a bold choice in a book that's, at least in recent memory, been all about Matt's morality and his choices. It works because it forces us to sympathize with Foggy and Dakota (not to mention the surprise guest star on the last page), who are on the outside just like us.

Shadowland 2: There's some really nice character work in the first few pages, where Danny Rand and Luke Cage try to justify Matt's actions at the end of #1 and when they can't even when they can't they try to mitigate it. "You could tell he was...ashamed. He knew he done wrong", Luke says, but that's not really shown in #1 so is it true or is he just rationalizing? It's also nice to see what appears to be a little genuine frustration from Matt: "They made Bullseye an Avenger! They spat on everything we ever fought for! And now I'm the bad guy?" But then when Shadowland's prison level is invaded, he goes completely off the rails and attacks his old allies.

Daredevil 509: The Izo/Elekra scenes are terrific. Izo's theory is that Matt was acting of his own accord until he became a killer, and then he was lost to the Hand. But as I said before, to me it seems that he was lost before that action. When they get back to New York we'll find out whether that's an inconsistency or a deliberate plot point, I guess. Meanwhile, parallel to the events of Shadowland #2, Matt gets a new ally (from "Avengers: The Initiative", though you don't need to know that) and we further feel Dakota and Foggy's alienation as they're forced into hiding after being attacked while trying to see Matt. (Foggy: "You can't believe it was Matt." Dakota: "He built a castle in the middle of Hell's Kitchen, Foggy. Personally, I don't know what to believe anymore.")

Shadowland: Blood on the Streets 1: For some unknown reason, I've been a fan of The Shroud since his "Super-Villain Team-Up" days so it's fun for me to see him headline a book for the first time in years (decades  maybe?) He crosses paths with Misty Knight because of a mutual case, and she's our gateway into how the NYPD is dealing with what's going on in Hell's Kitchen. There's also a subplot with Silver Sable, but I liked that writer Anthony Johnston remembered that she's foreign (but not Russian). Art is by Rellington Alves, who I've never heard of, but he's good especially on the splash page and the full-page reveal on the last page. It's a little early to tell how interesting this is going to be when all the threads come together, but so far so good.

Shadowland: Bullseye: Sort of a one-shot "Frontline" or "Embedded" where Ben Urich is (literally) forced to cover -- spoiler alert -- Bullseye's funeral. I can't talk about it too much without giving away all the twists and turns, but John Layman ("Chew") and Sean Chen did a great job and I recommend this.

Shadowland: Daughters of the Shadow 1: Part of the fun of these spinoffs is to see some great street level characters shine who couldn't normally sustain their own book. Case in point: Misty Knight's former partner Colleen Wing. What I like about this is that she's the first character we've seen so far who might actually join Matt instead of fight him. The lesson of the success of Norman Osborn as a character in "Dark Reign" is that he had a point, and while Matt's point is less defensible (and he's arguably less crazy) there's still enough to cling to that it's believable that Colleen would seriously consider helping him. I'm not a huge fan of the cover, but the interior art is good.

Shadowland: Moon Knight 1: Basically a continuation of "Vengeance of the Moon Knight" by the same writer, exploring his remaining identities and his connection with Khonshu. Hurwitz brings you up to speed fast, however, and the flashback scenes of MK's childhood will be enjoyable to both current fans and fans of the original Moench/Sienkiewicz series. So far, however, it's unclear how this story matches up with his undercover appearance in Shadowland #1.


Shadowland: Power Man 1: I thought the new Power Man was one of Danny Rand's students from the backup stories in "Immortal Weapons" (which I haven't finished yet), but he denies that in the story here. Still, he is somehow connected to Iron Fist, and I think the dynamic that Fred Van Lente sets up with the new kid's family rings very true to life. There's minimal contact between Luke, Danny and the new Power Man in this issue but the ending is killer and I look forward to more.