By Shane - October 30, 2009
I've been reading quite a bit of DC lately!  I have a fair amount of backlog (I'm up to...past halfway through Countdown to Final Crisis, around that time period), and that includes many of the assorted projects DC was developing around that time.  I've completed most of the unremarkable projects, so now I get to talk about the ones that stood out.  More specifically, I'll be focusing on the ones that weren't part of DC's main line, and instead were on the fringes of the DCU (if they were in it at all). 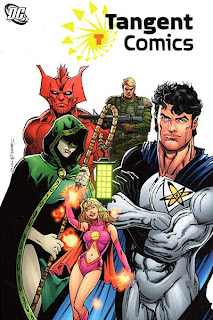 This was a concept that I'd seen only through house ads in DC books around that time.  I was getting my comics through subscription services, so picking up these books was never an option--they were a curiosity, nothing more, nothing relevant.  Going back, though, I can see why these titles took off.  These were titles written and illustrated by some of DC's top talent in those days--Dan Jurgens, Chuck Dixon, John Ostrander, James Robinson, Peter David, Ron Marz, Todd Dezago, Kurt Busiek, Gary Frank, Mike McKone, Tom Grummett, and many more.  It also featured work by future superstars--Mark Millar, J.H. Williams III, Ryan Sook.  All of those names, that's a serious roster of talent--and it showed.

The world of Tangent was complex.  In many ways, it reminded me of Watchmen--it explored what a world might really be like if superheroes existed, because it surely wouldn't just be the same as it is for us, except with people flying overhead.  The comic even included a few nods towards Watchmen, acknowledging that there were parallels--but going in different directions to explore this new world they'd created.  The familiar names and places were a fun bonus, but not important--these are all characters and concepts that can stand on their own, that could (at least as far as story potential goes) support their own titles for a long time.  I'm actually very disappointed that we won't be seeing more in the near future, if at all.

Highlights, for me, included Ostrander's Nightwing stories (something that I didn't expect to enjoy nearly as much as I did) and Robinson's Green Lantern (an eerie tale that explored the history of the Tangent universe), rounded out by Kesel's Joker and Dezago's Flash (both light-hearted stories that were incredible fun).  But really, there were no weak links in these three volumes--every story was strong, powerful.

Mark Millar's Superman story was also a favorite, included in the last batch of Tangent specials, setting up the huge event that occurred there.  As far as single issues go, this is one to remember--it's a complete story with many ambitious parallels to Watchmen, but while many titles try and fail to reach that level, this Superman story succeeds. 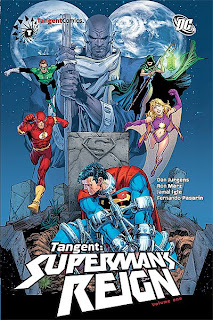 I can't give quite as much praise to the follow-up series of recent years--Tangent: Superman's Reign.  The book tries to recapture the magic of the original titles, and in some ways it succeeds--the characters are all there, (mostly) all strong, and the world is an intriguing one, but it's a very different creature.  The Tangent Superman has gone through the event that began in his one-shot ten years ago, emerging stronger than ever and realizing his true potential--but his mission of saving the world is very, very different from the Superman we've grown to love.  It sets up a strong story with incredible potential to bring these characters back into the spotlight...but I don't know if it quite succeeds.

While most of the main characters return with their personalities intact, a few--Joker, Green Lantern--seem neutered, either by intent (Joker) or simply because Jurgens couldn't quite capture the right voice (Green Lantern).  While this doesn't have too much impact on the story (it works well enough), the magic that made the original stories work isn't quite there--and the absence of many earlier concepts (Nightwing, Sea Devils) hurts this run as well.

Ultimately, I think that Tangent: Superman's Reign was a good story--it was serviceable, with strong (if inconsistent) art, and it seemed easily accessible to even a fan that didn't read the original one-shots.  Unfortunately, this may have lacked the appeal to get new fans to it in the first place, as sales figures indicated.  For fans of the original series, though--new or old--this is a solid ending.  It's just not one that I can endorse the way I would those original three trades.

The War That Time Forgot Volumes 1-2 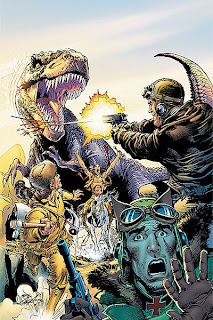 The War That Time Forgot is one of my favorite DC concepts.  It's so completely over-the-top that it's amazing.  An island of dinosaurs, and soldiers get trapped on it and have to fight for their lives?  I could read so much of this, even in Showcase form (and I do, in fact, have that Showcase--it's everything I expected).

And then Darwyn Cooke came along and reinvented this island for New Frontier, and that was amazing as well.  Having the island be the ultimate villain was, admittedly, a little odd, but it worked, and those opening scenes featuring the Losers were probably my favorite pages in that entire wonderful book.

So when I saw that they would be reviving this comic, I was ecstatic.  I have no childhood attachment to this title, but oh dear god I love it so.  And the preview images they posted were strong!  This would be excellent.

I haven't had much experience with Bruce Jones.  He wrote the abysmal Nightwing: Brothers in Blood arc for One Year Later, but also the oddly okay arcs for OMAC and Checkmate--neither of them fit in well with where those franchises were, but taken on their own, the stories were perfectly serviceable.  So I wasn't sure what to expect here, but after watching the sales figures plummet for the monthly issues, I was not quite as optimistic.

It started out okay!  There were a lot of good ideas in here, really.  Pulling characters from different points in history, different wars, to really make this a war that time forgot?  It was a good idea, and so was including other elements of time-travel.  There was a lot of potential here, and I do have to give Jones credit for that.  And the art works--Al Barrionuevo is a competent artist, not a superstar but he's remarkably stable.  And the fill-in artists retained that quality, giving us, among other things, a lovely chapter by Scott Kolins.  And the covers?  Gorgeous shots by many of DC's famous war-comic artists. 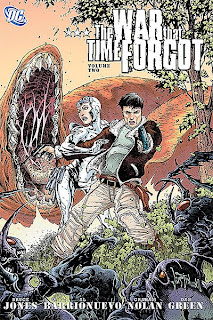 But the story...just didn't work.  Like I said, there was a lot there, and including pre-existing DC characters was a nice touch to get us emotionally involved from the get-go.  But it fell apart after that.  There was too much that Jones was trying to do, and it quickly got to the point where the dinosaurs were barely relevant to the story at all.  They're a fundamental part of the concept--you can't shove them to the background and replace them with poorly-defined antagonists.

The second volume is a bit stronger than the first, with less shaky storytelling, but by this point it's like a separate comic--it's all about the people and the antagonists introduced in the first volume.  The dinosaurs barely appear.  I guess it works fine when taken on its own, and that's something I noted earlier above with OMAC and Checkmate--but it just wasn't the best way to take this project. 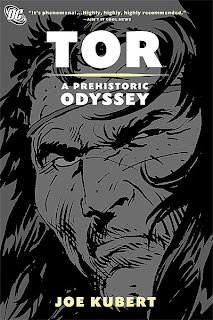 And from there, we get to Tor--probably the best of the three books I'm reviewing here.  The only reason that I can't claim that definitively is because I haven't finished reading it yet--but so far, I'm fairly confident.

Joe Kubert only takes on special projects now, but he continues to prove, with every one, that he's the real superstar of his family--and neither of his sons are slouches, so this is serious praise.  What's more, though, is that he has real writing chops, as well.  I haven't read earlier Tor stories, so I don't know if this is the norm, but here he tells the story entirely with captions matched against the art, similar to how Prince Valiant works.  It's an adjustment to make after reading many comics that involve dialog, but it absolutely works here, and makes sense.  And for many pages, the captions aren't even necessary--his pencils and sense of storytelling are so strong that he conveys the story incredibly through art alone.

For a comic involving elements of prehistory, this is my pick, not the twelve-issue "event" by Bruce Jones that I reviewed above.  I look forward to returning home and finishing this hardcover, but for those wondering if it was worth it, if Kubert still had what it takes to be a master in the industry: yes, it is and he does, very much so.