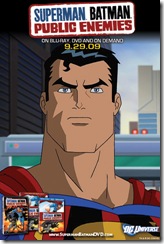 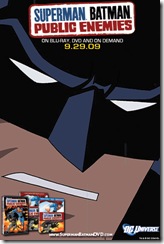 Hot on the heels of "Green Lantern: First Flight" comes the latest direct-to-DVD DC animated feature, based on the opening 6-issue arc of the “Superman/Batman” comic by Jeph Loeb and Ed McGuinness.

The character designs stick pretty close to McGuinness’ art style, which unfortunately doesn’t work as well on the screen. The characters look blocky in comparison to the elegant designs from the “Batman”, “Superman” and “Justice League” series. The comparison is inevitable, because the terrific voice actors from those series have been reunited here. It’s a joy to hear Tim Daly as Superman and Kevin Conroy as Batman again, but the characters as drawn clash with the image in my head of what they’re supposed to look like with those voices. 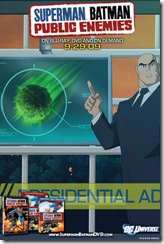 Although this isn’t officially the same continuity, the story completes the character arc for Lex Luthor (voiced again by Clancy Brown) that started in “Superman” and ran through “Justice League” and “JLU”. (I’ve often thought that Luthor was really the main character in those series, especially “Justice League”.) Unlike the comic, where it was already established that Lex Luthor was president, the movie needs to introduce the idea in a plausible way which it does with a really clever opening sequence covering the election campaign during a severe economic downturn. (Sound familiar?) I haven’t read the original comics in a while but as far as I can tell the movie follows the main beats pretty faithfully, except for the Superman & Batman narration the comic was famous for (which wouldn’t have worked on film because it would have crowded out everything else.) I think Superman acts pretty foolishly in his initial meeting with Luthor and Metallo, but that may have been from the original because I recognized some of the dialogue in the following scene. Overall, I like the story and the animation of the action scenes a little better than “Green Lantern” and a little less than “Wonder Woman” but the exceptional voice acting by the three leads bumps it up to a must-have – especially Clancy Brown playing Luthor gradually getting crazier. (Please note, however, that there is some PG-13 language and a couple of suggestive situations that probably aren’t OK for little kids.)

All the extras on the one-disc version come from previous releases, though of course they may be new to you if you skipped some of the other movies. The special features on the second disc include a mini-documentary about the relationship between Superman and Batman (which will probably show up on the next main disc, if the recent pattern holds), an interview with Kevin Conroy, a sneak peek at the next feature (“Crisis on Two Earths” featuring the Crime Syndicate, by Dwayne McDuffie) and a couple of Superman/Batman team-up episodes from the later seasons of “Superman”. (Like "Green Lantern", there is no commentary track.)