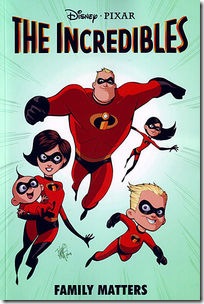 The Incredibles: Family Matters HC: I’m so glad the Pixar license wound up with Boom! Studios, because you couldn’t pick a better writer than Mark Waid for these characters. It’s superficially similar to his Fantastic Four, but since this family has secret identities there’s a whole normal domestic side that the FF as celebrities don’t have. (There’s actually a brilliant story in Waid’s FF about why Reed chose to make their lives public, but I digress.) Waid uses all his skill to make this story seem light and effortless, but it’s actually a perfectly constructed little tale of Mr. Incredible losing his powers and how it affects the family and the team. Artist Marcio Takara is also a great find, balancing the action and family scenes while keeping all the characters on model. My only minor quibble is that the book is a little larger than the paperback digest size, but not quite comic book size. I understand why the paperback is digest size – that’s what kids like – but I don’t get why the hardcover, which is presumably aimed at adult collectors, is not full sized. Extras: 15-page cover gallery, 6 pages of character sketches by the artist. 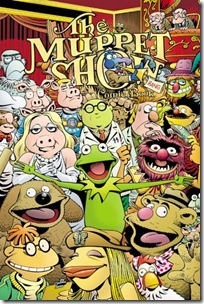 The Muppet Show Comic Book: Meet The Muppets HC: Also part of the Boom!/Disney arrangement, this collection by gifted writer/cartoonist Roger Langridge is a wonderfully faithful adaptation of the “Muppet Show” TV series. The character “voices” are pitch perfect (Statler: “A Muppet Show Comic Book! Oh no, they’re back to corrupt a whole new medium.” Waldorf: “Why’s it called a medium?” Statler: “Cause it’s rarely well done! Hoho!”) and he somehow manages to recreate the variety show format in print. All your favorite segments – Muppet Labs, Pigs in Space, The Swedish Chef, etc. plus a couple of musical numbers – are here along with a story arc for a main character in each issue. (Kermit, Fozzie Bear, Gonzo and Miss Piggy. The ending to Gonzo’s story is actually quite touching.) As Langridge describes in his afterward, Disney has allowed him to be a little off model with the characters to fit his style, and even though it takes a little adjustment at first it’s totally worth it because every page looks amazing. Highly recommended. This collection is undersized too, but the artist says he prefers it that way so I can’t really complain. (And it has one of those fancy bookmark ribbons, which made me happy for some inexplicable reason.) Extras: 15 pages of Langridge’s Muppet Show strips from Disney Adventures magazine. 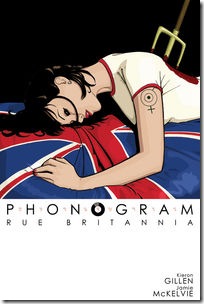 Phonogram: Rue Britannia TPB: Thanks to Shane for the loan of this book. He really loves it, and while I liked it a lot I unfortunately was not touched in the same way. I think that’s because writer Kieron Gillen and artist Jamie McKelvie have carefully created this tale of a Britain where Britpop music is used as magic to mean something to people who have a connection to that music. I’m not a person who generally has an emotional reaction to music; I like it just fine – anything with a good vocal or a clever lyric – but I’m rarely moved by it on a deep level. I know that some people (maybe most people for all I know) are – Wil Wheaton talks about it on his blog sometimes – and if you have that connection you probably will feel this story more personally than I did because music as magic here is a metaphor for those feelings. The modern mythology created here is really rich and wonderful, and I can see why Marvel has hired Gillen to write Thor and Ares. (He’s also doing a Marvel project with McKelvie, but I can’t find which book at the moment.) However, I have to say I think the writing really carries this book. I know Jamie McKelvie can do great work because I’ve seen Suburban Glamour, but a lot of times I found myself caught up in the prose and dialogue and not really looking at the pictures. I’ll definitely check out the second series when the trade comes out later this year, though. Extras: Glossary of bands mentioned in the story. 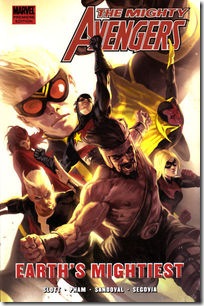 The Mighty Avengers: Earth’s Mightiest Premiere HC: When Brian Bendis left this title to create “Dark Avengers”, Dan Slott and Koi Pham started a new team starring the returned-from-the-Skrulls Hank Pym. It’s definitely aimed at and rewards the long-time Avengers fan, but that knowledge isn’t necessary. To the contrary, actually: this stands really well on its own without needing to know much of anything about what’s going on in the greater Marvel Universe. This volume features the formation of the team by Pym and the Scarlet Witch (who may not be what she seems), as well as Pym’s struggles with Tony Stark and Reed Richards to reclaim their respect and his rightful status. It ends with Pym’s challenge to his team and to the reader to follow his adventures to the next level. I’m totally in love with this book, and I think it will appeal to people who want a more “traditional” Avengers title as well as to those who love what Bendis is doing. Pham’s art is gorgeous, but unfortunately he did not do all the issues in this collection. Extras: Unused cover, Dark Reign teaser ad. 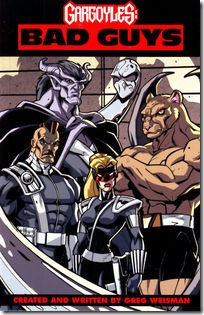 Gargoyles: Bad Guys TPB: It doesn’t get a lot of credit these days, but Disney’s “Gargoyles” animated series was as groundbreaking in its day as “Batman: The Animated Series” which was on at the same time. Writer/Creator Greg Weisman had an elaborate timeline and universe for the series in his head, including this “Bad Guys” spinoff which made it to an early production phase but never to series. When Slave Labor Graphics obtained some Disney licenses a few years ago, they hired Weisman to continue “Gargoyles” as a comic which did well enough to start the long-awaited spinoff as a comic too. The story is fine, although it could have used a little more background on the characters even for a long time fan like me, but the art by Karine Charlebois and Christopher Jones really lets it down. It’s hard to tell what’s going on sometimes, and they’re not skilled enough to compensate for the lack of color. (B&W art is actually more difficult, in my opinion.) Hopefully Marvel will be able to publish “Gargoyles” material when the Disney deal is done, because they have access to much better artistic talent and Weisman is already working for Marvel on the “Spectacular Spider-Man” TV cartoon. Extras: issues #5 and #6. (SLG didn’t renew the license when Disney raised the fee after #4 was released, but they had the right to do “extras” in the trade so they commissioned what would have been the last two issues as “extra” features.)