I have the trade paperback featuring JMS’s first run on the monthly THOR and absolutely love the way he re-introduced this premium Marvel character and settled the new Asgard on Earth. I haven’t read the second trade paperback yet and have been holding it for an opportunity to read them both back to back. (Maybe I’ll wait until I have Volume 3.) So, I’ve been picking up the Thor one-shots, specials and this annual to tide me over until then.

I didn’t like this story quite as much as the last Thor special written by Milligan. I have no major complaints here. I just didn’t find the story that interesting. If what occurs here would be going on in the monthly title I don’t think it would entice me to pick it up. 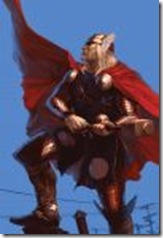 Thor is exiled and in remorse for something he did (I’m assuming this occurs in the regular title) and is hesitant to use his mighty hammer, actually holding back. The pantheon of Egyptian gods, led by Seth, see this as an opportunity to strike and exact revenge. After some soul-searching and discussion with Dr. Donald Blake, Thor overcomes his lack of confidence and uses the full power of Mjolnir to beat back the intrusion of Egyptian gods onto earthly soil. I’m not an expert on Egyptian mythology but I don’t recognize all the names here - - - Seth yes, Gog no, Scarab no (but a good name for an Egyptian character, much better than Gog); Grog, the God-slayer no (but at least he looks the part) and an un-named monster who doesn’t get a name and doesn’t get in on the action.

It’s not a bad story, and the good thing is it begins and ends in this issue. I might have liked it better if Thor actually battled with Seth instead of a trio of gods who resemble monsters more, especially the upstart Gog. Gog looks like a dime-a-dozen brutish monster, acts like a brutish monster, makes mistakes like brutish monsters, and is beaten back easily. Ho hum. If not for the interplay between Thor and Blake this would be tedious. The battle between Thor and Grog is a bit longer but not much better. Why, Milligan, have characters named Gog and Grog in the same story? At least look up some names in Egyptian mythology and use them.

Two different art teams are used on the book, with the more interesting being Mico Suayan. He has an interesting style. Unfortunately, he only drew the introductory front section and the conclusion so we only see what he can do for six pages total.

If you’ve got the time and the dime this won’t disappoint you. However, if you’re following the Thor series this annual is not essential and can be overlooked. BUYER ALERT: The advance blurbs on Marvel.com mention a re-colored reprint of Journey Into Mystery #83 in this $3.99 annual - - it’s not here. I don’t know what happened there.

The complete series was hard to find, but worth tracking down. It’s the continuation of the Pistolfist: Revolutionary Warrior saga that first premiered (just one issue) from the short-lived Alias Comics company. I saw the Bluewater series advertised in Previews and ordered it through BC Collectibles. They brought in Issue #1 and 2 for me, and you can guess what happened after that. I’d been looking for this book for a long time, and finally found Issue #3 at New Dimension Comics in Pittsburgh. Captain Blue Hen in Newark, DE were able to order me a copy of the final #4 issue.

The story occurs during the American Revolution and does a much better job of minding the details and staying true to its background source compared to Thor Annual #1. in fact, it utilizes major characters from American history and incorporates them into the story, none more so than Benjamin Franklin and his adult children. I never knew that he had a rebellious son who allied with the English crown rather than the patriots. I’m assuming that’s true since the book uses a page each issue to answer questions and distinguish between actual fact and fiction. 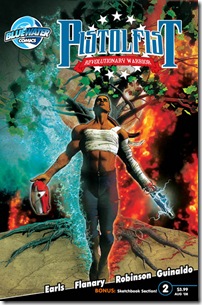 Salem Attucks, the current Pistolfist, is fictional but his deceased brother Crispus Attucks (the original Pistolfist) is based on the actual Crispus Attucks, the son of an African prince and a Natick Indian who was a runway slave slain during the Boston massacre. Much of the action in this series takes place around Fort Ticonderoga in New York (also Philadelphia) and the settings appear accurate. Historic detail from clothing to weapons and buildings, etc. seems to be respected here.

The new Pistolfist tries to rally the troops and make a difference during a battle between redcoats and patriots and is captured and transported to Fort Ticonderoga. The sadistic governor Franklin (Ben’s black sheep son) blackmails a doctor into performing some cruel surgery on the captured slave (Salem Attucks) using a copy of “Design Journal” by Benjamin Franklin. Attuck’s hand is cut off and replaced with a curious looking pistol. What the bad governor had in mind is never explained, and Attucks escapes. He sees his brother in visions and is inspired to treat the new hand as a gift and carry on the cause. 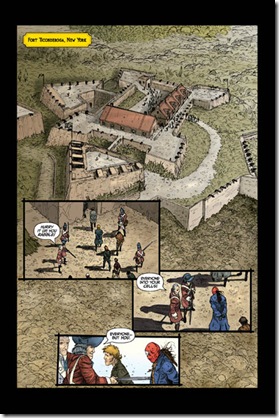 The pistol hand seems to be electrically charged and packs quite a blast whenever used. The technology is never explained, although Attucks is later given some odd-looking batteries to power it. In the same issue the Q & A page points out that batteries existed in that time and even earlier. However, there’s another mystical type weapon being used by the evil governor, a mega-cannon seemingly powered by energy being drained from human captives. As unrealistic and historically inaccurate as that appears, it still doesn’t interfere with the story. Over the course of the four issues, the writers do a nice job of developing Attucks’ character as well as incorporate more historical information and a keen depiction of Benjamin Franklin (very likeable here).

The art by Guinaldo and colors by Jason Embury is first-class, very professional and of the same quality level as found in the mainstream Marvel and DC books. Here’s hoping that this series sold enough copies to convince Bluewater Productions to publish another mini-series featuring Pistolfist. There was a contest winner announced in Issue #4, who created a present-day costume for Pistolfist - - so perhaps that’s an indication that they have further plans.