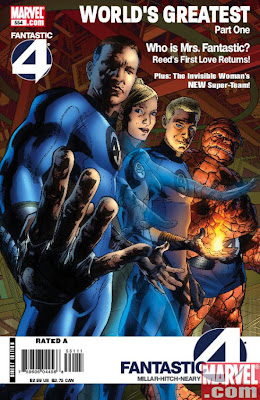 This is one of Marvel's most difficult books to really get right.

Stan Lee and Jack Kirby had a legendary run on this title, setting a record that wasn't broken until just recently (by Bendis and Bagley on Ultimate Spider-Man).  During that run, they revolutionized the comics industry, bringing superheroes back and launching an entire universe that would eventually dominate comics as the leading company.  They also established these characters so firmly, so distinctly, that very few writers have been able to succeed them.

John Byrne.  Mark Waid and Mike Wieringo.  Maybe Walt Simonson.  In the forty years since Lee and Kirby left the book, only these writers have been able to capture the magic of these characters.  Others told interesting stories, but they were stories that could be told--easily--with other characters.  For some, this may be a dream project, but for many it winds up being a nightmare.

When Mark Millar and Bryan Hitch announced that they would come onto this title, many fans were skeptical.  Millar had a history of "realistic" comics set firmly in a realistic world, and Hitch was best known for developing the widescreen blockbuster style that is so popular now.  They weren't a traditional team to take over this comic, despite being at the top of the industry, and they had just come from an incredibly late run on Ultimates 2.  Many doubted that they'd be able to even get these books out on time, much less do justice to the characters.

In one respect, they were right--despite a solid lead-time, this title ran late.  Not horrifically late, but it would, on occasion, miss a month, and seemed to follow the same extended publishing schedule that Justice Society of America followed--one issue every month-and-a-half.  I've heard that there were personal issues to justify the lateness, and I completely understand and sympathize--I don't hold it against them--but it can't be denied that lateness, for whatever the reason, has an effect on readers that follow the title from month-to-month.

I was buying it while BC was still open, and while I thought the title was fairly well done--good stories, good art--it didn't capture me.  I thought that it was an overly-hyped run that didn't need to be extended from twelve issues to eighteen before the first issue even came out, and I had no problem dropping it shortly after the second arc.

Recently, though, I went back to read the entire run, plus the Fantastic Force spinoff miniseries, and I came to a much different conclusion.  Yes, the delays hurt the book--but when taken as a whole, I thought that the book worked very well.  The tie-ins to Millar's other work--Old Man Logan (which I think was over-hyped and not necessarily worth the praise) and Marvel 1985 (which I thought was an excellent exploration and character and psyche) were intriguing, but never essential to the enjoyment of this story, and were often not even worth it.  Someone who didn't read 1985 might find the ending of the Doom's Master story arc underwhelming, too much exposition without any real meaning--other scenes, however, read completely fine on their own, while gaining a real emotional weight if you have read the other stories.  Despite all of this, though?  I think that Millar and Hitch managed to successfully identify what makes the Fantastic Four work.

The Fantastic Four are a family.  This is something that everyone knows, and something that every writer tries to make work, but they're rarely able to do so without turning the characters into one-note stereotypes of themselves.  There has to be that perfect balance between the grand-scale cosmic epic that no other character could do, and the down-to-earth family that loves each other more than anything.  And these two concepts can't just alternate story arcs--they need to be present in every scene, every page, in some form, because that's what makes the Fantastic Four unique and worth reading about.

Millar and Hitch managed to do it.  They crafted four epic storylines, each feeding into the other in some form.  They managed to show, in every line, every action, how the characters felt about each other--the hesitation in Reed's words when he would speak to Alyssa Moy, while at the same time being captivated by the world of science that she lives in--the complete love and trust that Susan has with Reed, while still being frustrated by his devotion to sciences that she can't understand--the rivalry and deep friendship between Johnny Storm and Ben Grimm--the love Franklin has for his sister, feeling the instinctual need to protect her, even if she is far more capable than he is.  All of this, all of these familial relationships, with the entire space-time continuum as a backdrop.  Millar understands these characters, and Hitch translates that perfectly with the emotion and body language in his art.

Bill mentioned, once, that he was not fond of the New Defenders from the future--that with Skaar running around in the Marvel Universe now, why would Millar use a completely different son of Hulk?  I'm curious to know if his opinion would change after reading Old Man Logan--I had no strong opinion about Banner Jr. or the Hooded Man on my first read, but now I had a real tie to the characters and was eager to follow their adventures in Fantastic Force.  This miniseries was an interesting one to watch develop, not necessarily from the story side, but just by watching the solicitations and sales figures.  It was originally solicited as an ongoing series, but reduced to a five-issue miniseries by the time the first issue was published, and then to a four-issue miniseries when the second issue was released.  You can see that in the writing--the miniseries starts off strong, setting up so many potentially great plotlines, but they're unable to be truly developed because of how fast the story must end.  This is an unfortunate reality of the industry--no matter how captivating a character can be, their story may never be completed if sales don't warrant more issues.  The first two issues here were very well done, but the last two were rushed, throwing in characters and concepts that didn't even have time to stick.  This may have been a great arc if done over, say, a year's worth of stories, but in just four issues, there was just too much content.

Ultimately, I have to say something similar about the final issues of the Millar/Hitch run.  There was a lot that could be done with Doom's Master, and the first issues of that arc were very well done, intriguing, well-thought out.  I thought that it would be a very interesting Doctor Doom story from a different perspective--but as it got towards the end, it began setting up an impossible challenge, and then tried to end it in a single issue--an issue that Millar didn't write and Hitch didn't draw.  Again, personal issues put the schedule back quite a bit, and then they had other commitments, such as Hitch drawing Captain America: Reborn, but it made for an awkward last issue that attempted to tie everything up.  Millar plotted for Fantastic Force writer Joe Ahearne, and the very capable Stuart Immonen handled the art chores, but it lacked the consistency of vision that the rest of the run had, and the mood just felt off.  The issue was double-sized, which helped, but they attempted to split the issue; the first half dealt with the final battle, and the second half dealt with the Thing's wedding, and both suffered as a result.  If they had devoted this entire issue to wrapping up the Doom's Master arc, with one more issue for the Thing's wedding, it would've gone much better--a more quiet issue to wrap up the run, emphasizing the focus on family--but that wasn't to be.

With all of that said, would I rank this run as one of the few Fantastic Four classics?  Up there with Lee/Kirby, Byrne, and Waid/Wieringo?  I don't know  I'd rank it on par with the Simonson issues, at the very least, but I'm somewhat hesitant to place it in the elite.  What are your thoughts?

I also took a look at the new run by writer Jonathan Hickman, first with the Dark Reign: Fantastic Four miniseries and then his first two issues on the ongoing title.  I have mixed feelings--it seems to, in many ways, set the family dynamic aside, focusing on Reed Richards--and part of me thinks that's smart.  It can be so difficult to tell stories about the Fantastic Four s a unit, but focusing on just Reed Richards opens up many different possibilities.  On the other hand, this isn't a Mr. Fantastic series--it's Fantastic Four, and the entire family should be represented.  I was intrigued enough by the ideas developed to take another look, but I'm worried that at the end of the day, it'll just be another forgettable run. 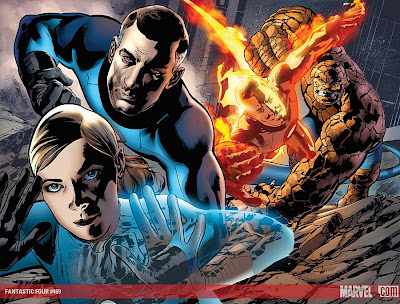