Just three issues in and the story of Harley Quinn’s abduction is interrupted for this unrelated story featuring the Riddler.   Call it whatever you like, but a “fill-in” story at this early juncture can’t be a good sign for this book. 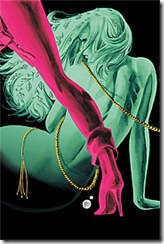 This time it doesn’t appear to be delayed artwork that’s holding things up. The artist here is the same one assigned to this book.  Writer Paul Dini is M.I.A.  But Page 3 does feature Catwoman and Poison Ivy asking for The Riddler’s help, and the final page shows an informing phone call to Selina.  Unfortunately,  both pages are not pertinent to this issue’s story and seem to be inserted later just to remind us that, after all, this book is GOTHAM CITY SIRENS.   The cover to Issue #3  does feature Poison Ivy in a seductive pose (weren’t you expecting that?) and bears no relationship to the story inside except for the four question marks (that were likely added later as well). Finally, the fact that I found this issue to be a better story than what has normally been occurring in these pages could be a sign that my interest in this title is declining.

Guillem March’s art here is as good as always and doesn’t appear to be rushed.  There’s a lot to admire in his style.  Scott Lobdell does a great job with the story.  It’s very good. Maybe DC bought it some time ago and didn’t know where to use it until now.  The story center around the reformed Riddler, who now wants to use his cerebral skills to aid society as a private investigator solving major crimes.  He sees a connection between two seemingly un-related suicides of celebrities and makes a connection to a serial killer who likes to leave clues behinds (like his old modus operandi).  Batman gets involved and between the two they solve the mystery and save the day.  It’s a very engaging and amusing story.

The storyline from Issue #2 continues here as Thomas Elliott/Hush in disguise as Bruce Wayne plots his next move - - kill Harley Quinn, and do it in public view.  That way he can still discredit the Wayne name and legacy, since in the other title (STREETS OF GOTHAM)  the new Batman and Robin seem to have countered his move to bankrupt the Wayne fortune. The Joker tries to disrupt the phony Wayne/Quinn romance and puts on his silly face for the event.  This story was amusing and somewhat entertaining but it didn’t completely satisfy me. There are many interpretations of the Joker out there (by various writers) and they seem to fall into one of two camps - - the dark, manic Joker or the wacky, silly Joker.  We get the silly Joker here.  I prefer the dark over the light.  The character just seems to have so much more potential when portrayed that way, although one of the best one-shot Joker stories I’ve read was scripted by Dini.  This isn’t the one.

Later in the issue Dini uses Harley to explain things when he has her say of the Joker:  “I made him so jealous that he pulled out all the stops to get my attention!  He hasn’t used classic shtick like giant balloons and wacky henchmen in years!  My puddin’ loves me”. Her dialogue occurs as a Joker mobile approaches from behind her and right before the issue ends explosively.   I’m not satisfied.  The art by March kept me turning the pages and saved the day again.

P.S. . . Why always a provocative cover? Doesn’t DC think anyone will buy this book?

NOTE:  If you want to follow the re-introduction of AZRAEL (new monthly debuts in October) it begins right here and continues in DETECTIVE COMICS ANNUAL #11.

“The Eight Deadly Sin. Part One: Casting The First Stone”  by Fabian Nicieza and J. Calafiore

Sooner or later I was going to pick up a BATMAN book.  While I’m waiting for the new writer to begin on the monthly title, I picked up ANNUAL #27 because it looked promising despite the story by Fabian Nicieza, a writer I’ve learned to approach with caution.  (Not saying that he’s a bad writer, but when he’s off his mark or just cranking out stories it gets smelly bad.)  Besides, I like Calafiore’s style here, especially when he gets a full page or two-page spread to work on. 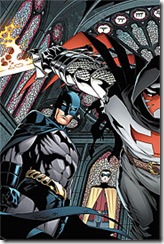 A priest in murdered at his church, apparently guarding a desecrated gravestone. Batman and Robin investigate and encounter an adrenaline fueled disciple in a hybrid animal/demon suit.  The new Batman and Robin are questioning and testing each other’s abilities, and Nicieza handles this very well.  The Order of Purity gets involved and sends out the new Azrael in his standard Suit Of Sorrows  There’s an even older order involved in this, La Saligia, and their emissary (the demon man Amon) is abducting children as part of a mad plan “so that all man’s sins can be absolved . . .”  Batman and Azrael working together find all this out just as the story ends (to be continued in DETECTIVE ANNUAL 2009).

“Off Rogue Racing - - A Lil Gotham Tale!” by Derek Fridolfs and Dustin Nguyen

This is a cute road race between Batman with Robin and against various villains.  The art by Nguyen is in a very different style for him - - much more cartoony (even reminded me of that old black and white magazine - - CARtoons - - anyone remember that?) and it works.  However, keeping it short was smart and I’m glad this ends after 2 pages.

“Darker Than Black, Part One” by Mandy McMurray and Kelley Jones

It’s always a pleasure to see Jones at work, and the style is very fluid here. Appropriately so, since the story concerns Barbara Gordon playing detective to solve a robbery of a blood bank where the thief left a calling card drawn in blood.    The story concerns her investigation and conclusion that the culprit is suffering from porphyria, a disease that causes insanity with vampiric symptoms.  The police use her findings to track down the thief, but Barbara isn’t convinced they have the right person.  Neither will you.  You’ll probably come up with the same suspect that I did.  But this story is also continued in DETECTIVE ANNUAL,  so we’ll have to wait to see who’s right.