COMIC SHOP SURVEY for May 2017: Button and Secret Empire rule

EDITOR’S NOTE:  This month, I heard back from CAPTAIN BLUE HEN COMICS in Newark, Delaware regarding best sellers for May and other topics.  Let's check in with Joe Murray, co-owner/operator of Captain Blue Hen for his comments: 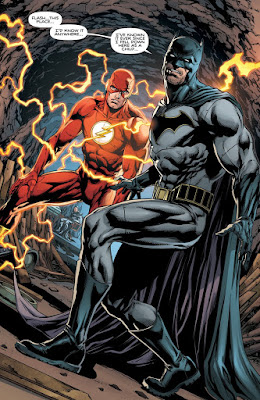 JOE MURRAY:  “Four out of five of the best selling comics for the month of May came from two stories - - THE BUTTON crossover from DC with BATMAN #22 selling a good one-third more than the second place holder, fellow Button arcer, FLASH #22.

SECRET EMPIRE #1 and #2 from Marvel filled the third and fifth slots of the Top Five for May, with perennial powerhouse BATMAN #23 holding the #4 position.

WALKING DEAD #167 was the highest selling non-Big Two title at the #10 slot.

Looking ahead to June, based on pre-orders the two BATMAN and SECRET EMPIRE issues look to be our best sellers, although that’s subject to change as SECRET EMPIRE has been selling well below expectations and leaving unsold copies on the shelf.

Gazing into the crystal eight ball for July, the new DC event DARK DAYS: THE CASTING is our predicted sales favorite, with BATMAN and SECRET EMPIRE unsurprisingly rounding out the Top Five.

For May, a big sales disappointment was brought about by Marvel’s over-saturation and glut of GUARDIANS OF THE GALAXY titles.  The re-launch of the GOTG title with a new #1 issue was muddled and muted by it shipping with two other GUARDIAN #1s the same day.  So, two one-shots, a five-issue weekly mini-series and a re-launch #1 were more than the market ever wanted

The talented team of Alan Davis and Jim Starlin deserved a better showcase for their work than the ignominious death knell in the eyes of retailers regarding a weekly series for their GUARDIANS: MOTHER ENTROPY.

Whenever retailers see a mini-series released weekly it is usually seen as a lack of support and an attempt to beat the system by rushing it out so that orders can’t be adjusted.  Conventional wisdom is to order extremely low, and the glut of GUARDIAN titles made MOTHER ENTROPY a sales failure that couldn’t even sell half of our worst case expectations.”

BC REFUGEES:  “Thanks, Joe!  Great info, and I believe - also of interest to our readers.  Just curious - - did you get any pre-orders for MOTHER ENTROPY, and how many?

JOE:  “I’m not sure exactly how many pre-orders we had for it, but I know it was less than three.  These days subscriber pre-orders have little bearing on initial order numbers as virtually no one signs up for new titles in advance.  The best we can do is guess and roll subs from a  related title into a new title.

Your average GUARDIANS ongoing series sells at least twice what we ordered for MOTHER ENTROPY.  The problem with weekly titles is that we have to order  ALL the issues blind with no opportunity to adjust the quantities up or down based on actual sales data.  With a normal title, if the first issue turns out to be a dog, we can slash orders by issue #2 or #3, but not so with this rushed-out mini-series.”

We ordered very low (for a title featuring these guys, very, very low) and still only sold about 20 percent of them.  When the series is over, we would’ve done better to have not ordered the title at all.  Given the books creative pedigree, it would have done much better released as a traditional monthly mini-series.  I had the opportunity to ask Marvel about this exact situation regarding this title, as was effectively told “yes, we know sales will be much lower because of the release schedule.”

EDITOR’S NOTE:  I’m a little disturbed by Marvel’s response to Joe’s question.  Sounds like they don’t care about the sales numbers.  They know they have a willingly captive audience, and demand for Marvel titles is huge.  Seems like they focus on the pre-order numbers, and putting out a weekly makes sense from their side of the fence. I’ve long suspected that the reason both Marvel and DC put out so many titles every month  (averaging at least  70 books per publisher every freaking month) is to keep the numbers down for the other publishers.  Case in point - - look at Diamond’s monthly sales report, which features the top pre-ordered books, and you’ll see Marvel and DC dominating almost all of the 100 spots.

Well Marvel and DC, it’s not working!  You may dominate the Diamond monthly list, but those other publishers are still making a good living.  They sell enough books to stay in business and continue to grow.  Look at the increased market presence of Boom, Dark Horse, Dynamite, IDW, Image, and Valiant over the last five years.  And watch out for Aftershock, Alterna, and Titan to name just a few of the newer publishers putting out good books.

Marvel and DC have benefit of some extremely talented creative writers and artists working for them, and both produce some excellent books worthy of your comics dollar.  But overall, more than half of their output is average, and just glutting the market.  I wish both of these publishers would concentrate on putting out the best books they can instead of seeing how many titles they can throw against the wall each month in an effort to out-do each other.  End of sermon.