Chapterhouse titles to be available through Diamond Distribution

“Diamond is excited to continue our partnership with Chapterhouse,” said Diamond Vice President of Purchasing, Tim Lenaghan. “With the recent relaunch of Captain Canuck and a strong showing at this year’s Free Comic Book Day, we look forward to working with the entire Chapterhouse team on reaching new audiences around the world.” 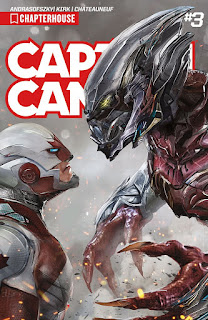 "Diamond has helped us grow from a fledgling company to the largest publisher of comics and graphic novels in Canada,” said Chapterhouse Comics Publisher, Fadi Hakim. “We're honoured to be invited to join their thriving book division and can't wait to get started!"

Founded in Toronto, Ontario in 2015, Chapterhouse Comics has built on a legacy of more than 75 years of Canadian comics. As the home of the iconic Canadian superhero Captain Canuck, Chapterhouse also publishes inspiring and inventive creator-owned titles such as Die Kitty Die, Spirit Leaves, Queen Street¸ and The Fourth Planet. Chapterhouse recently participated in Free Comic Book Day 2017 with the launch of Captain Canuck: Year One, a mini-series that marks the Chapterhouse debut of Jay Baruchel, the writer, actor and director behind Goon: Last of the Enforcers.

Customers and fans looking to pre-order Chapterhouse Comics titles should contact their local retailer, or find a comic shop near them at http://www.comicshoplocator.com/Home/1/1/57/575.