By pghhead - January 14, 2016
EDITOR’S NOTE:  This is a very cool concept.  More details can be found at the links within the story.  There are some scattered Hastings locations in the Philadelphia/New Jersey area, one in Delaware, and one in Towson MD.  If I wasn’t going to be traveling this month and early February I would probably attend some of these.  More details below . . . . . .
from the official press release . . . . . . .
Hastings and Valiant Present "Comics College" – A Weekly Instructional Workshop Beginning January 30th.
Plus: Don't Miss Your Chance to Illustrate Valiant's Free Comic Book Day 2016 Hastings-Exclusive Cover with the Official "Comics College" Submission Contest! 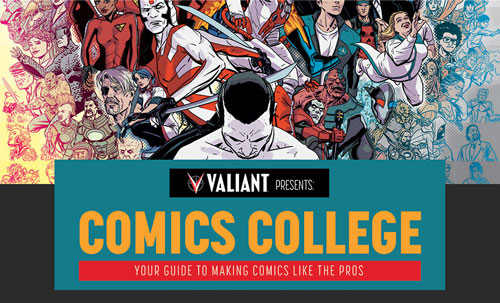 JANUARY 12th, 2016 – This winter, Hastings stores across the nation are joining forces with award-winning comics publisher Valiant Entertainment for “Comics College” – a fun-filled, educational workshop exploring every corner of the comic book industry! Following in the footsteps of last year’s “The Craft of Comics” series, Hastings is taking fans even deeper into the world of comics with brand-new video seminars that detail all the tricks of the trade – as revealed by one of Valiant's leading writers or illustrators each week! The month-long "Comics College" in-store event begins on Saturday, January 30th at 2pm ET at a Hastings location near you and continues with new episodes every Saturday through February 20th.

Broadcasting into more than 140 Hastings locations nationwide, each installment of “Comics College” offers an inside look at the process of creating comics from start to finish. Featuring a new conversation with a different Valiant creator each week, join us here as some of the brightest talents in comics today examine the most important aspects of working in the comics industry today – from getting your first big break and writing your first script to the finer points of portfolio reviews for artists and editors alike…and much more!

Plus: Valiant is giving each Hastings viewer their shot at their chance to win the prize of a lifetime – their first professional published comics debut – with the official "Comics College" contest! Over the course of the “Comics College” event, aspiring artists nationwide are encouraged to illustrate and submit their favorite Valiant comics character in a captivating scene of their own choosing. From there, the winning piece will then be published as the official art for Hastings' exclusive variant cover for the VALIANT: 4001 A.D. FCBD SPECIAL – hitting Hastings stores everywhere for Free Comic Book Day 2016.
Creators scheduled to stream during the workshop include:


Contact your local Hastings location or visit GoHastings.com/ComicsCollege for more details and complete contest guidelines. Beginning on January 30th, prepare yourself for a crash course in making comics like a pro with a priceless treasure trove of behind-the-scenes insights…coming soon to a Hastings location near you!
###
About Hastings
Hastings is a leading multimedia entertainment retailer that combines the sale of new and used books, videos, video games and CDs, as well as trends and consumer electronics merchandise, in a superstore format.

About Valiant Entertainment
Valiant Entertainment is a leading character-based entertainment company that owns the largest independent superhero universe in comics. With more than 81 million issues sold and a library of over 2,000 characters, including X-O Manowar, Bloodshot, Harbinger, Shadowman, Archer & Armstrong, and many more, Valiant is one of the most successful publishers in the history of the comic book medium. Today, the company’s characters continue to be forged in publishing, licensing, film, video games, and beyond. Valiant consistently produces some of the most critically acclaimed comics in the industry and has received numerous industry awards and accolades, including a Diamond Gem Award for Comic Book Publisher of the Year. In 2015, Valiant announced a multi-picture deal to bring Bloodshot and Harbinger to the big screen as feature films. Visit Valiant online at ValiantUniverse.com.