EDITOR’S NOTE:  We continue a new monthly feature where we recommend some upcoming titles from the current PREVIEWS catalog.  These are not going to be Marvel or DC titles, as every self-respecting comic book store will have every single issue available on their shelves.  This has more to do with current comic shop economics.  Since retailers cannot return unsold books, titles from lesser known publishers are not as well-represented.  Sometimes stores can’t afford to take a chance on a new book, so they order few or no copies.  By highlighting some titles worthy of attention, we hope to take a step to correct that mis-representation.  The rest is up to you, the reader.  If you are interested in a book you learned about on our site, then you need to pre-order it through your local comic shop.  That’s the best way to make sure you will get a copy. GHOST WOLF: BORN IN SNOW AND BLOOD TP (STK698045)  is offered through Amigo Comics and can be found on Page 282 of the current January 2016 issue of PREVIEWS.  A review copy of the trade paperback was provided to us courtesy of Amigo Comics.

The message is reinforced throughout the stories, enhancing it with a legendary, mythical feel:  ‘This is the story told one thousand times.”  The trade paperback reprints the GHOST WOLF four issue mini-series from 2014 offered through Amigo Comics in Spain.  It’s a welcome blend of new mythology, horror themes, and barbaric action.

Pick this one up for the amazing art.  Return for the story.  It rewards on both levels.  If you enjoy CONAN THE BARBARIAN and horror tales featuring werewolf-like creatures, this will appeal to you. While each artist employed has a distinct style, they mesh and blend together very well and it’s hard to tell where one artist ends and the other begins unless you are seriously studying the panels. (Which we did on repeated readings.) Each impresses in their own way.  I was reminded of the works of Barry Windsor Smith, P. Craig Russell, Cary Nord and Ernie Colan while reading the trade paperback.

Writer El Torre begins with the re-telling of a legend (purely his own fabrication, we assume) to set the tone for the remainder of the book, and reinforces it throughout the story.  His ability to lend a mythic quality and feel to what transpires here rivals the abilities of Roy Thomas and Walt Simonson to do the same. 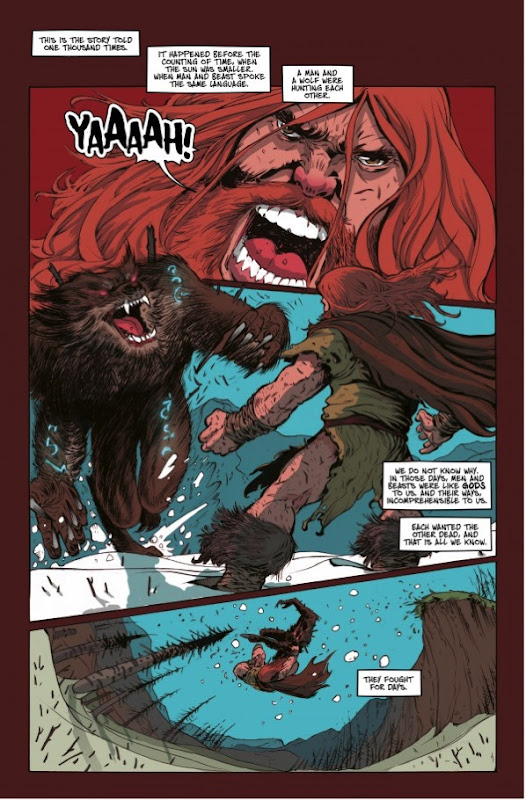 Chapter One, “The Story Told One Thousand Times” reveals that prior to the beginning of recorded time, men were like gods and humans and beasts spoke the same language. Man and wolf fought each other ferociously for days, until the wolf weakened. Instead of killing him, man shared meals with wolf and tended to his wounds.  When the Hungry Ones arrived, zombie-like demons that thirst for the blood of the newborn earth, man and wolf forged a bond and fought together against their common foe.  Wolf eventually died of his new wounds, and man vowed to wear the wolf’s skin and seal the pact.

After one thousand years of passing the tale from generation to generation, man suddenly forgot about the Ghost Wolf legend and the mission: “to fight, to protect, to survive, to avenge.”  This provided an opportunity for the Banath a cannibalistic tribe, to strike at the ancestors of the first men.  The Shaman was forced to call on his grandson, to make a sacrifice that would bring back the Ghost Wolf to protect his people.

The transition from artist Czerniawski to Siku occurs as the ancient story ends and the later tale begins.  The two styles compliment well and help to make the transition.  I suspect there is a change in the colorist at this point as well, as the second part of Chapter One is illustrated in much more vivid colors and more hues. If you like barbarian art as done by John Buscemi, Walt Simonson and  Barry Windsor Smith, you will love the first part of this story.  When Siku takes over,  the art style reminds me in different places of Barry Windsor Smith again, plus Mike Mignola and the early Daredevil period of Frank Miller  (all good company, but neither of these artists are imitators.  This is just what their art reminds us of.)

Chapter One ends with the emergence of a massive brutal leader for the Banath, a god-like man wearing animal furs and an elk’s horns by the name of Kerunnos.

In Chapter Two, “Kerunnos”, the Banath enslave the first tribe and the gigantic stealer of souls grows weary of their futile resistance until he learns of the legend of the Ghost Wolf.  He then challenges their avatar to battle, and of course the legend returns to wreak havoc amongst the Banath, including a huge number of decapitations.

The art transition here from Siku, who details a short section in the front part of the book, to new artist Lorente is smoother than the previous chapter but breathtaking as well.  Lorente excels at scenes of battle of which there are plenty in this chapter.

In the second half of the book, both chapters (“Mara” and “We Are Stories”) deal with events that occur several generations after the coming of the Banath.  It’s a time of relative peace, and people no longer need the services of the Ghost Wolf and most have forgotten the legend.  Only a few continue to pass the memory on through stories taught to their children.    This makes it possible for the remaining Hungry Ones, defeated and banished by the first man-wolf alliance in Chapter One, to be revived again by the deceiving Crow-Witch. 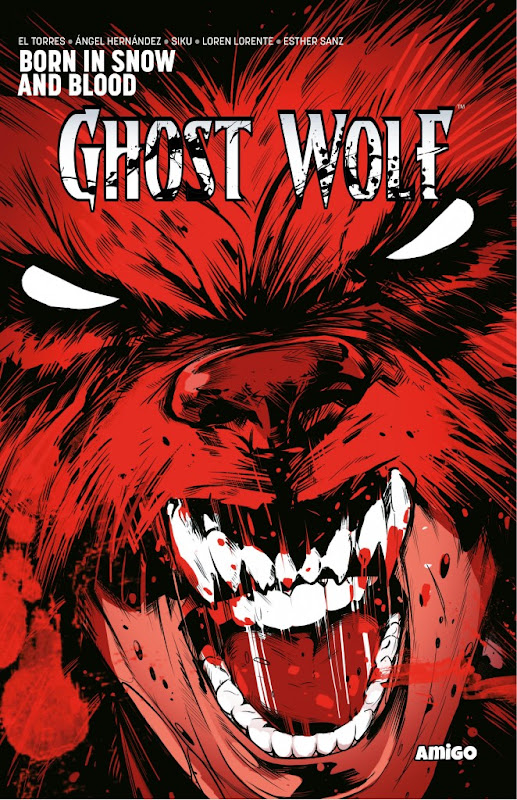 It takes another alliance of mankind and wolf, this time with a combat-skilled warrior woman by name of Mara, to revive the Ghost Wolf to once again fight, protect, survive and avenge.

The final two chapters are illustrated by Angel Hernandez, perhaps saving the best for last (although all the illustrators are dynamic, so there’s no need to chose).   There is even more Mignola influence to be seen in the work of Hernandez.  He also excels at barbaric battle scenes and there are some very effective splash panels and two-page spreads.

We were trying to avoid giving too much of the story away here, but wanted to indicate how much depth there is to this work, far more than is typically seen in stories of this type. We needed to spoil a little bit in order to get the idea across.  GHOST WOLF is definitely worth your investment.   Recommended.