compiled from press release materials furnished by Devils Due Entertainment . . . . .

Two tribes of animals find themselves on the brink of war. Will they survive and find peace, or follow humanity into extinction?

Squarriors is the epic saga of warring animals in a post-human world.  The story follows  a small tribe known as the Tin Kin, and their struggles building a life in the new world while confronting the hostile neighboring Maw tribe.

Since the demise of humanity, the remaining animal life have become intelligent and the spark of rational thought creates an internal struggle for the creatures.  Do they embrace reason... or follow their savage animal instincts?

Issue #1 was successfully funded through a Kickstarter campaign. It is scheduled to be released in December 2014 and is available to pre-order through your local comics store. See the current October issue of PREVIEWS (Diamond Distribution) for all the details.

Squarriors #1 promises an engaging story with absolutely stunning artwork - - a full 32 page, full color story.  The campaign has now opened up to fund Issue #2.  The overall goal is to produce four mini-series of Squarriors stories.  Each min-series will represent a seaon in a single year.  The first 4-issue series begins with “Spring.”

We previously featured Squarriors on BC Refugees back in July when the Kickstarter campaign was beginning . . . . .

Interested readers can still make contributions to future issues and receive various rewards. Go to http://www.squarriors.com/main.html to learn more about the creators and view more art and go to https://squarriors-teeth-and-nails.backerkit.com/hosted_preorders if you want to see what incentives and preorders are available. 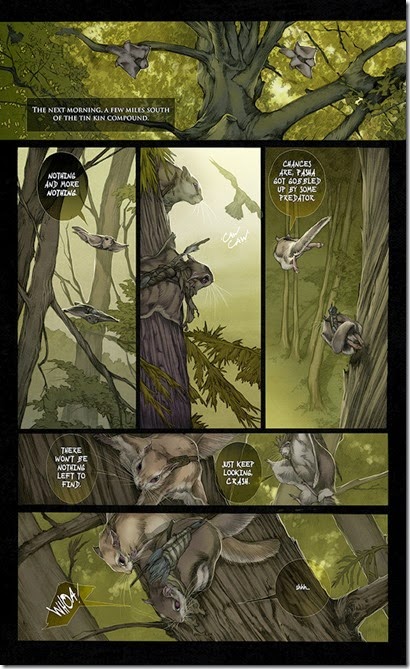