Slumberland: A loving tribute to a comic strip legend

Sometimes the best recognition for a legendary work is for a new creation to pay tribute to it.  All the best homages remain true to the spirit of the original while introducing a new audience to the majesty of the source material.  Little Nemo: Return to Slumberland is the best compliment to the genius of Windsor McCay.  It is a stunning new work of pure brilliance, and worthy of Harvey and Eisner awards. 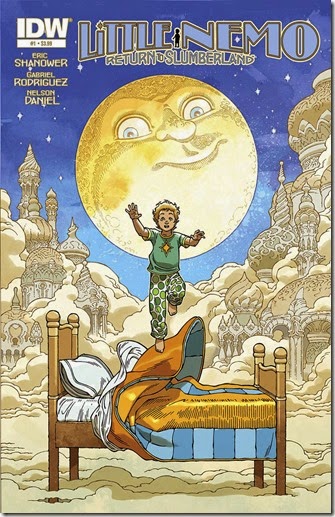 For those looking to introduce younger readers to the wonders of the comics world, this title will serve that purpose nicely.  It’s also a great read for all ages, especially anyone who appreciates the power of imagination as visualized on the printed page.

Slumberland, as you may guess from that title, is a dream world of unlimited wonder and scope.  Little Nemo: Return To Slumberland is a continuation of creator Windsor McCay’s storylines set in a pure fantasy world sure to delight the child in everyone.  McCay was a ground-breaking cartoonist who first introduced the world to Little Nemo and Slumberland back in 1905 in the colored Sunday page comics section of the New York Herald newspaper.  McCay’s images and use of oddly shaped and placed panels were ahead of his time by decades.   His art has influenced countless creators and continues to do so.

It’s not necessary to be familiar with the original material, as new creators Shanower and Rodriguez bring us all up to speed in the pages of the first issue.  The Princess of Slumberland is in need of  a new playmate. King Morpheus dispatches the wizards of the Royal Palace to seek out and identify the best candidate,. That happens to be James Nemo Summerton, a young man whose middle name brings feeling of nostalgia to the princess and makes him first choice.  Several of king’s minions attempt one after the other to arouse Nemo during his dreams and transport him back to Slumberland.  These efforts give us brief glimpses of he wonder of Slumberland, and usually end prematurely as Nemo falls out of bed and wakes up. 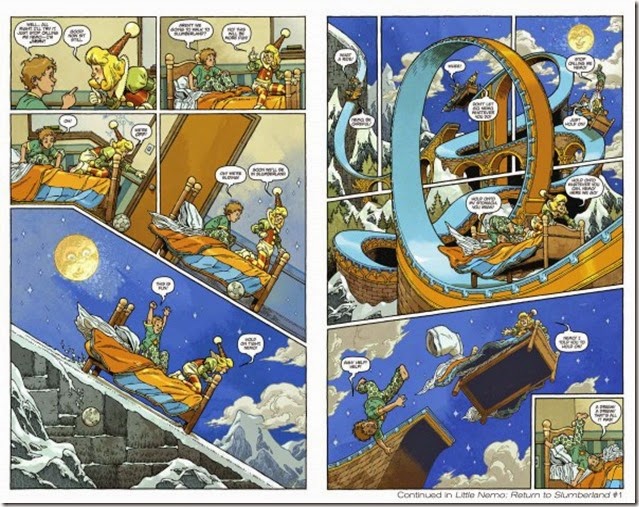 The script is full of whimsy and sets just the right tone for an introduction to this enchanted dreamscape.  Writer Eric Shanower is no stranger to this type of thing, having previously published his own series of works set in the wonderful land of L. Frank Baum’s Oz and other works for children.  The art of Gabriel Rodriguez is pure genius and up to the challenge of recreating the style and substance of McCay’s Slumberland. There is a bonus art gallery in the back of the book that shows how Rodriguez visualized Shaonower’s descriptions into images of pure genius.  Rodriguez is best known for his brilliant work on Locke & Key for writer Joe Hill.  The art team puts the finishing touches on this masterpiece with some stunning color from Nelson Daniel and fantastic lettering from Robbie Robbins.

This book can still be found on select comic store shelves, and I highly recommend that you get on board now.  Issue #2 comes out this month.  Wisely, IDW has made this a bi-monthly series so that the creative team can give it the proper attention without worrying about a deadline every 30 days.