Moonstone is a small Chicago-based publisher, who have survived among the bigger comics industry stalwarts since their inception in 1995.  They began with creator-owned characters and then picked up momentum in 2001 when they acquired publishing rights to a variety of licensed properties – most notably The Phantom and Kolchak: The Night Stalker. 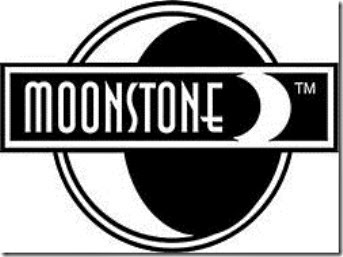 Their website self-describes Moonstone as “a fun little company who works ridiculously hard to bring escapist entertainment to the masses, whether it be in the form of comic books, graphic novels, trade paperbacks, novels or short story anthologies.  We consider ourselves the home for wayward thriller-adventure heroes like Kolchak The Night Stalker, Buckaroo Banzai, Captain Action, The Green Hornet, The Avenger, The Spider, The Saint, The Justice Machine, Domino Lady, Zorro, The Phantom, Operator 5, G-8, The Green Lama, Honey West, Sherlock Holmes, Airboy, Zeroids, Secret Agent X, The Phantom Detective, and so many more.”

Lately, they have been publishing more original novels featuring classic pulp characters. Adam Lance Garcia has written many of these, featuring The Green Lama.  Moonstone has just announced a new book to debut in early 2015. 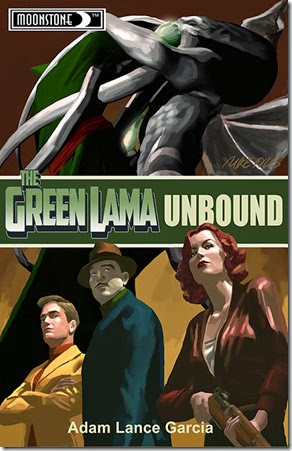 DESCRIPTION:  The stars have aligned and the sunken city is rising.  Kendell Foster Crossen’s the Green Lama returns in this fully authorized novel by Adam Lance Garcia. Racing across the world to rescue his beloved Jean Farrell, the Green Lama faces off against Nazis and demons from the deep, only to discover the terrifying truth behind his powers and his connection to the ancient evil known as Cthulhu.  A unique blend of horror and adventure, the GREEN LAMA: UNBOUND is a tour-de-force that redefines the classic hero and sets the stage for an astonishing new chapter in the Green Lama Legacy.

To learn more about Moonstone Books, go to