I’m very impressed with what writer Rick Remender has created here. It’s forced me to re-evaluate my opinion of his work. Previously, I read the first two issues of FEAR AGENT and liked them but not enough to want to follow. I still have a bad taste in my mouth from the mess he made of the last four issues of THE ATOM a few years back. I’m wondering if the title was already doomed by the point he took over and he got the call to finish it off. (The Atom power and suit gets handed down to a new player - - it’s not the classic Ray Palmer in this version until the final issue.) At the very least, I may have to re-visit some FEAR AGENT books.

I’m reminded of the clever ALMALGAM series of titles a few years back, featuring morphed DC-MARVEL characters (Iron Lantern, Dark Claw, etc.) that was creative, light-heartened and fun. Remender has borrowed some classic DC and Marvel archetypes and altered them while still making them recognizable enough to make us recall the original characters. Like the Amalgam books it’s very creative but very, very dark and fatalistic but still fun. (How could that be fun?, you ask. Because it’s still a superhero title, so there’s no need to get serious and despondent about it. It’s entertainment.) 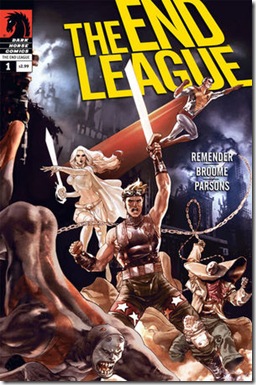 The most powerful man in the world, Astonishman, gets so full of himself that he doesn’t think things through properly or seek consultation. He just acts, and in Issue #1 we learn of his mistaken decision that plunged the world into its present apocalyptic state. Earth is almost destroyed and a byproduct of the radioactive fallout is that every one in a thousand individuals becomes super-powered. Instead of using their new gifts to aid humanity, these special humans use their powers for purely selfish reasons. So instead of a world with a multitude of heroes we get a world full of super-villains who branch off into separate gangs, enslave the non-powered humans, and fight each other for control of more territory. Astonishman, full of guilt for what he’s wrought, assembles a group of true heroes to combat the chaos and restore order. But the odds are against them, so they stay together mainly as a matter of survival while the villains continually try to pick them off. The end of the first four-story arc is definitely not upbeat, and a number of prominent characters die (and I doubt very much they will be “re-born”.)

I’m sure some comparisons to WATCHMEN will be and have been made and it’s easy enough to make a connection. However THE END LEAGUE is much more than just a rehash of those ideas and goes off from its beginnings in an entirely different direction. I find it to be much, much darker than WATCHMEN. In spite of what happens in Alan Moore’s classic saga there are under-currents of optimism. THE END LEAGUE is riddled with hopelessness, at least in Issues #1-4.

It’s definitely worth your looking into. The art in the opening run is premium grade, slobber and drool worthy. Matt Broome does an outstanding job. Some scenes just explode off the page. It’s too bad that mid-way through Issue #4 Eric Canete takes over and finishes pages 15-22. Canete’s art is decent but it can’t hold a candle to Broome’s work here. Seems like a bad decision to compare them like this side by side in the same issue. Maybe that had to be done in order to meet the book’s deadlines, so maybe Canete had to rush it a bit. In any case, I wouldn’t let a change in artists keep you from looking this title up.