Opportunities to meet authors, chat with them and ask questions in relaxed and casual surroundings don’t occur often.  So, it was a real treat to be introduced to three separate writers on the same day, at the same location.

I opted to ask all three writers (Cox, Parkin and Thompson) the same opening question: At what point did you decide to pursue what you do as a career? 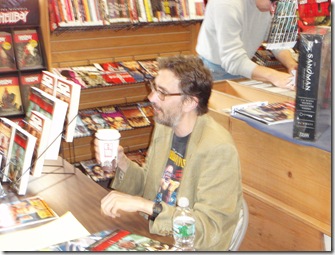 For Greg Cox his youthful aspirations to become a writer came to full fruition  while enrolled in college.  As an English Literature major his pathway became clearer as he distinguished himself from his fellow classmates.  Greg refers to himself as the “token hack” of his class whom he considered to contain an abundant number of “literary snobs.”   He is also very grateful for the guidance in creative writing he received there, including instruction from renowned professionals such as Vonda McIntyre.

He realized he was among the first of a few to appreciate all types of literature one day when an instructor rhetorically asked the class “who would demean themselves by writing novel-length adaptations of movies and television shows?”  It was G 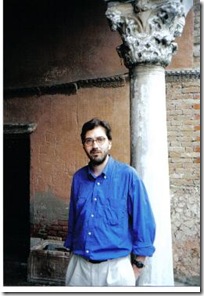 reg alone who responded by vigorously waving his hand back and forth in the air and shouting “I would!  I would!” and thereby earning his “hack” designation.

His first job in the field came in the form of an editor position at Tor Books (specialists in fantasy and science fiction titles) in New York City.  Tor Books would often be approached by movie producers about publishing and even sometimes finding writers for novelizations.  Greg volunteered one day to write an adaptation, and then became the “token tie-in guy” at Tor.  So his early years at Tor began as an editor taking part-time writing jobs on the side.  Today, Greg Cox is a full-time writer who also does editing work part-time.  He left NYC and moved to the Oxford, PA area several years ago. 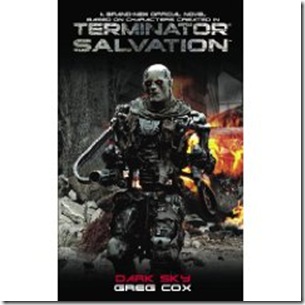 Greg has written adaptations of the Daredevil, Ghost Rider, Underworld movies, Star Trek series and novelizations of DC Comics Infinite Crisis, 52, and Countdown.  His latest original novel, TERMINATOR SALVATION (based on the current movie), was just released in paperback in October 2009.  He’s also working on a sequel to the recent Star Trek movie, as well as a novelization of DC’s Final Crisis.

When working in the comics medium he uses the writer’s script as the starting point, and then prefers to work from black and white Xeroxes of the art.  Cox says most of the time the final chapters he receives are in script form only and not completely finalized.  He often calls authors to find out what happens.  On one occasion when he called Greg Rucka, he learned that the writer had only a vague idea and was still fleshing out the details and still working out the mechanics and specifics.  When writing movie novelizations he generally works from the script as well as still photography or production art.