There are certain things that I do instinctively, sometimes on a subconscious level that I don’t become aware of until after I’ve finished.  After working ten years in a basic research function, observing, asking questions, documenting and constantly reporting opinions on new products  to a corporate marketing department I find myself sometimes going about my day 24/7 in “survey mode”, even when it involves my leisure time and/or my hobbies.  I see something.  I make a mental note. I recall it and attempt to analyze what it means.

OBSERVATION:  Despite predictions (since the explosion of personal computers in the 80’s) that written literature is out of style and that “nobody takes time to read anymore”  traditional fiction continues to sell and bookstores keep staying open and making profits.  Modern marketing is sophisticated enough to identify blossoming mass interest in a specific writer, style, or type of book and then turn around and enhance that popularity by a thousand-fold through promotion, publicity, tie-in events, etc.  Think of the popularity of Goosebumps, Dan Green and the DaVinci Code, J.K. Rowling and Harry Potter, and lately Stephenie Meyer and Twilight.  Adolescents can’t get enough of Harry Potter and the Twilight vampires. They buy all the books, see the movies, and gobble up the toys and fan publications.

OBSERVATION:  Over the last 5+ years I feel the comics industry has made a noble attempt to try to bring in new readers, specifically those of elementary and middle school age as well as the 16 through 20-year-old adolescents they have extended major efforts to entice to comics.  Both of the Big Two publishers have dedicated “young reader” lines with youthful versions of classic heroes, etc.  DC has adapted some popular cartoon series to comics.  Archie Comics has been at this forever with the Riverdale High School gang.  Boom Studios and others have revived the Disney books along with the popular Muppet series.  There are rumors of a  Harvey revival in the works. (Casper, Wendy, Hot Stuff, Baby Huey, etc.)   And if you explore the ever-expanding world of manga available there is a wide variety of “teen” or “young adult” comics out there, often with very mature themes.

QUESTION:  What better source can you think of for young readers interested in finding illustrated versions of their favorites and then exploring all that comics has to offer than a local independent comic shop?

OBSERVATION:  As I visit and patronize many of these comic shops along the Eastern United States I see plenty of evidence of their efforts to attract this audience.  For example, Captain Blue Hen Comics in Newark, DE (my most frequented shop) has an easy-to-find and  full multi-shelved section stocked with books for young readers.  Yet, in all my visits here and elsewhere I seldom see those younger readers in the comics stores.  Something has to happen to get them inside in larger numbers.

QUESTION:  Why should I care?  On the other hand, the argument has been made that modern comics are as good as they are because the publishers have recognized that their primary readership is an aging, more mature reader and have improved the quality of their output accordingly in order to maintain that core audience.   I care because I care about the comics industry in general, and would love to see their audience grow even larger.  New readers become new writers and artists.  New participants bring new ideas.  Fresh blood. Keep it premium blend and keep it circulating.

OPPORTUNITY:  What can I do?  Share what I know and what I love with the younger readers in my circle of familiarity - - - cousins, nephews and nieces, children of friends, neighbors, etc.   There are plenty of books out there that seem perfect to introduce to younger readers.  I can think of a few right off the top of my head - - the new Ultimate Comics Spider-Man, the new Batgirl, and one more that I’ll get to shortly.  I’m planning to single them out on this website whenever I can and perhaps my BC Refugees colleagues and I can begin to build a recommended list.   I’ll start that process today with these books and welcome future additions and contributions.  (I know Shane is very fond of Boom’s new Muppet series.  He wrote a very favorable review which sounds very encouraging.  I haven’t listed that book here only because I haven’t read it yet.)

QUESTION:  Why FEMALE FORCE, you may ask?   Aren’t comic biographies simply boring and doomed to low sales numbers because of lack of interest?  I think it depends on the subject matter.  For example, in spite of my admiration for Abraham Lincoln or JFK I don’t think many students have much interest in reading books about them today, even a shortened comics 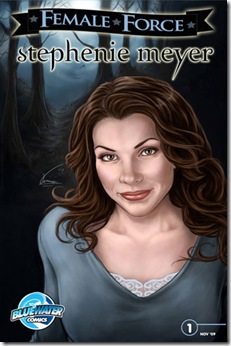 biography.  But if you focus on more contemporary figures and open it up beyond just the historically significant or political movers and include entertainers, popular writers, etc. then you have a bigger audience.  If you narrow that focus even further to prominent females, you hopefully become a magnet for a group of readers that comics has never enjoyed in large numbers – females, girls in primary school to adolescents, young women, etc.   That’s why I feel this can become a very important book.  Wouldn’t it be an interesting side-effect if a comics biography generated enough curiosity and interest to  learn more to send young people into books stores to see what awaits in the non-fiction and biography shelves?

QUESTION AND OPPORTUNITY:  What else can the comics stores do?

The most recent FEMALE FORCE, issue #9 which arrived at comics stores on November 11, features a biography of Stephenie Meyer, just one week before the latest Twilight film, NEW MOON, debuts in theaters.   Comics stores should explore any opportunities to get Twilight fans into their stores.  Why not get the cooperation of movie theaters and give away flyers that promote the comic and offer a percentage discount off the cover price (with a copy of the handout presented at the store)?  Get them in the store, ask them what other books, films, etc. interest them and show them what’s available in your good old neighborhood comics store. (Yikes, I just read an update.  FEMALE FORCE: STEPHENIE MEYERS sold out by Nov. 12 and a second printing has already been scheduled.  Why not issue a rain-check and take orders for those issues for those new readers?)

This issue also marks the very first biography to be adapted to a motion comic, now available through I-Tunes.  You can preview the motion comic here at

Is this a title worthy of promoting and featuring?  I think it’s very well done.  I admit to having a jaded opinion of comics biographies of anybody (no matter whether I admire them or not) - - it’s just not the sort of comic I would normally purchase.   If I hadn’t been shown an advance copy of FEMALE FORCE #9 (in sequence including the trade paperback, although all their covers say #1) I wouldn’t have made the connection to my earlier observations and opportunities.  Since it’s debut in early 2009, FEMALE FORCE has featured Caroline Kennedy, Condoleezza Rice, Hilary Clinton, Michelle Obama, Oprah Winfrey, Princess Diana and Sarah Palin.  The next issue will focus on J. K. Rowling.

There doesn’t appear to be any earth-shattering moments in the “true life” story of Stephenie Meyer.  Good upbringing, good schooling, good marriage, blossoming career as a writer. We learn little details from her life, such as meeting her future husband when she was four years old (but not really taking any notice of him), the numerous rejection slips from publishers,  and her persistence. The original title of her vampire sage was “Forks’ (for Forks, Washington where the story is based) until the publisher convinced her to change it.  The idea for the series came from a vivid dream she experienced. (Drat, I knew I should have written several of my dreams down while they were still fresh.  Note to self: better keep a notebook by the bed.)  It’s not fascinating details but a nice summary/background.

The writer Ryan Burton and artist Dave MacNeal apparently recognized this shortage of solid usable material, as they have book-ended the biography with a fictional -- (are you sure?) -- 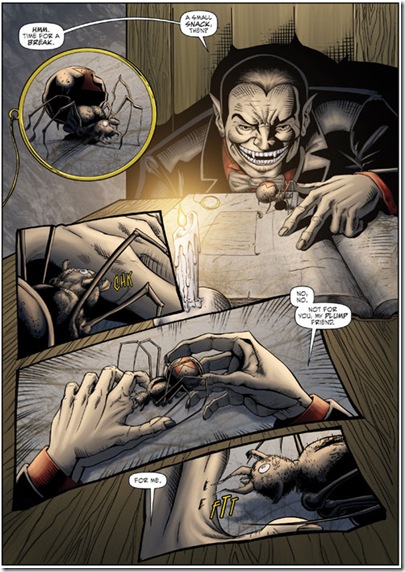 sequence featuring the original Count Dracula (although not identified as such). These scenes open in Transylvania and are moody and atmospheric and are a great tie-in to the actual biography. (Dracula is grateful for the publicity).

If you know some Twilight fans,  it’s not a bad idea to order some of the second printing of this book and introduce them to FEMALE FORCE.  Who knows, it may lead to a visit to the comic store.