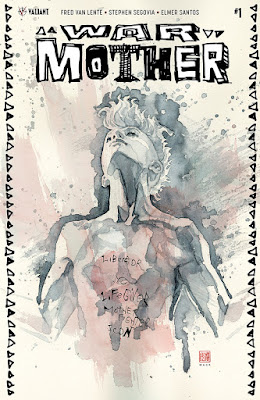 Fred also visited CBH last year on the release date of WEIRD DETECTIVE. He’s one of the most fan-friendly people in the comics industry and a great person to chat with.  If you missed the appearance last year, let this serve as your heads-up notice.

Also from last year, The 4001 A.D.: WAR MOTHER one-shot issue from August 2016 was one of the high points of the 4001 A.D. storyline that ran through the RAI-related titles from VALIANT ENTERTAINMENT.  See my review of that book, using the Archives link on the left and heading to August 06, 2016.

I was fortunate enough to obtain a digital copy of WAR MOTHER #1 from the nice folks at Valiant.  I’m glad I had time to review it and share with you here before the release date.

3) Meet Fred Van Lente and ask him to sign it for you. 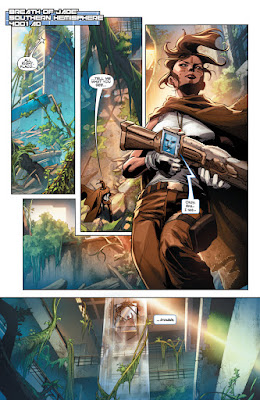 Last year we were introduced to Ana a.k.a. War Mother, who served as chief warrior and resource collector for The Grove, a communal village established in the aftermath of the 4001 A.D. devastation. Ana is assisted in her endeavors by Flaco, a huge symbiotic sentient rifle that holds conversations with her and acts as unofficial advisor.

One year later, as WAR MOTHER #1 begins, Ana is now the leader of The Grove.  Food and resources are scarce, and residents are becoming worried, angry and desperate for answers.  Hope comes in the form of an intercepted ancient transmission from The Montana, an old-school high rise complex constructed back in the days when glass, steel and concrete were still plentiful.

Ana sets out to investigate, which leads to the confrontation with some Urbanites, walking and talking pterodactyls that nearly eliminate a pair of cyborgs that Ana rescues and befriends. However, The Montana may not be the safe haven that Grove residents were hoping for.

It’s a good beginning to the first story arc of WAR MOTHER. Ana and Flaco are interesting characters and mesh together well. Here’s hoping it’s popular enough to get a second mini-series in the future.

STORY:  Well done. Van Lente begins with an awesome action scene and allows it to play out spectacularly.  He waits until we’re hooked to fill us in on the background details. (After we catch our breath). WAR MOTHER is a quick read that leaves you wanting more. The character of Ana is developed further and new details give readers a chance to empathize and feel a little sorry for her. On top of the challenges of leading The Grove, there are boiling internal conflicts within her close family to upset and distract her. Van Lente also manages to insert little humorous asides in key places (some references to gentrification and tribal emo-babble that flavor the dialogue, for example).  2.5 POINTS

ART:   Segova won’t bowl you over. He just carries out his role in workmanlike function, depicting both action sequences and close-up panels with extreme competency. The color selections are commendable and enhance the visuals, as I’ve come to expect from Valiant titles.  2 POINTS.

COVER:  All are evocative of the contents. The Mack cover is a personal favorite. 1 POINT.

READ AGAIN? You’ll want to. The little things that make the story special are easy to miss with just a single reading. 1 POINT.

RECOMMEND?  I love the characters of Ana and Flaco and the dynamic between them. Can’t wait to see it explored further. 1 POINT. 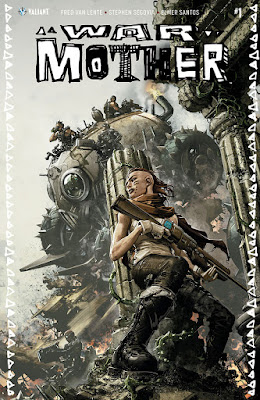