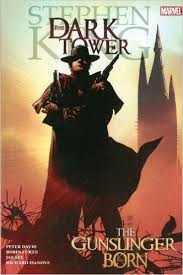 Stephen King’s mythic masterpiece, THE DARK TOWER, obtains a remarkable comics adaptation through the incredible creative team that Marvel and King assembled. I can’t think of a better testimonial to the power of the comics medium to enhance literary works. DO ANDROIDS DREAM OF ELECTRIC SHEEP (Boom! Studios) is another example, although it’s a faithful and extremely lengthy word- for-word adaptation compared to the skillful selection of scenes for this first graphic novel featuring THE DARK TOWER.

Rather than focus on just THE GUNSLINGER, the first volume of King’s epic, the Marvel adaptation pulls elements from that work as well as the fourth book in the series, WIZARD AND GLASS. The result is a complete narrative of the origins and early development of Roland Deschain, the last gunslinger.

STORY: Absolutely amazing. If King took his novels and reassembled them, he couldn’t have picked a better selection to start things off and introduce comics readers to his magical world. This paints a vivid portrait of the character development of Roland and reveals how his heart was hardened through early emotional despair, albeit among some heroic triumphs.  3 POINTS

ART: Gorgeous. The scenery and backgrounds are painted marvels as only artist Jae Lee’s style can provide. The depth of emotion that he conveys through facial expressions and body language is spot on. The inking and colors bring the story to vivid life. There’s a great feature in the back of the collection that sheds light on Lee’s painstaking process in creating such majestic panels. 3 POINTS.

COVERS: Every cover of the seven issue limited series, as well as the variants are featured in the back of the book. All are stellar, and worthy of the source material.  2 POINTS.

RECOMMEND?  I love King’s story. It’s a marvelous homage to various genres: heroic fantasy, horror, post-apocalyptic futures, science-fiction, western, crime - - all rolled into one epic tale. If this comics adaptation is your first introduction to the world of THE DARK TOWER, I envy you. 1 POINT.

KEEPER? An extra point for those works that I consider the finest examples of what the comics medium is capable of.  Everyone should read it, and comics connoisseurs need to add this to their collection. 1 POINT.

TOTAL RATING: 11 POINTS. No higher rating possible. On a plateau received for a short list of masterpieces. 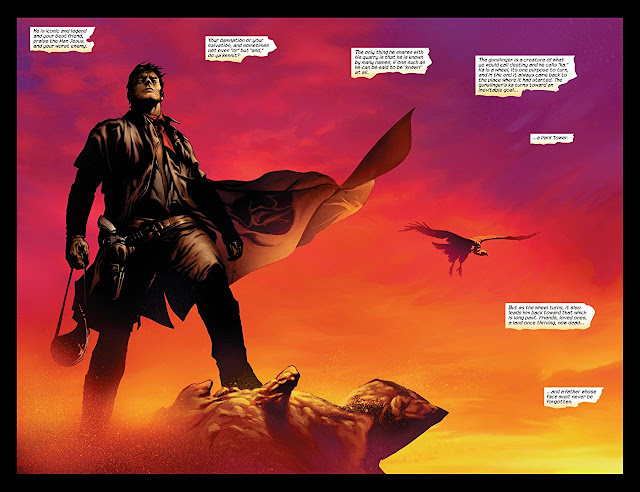