Hidden amongst the very entertaining but serious (and often dark) action-adventure series published by  Valiant Entertainment  are two successful titles that manage to take a light-hearted approach to story-telling and mix in some humor and satire in clever ways that don't insult the intelligence of the reader.  If you are not reading  ARCHER AND ARMSTRONG  and  QUANTUM AND WOODY then you are missing out. Good news!  Valiant has teamed up both couples in a mini-series called THE DELINQUENTS that debuts tomorrow. It is truly the perfect jumping on point if you have been curious about either of these books and weren't sure where to start. 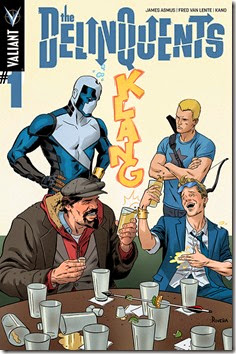 THE DELINQUENTS  is a funny book in every sense of the term.  It may not make you bust out laughing (that could be embarrassing, depending on where you choose to read your comics) but it will bring a smile, a grin, and possibly a little suppressed chuckle.  If it's not the situation, the jokes, one-liners, double-entendres, or the style of art that tickles your funny-bone then the complete package will win you over. After two readings, I'm eager to see Issue #2 and where this goes.

For the uninitiated, here's a short overview of the two eggs that hatched  THE DELINQUENTS. In the words of a reviewer (who we respect) featured in  BLEEDING COOL MAGAZINE #11: “Archer & Armstrong are two mythos-busters walking a very fine line on the sword's edge between order and chaos, hoping to keep the balance shifted properly”.  This same reviewer (a friend of ours) calls Quantum and Woody “an even odder and more dysfunctional couple as the world's worst super-hero team gets into and out of threatening situations purely by accident and come out smelling like . . . well, it's not roses."  In  THE DELINQUENTS both Archer & Armstrong and Quantum & Woody possess parts of a map drawn in code on a tattered pair of moldy, smelly boxers. The map, when put together and deciphered, will lead to the lost treasure of the Hobo King.  Whether the two teams will cooperate with each other remains to be seen.  Issue #1 seems to indicate that they will be adversaries. However, knowing the capabilities of each team, anything and everything is possible. The only certainty is that is will be funny. 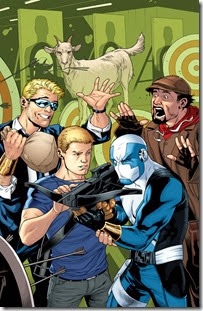 Many years before Armstrong paired up with Archer, he spent a lot of time as a vagrant, running with the citizens of the hobo kingdom, hopping trains and seeing the continent with just a knapsack for baggage along with the obligatory hip flask.  While escaping from an shotgun-wielding irate farmer, the feeble hobo Rudy (Armstrong’s companion) was shot and died from complications. He entrusted Armstrong with his most valued possession - - the treasure map written in hobo code on some underwear. Not the most trustworthy individual to give such a valued item to, as soon as Armstrong becomes distracted during a nightly fireside hobo hoedown, some junkyard dogs rummage through his belongings and end up separating the map.  In a wonderful panel montage that illustrates what happens to one half of the map over several decades (battlefield gear, flea market item, overpriced art deco object, etc) we see that it finally ends up in the wrong hands. Recognizing the object as a treasure map, these new owners of dubious intent then hire Quantum and Woody to recover the missing half. The issue ends with Stinky Wally, who works at a hobo museum/village, tipping off Armstrong  about the half he no longer possesses. 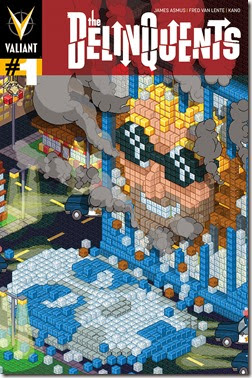 Among the highlights of Issue #1 is the discovery of hobo hieroglyphics, the crudely scrawled symbols that serve as code/messages to fellow hoboes. Many of these symbols are detailed throughout the story; and the symbols that represent Quantum and Woody are hilarious.  THE DELINQUENTS makes fun through satiric commentary of modern farming, dominated by giant chemical conglomerates who utilize gene splicing and synthetic proteins to develop their tainted agricultural goods -  and smothering the smaller organic farmers. There are several jabs taken at “hippies” and the 21st century vestiges of same - - exotic religions, mysticism, holistic medicine, Zen and gurus.  There are several Easter eggs planted throughout the art, as well as asides to current popular culture including an implied shout out to X-O Manowar, another popular Valiant character.

Just as amusing and entertaining as the story, the art by Kano is worthy of repeat inspections. Kano utilizes some very expressive faces and puts a lot of detail into some very tiny panels. Because the story features much exposition and dialogue, there are many multi-paneled pages as well as the use of smaller, wider, panoramic views. Once in awhile Kano is allowed to move the story along in caption-less, word-balloon free panels and he pulls it off in great fashion. Apparently he also inked and colored his work and it really shines.  These are great visuals.

There is a lot to appreciate in this book.  Make sure you don’t miss it. 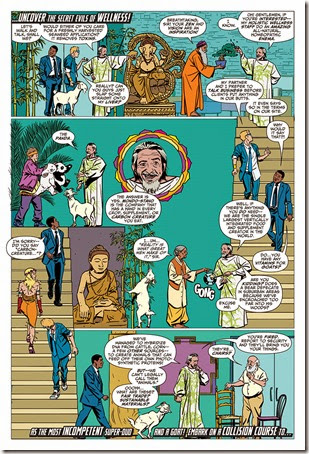 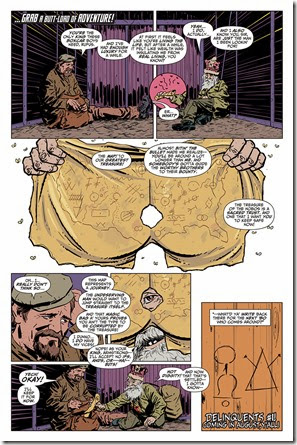