Burning Up With AVENGERS VS. X-MEN Fever (and spoilers)

The cover art is what enticed me to pick up this issue.  You can’t beat a good Greg Land cover - - and this is a really good one.  Colossus/Juggernaut and the Red Hulk exchange looks of extreme rage as they head butt and fist bump each other. 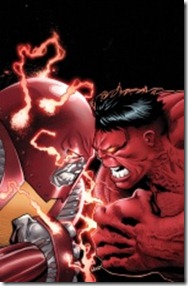 The contents deliver on the promise of  a great knock-down, drag-out battle between these two.  Land’s illustrations are perfect for this.    His characters are very expressive.  The story is equally evocative.  In between the battle scenes, Gillen gives us an inside look at the current thought processes of several characters.  (Events in UNCANNY X-MEN #11 take place during AVENGERS VS. X-MEN #1 and #2.)

Gillen reveals to us why Namor stands with the X-Men and it makes a lot of sense if you understand the character of Namor.  He made his choice because of the choices that Cyclops made.  In his own words - - “this is a man stating the autonomy of his people . . . this is a species of 200 declaring war on the United States of America.”  What follows while we gaze on Land’s interpretation of Cap’s shield taking the full impact of Cyclop’s focused eye beam is a caption of Namor’s thoughts that is so true to Namor that it’s brilliant in its’ simplicity - - - “I admire Scott Summers.  I would have his woman, of course. But that’s a compliment, in its’ own way.”

It’s also quite appropriate for Gillen to share the thoughts of Colossus/Juggernaut as he prepares for battle with the Red Hulk and struggles internally with his light (restrained and in control = Colossus) and dark (irresponsible and burning with rage = Juggernaut) sides.  In the meantime, Hope wonders why no one understands or trusts her anymore and takes a decisive break/retreat from her protectors.  The decision by Cyclops at the end of the issue to initiate his own “Avengers Protocol” (code words) and make public his own mutant declaration of independence is bold.

A good issue with one star each for script and art that makes you yearn to see what happens next issue. Yet, at the same time it’s not essential to the main A vs. X storyline and can be skipped if time and/or budgets are more pressing. 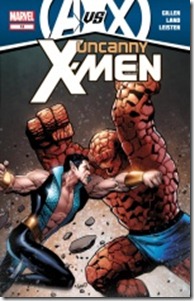 Here’s another great Land battle cover.  The looks of determination on the faces of Namor and The Thing would be even more effective if it didn’t appear that the Thing was wearing a diaper ( - - maybe FF blue instead of the FF white that was on my copy? Looks like Marvel made a correction to their web page, where I obtained the photo at right.)

This issue centers around the search for Hope, and the X-Men split into five teams to investigate five different probable locations she may be hiding in.  In the Tabula Rasa refuge an X-Men team runs into an Avengers team, both looking for Hope.  The ensuing battles are entertaining and lusciously depicted by Land.   After a few skirmishes, the X-Men get new info about Hope’s true location and depart.

For comedic relief there’s some funny banter going back and forth between Namor, Sunspot and Hepzibah - - all flirtation, braggadocio and innuendos.  The Thing provides most of the amusing responses for the Avengers team.

As much as I enjoyed this, I’m feeling that Gillen is just biding time and making a mild contribution to the A vs. X storyline until he can move on and tell the story he was really planning on. I might come back for that, but I really don’t want to read another issue like #11 and #12 until then 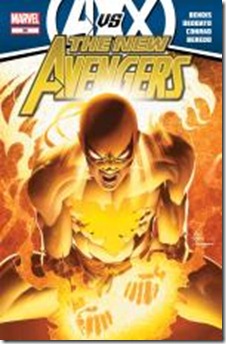 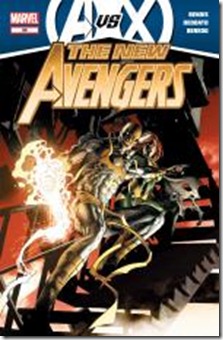 I highly recommend these two issues solely on the basis of the amazing artwork that you will drool over from the team of Deodato and Conrad.  It’s absolutely fabulous and helps enhance the story by Bendis in a dynamic fashion.  (Also,  based on this story I wouldn’t mind seeing what Bendis could do with a arc or two on the current IRON FIST title.)

Fans of the NEW AVENGERS team may be disappointed to find that none of the team members are present in this storyline.  The only connection to the team is that the story takes place in K’un Lun, the birthplace/training ground of the current Iron Fist and New Avengers member Danny Rand.

Events in these two issues (and as I assume = the upcoming #27 and #28) take place several centuries ago.  Bendis is establishing a connection between The Phoenix Force and K’un Lun.  I initially thought this was a little bit of a stretch to try and build a semi-mythological foundation around the Phoenix (as if it needed anymore) and wasn’t sure I bought into it.  But, I’m going along with it for the sake of a good story.  It certainly helps that the illustrations are flat-out gorgeous.  I’ve never seen this quality of work from Deodato before.  Wow.  Also,  a knowledgeable employee (Brock) at New Dimension Comics in Cranberry Township, PA informed me that Bendis planted the seeds for this some time ago.

Master Yu Ti has frequent dream prophecies involving a bird of fire, a girl with crimson hair, and the end of the world.  He finds a woman servant with flaming red hair in the village (an immigrant from the last pilgrimage to Earth) and recruits her to train as an Iron Fist.  Naturally, in addition to the red hair she bears an uncanny (pun) resemblance to Jean Grey.  So, is Bendis implying that the Phoenix Force has always been seeking out a red-haired avatar?  And, this apparently only happens when Earth is visited?  Perhaps this will be explained further in the next issue or so.

Revert back to present day where master Lei Kung consults the ancient manuscripts, finds the references to Phoenix, and wonders why he wasn’t ever told about this.  The explanation is that “the guardians of K’un Lun before us declared the secrets of the Phoenix to be kept until the time of its return.  That time is now.”  Apparently some one (Marvel editorial department) has a bad memory or K’un Lun would have been involved the last time when Jean Grey manifested the Phoenix powers.  So now the current Iron Fist must be “told what he has to do” or “the Earth will fall.”

The smartest man on Earth in that long-ago time, Leonardo Da Vinci, is recruited to help see K’un Lun through the prophecy to its conclusion.  As the training progresses, the girl Fongji (flaming bird) seems to learn how to control and balance both the dragon (Iron Fist) and the bird (Phoenix) powers surging within her.

I hesitate to proclaim these issues as essential to the Avengers VS X-Men saga  but I can’t stop feeling that they are. Obviously, the Earth survived this encounter with the Phoenix Force centuries ago thanks to what happened here.  So this may be the seed or clue to how the current threat may be handled now. So, the upcoming issues of NEW AVENGERS may actually reveal the answer to the conflict.  That settles it - -  consider this necessary reading! 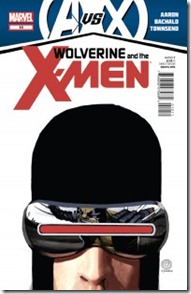 It’s a simple cover but I like it a lot.  It’s the image of a menacing Wolverine with extended claws that is revealed in the reflection off Cyclops’ visor that makes it special.

Most of the story takes place after the initial Avengers vs. X-Men beachfront battle at Utopia and Hope’s subsequent flight/escape.    Cyclops, Emma Frost, and Magick visit Wolverine’s school and hope to change his mind about which side of the fence to stand on.  The banter between Scott and Logan as they stroll together on a (amusingly illustrated) tour of the school is priceless. Reading about the two sides debating back and forth like this is worth the price of admission.  I don’t want to spoil your fun by giving any further details about this.  Wolverine does not change his mind.  However, some others at The School are leaning in the other direction.

The rest of the story gives more detail on the current inhabitant inside the body of a younger-looking Angel.  Is it Warren with some memory loss, or someone else? - - a real “angel”  perhaps?   This doesn’t get clearly answered --  but that’s the fun of it.  Aaron provides more clues/information but isn’t telling just yet.  Student Genesis also has some identity conflicts and gets lied to in order to alleviate some inner fears.

Next issue the “Death Commandos” from the Shi’ar empire arrive.  I’ll be checking back here next month.