FLASH BULLETIN! Reported sighting of BC Refugees in Delaware

Banished long ago from their regular haunts in Downingtown PA, the BC Refugees scattered to various locales but from time to time they show up in small groups to look for nests and gather more bedding.  Several of them were sighted on Saturday, May 5 in places where you may expect to find them - - haunting their favorite comic shops in the area - - - CAPTAIN BLUE HEN in Newark DE  and THE COMIC BOOK SHOP in Wilmington, DE . . . . . . . . 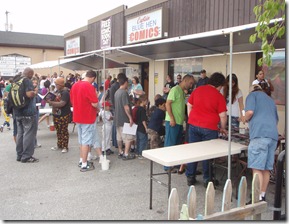 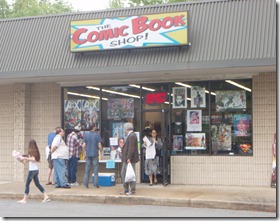 Both locations were “hopping” all day Saturday so if you missed the sighting it is probably because the BC Refugees have been known to blend in with the crowd.   BC Mike was all over CBH most of the day but was spotted at an impromptu meeting at CBS with BC Jeff and Bill.  BCs Gary (Flash) and Seth (Kid Flash) were in and out early, while Captain Aaron was needed to protect the universe (so he couldn’t get off work).  BC Dan was on special assignment - - so special we don’t have any more details. BC Shane was stranded on Manhattan Island but luckily managed to find a good spot to be in. 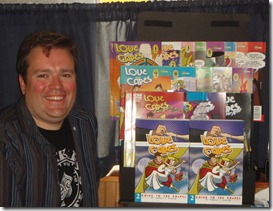 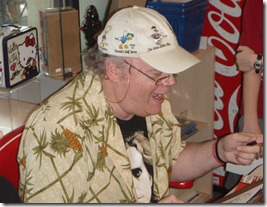 Among the many guest artists at CBH, Tom Zahler (above left) and Neil Vokes (above right) were the most jovial, and deservedly so.  Tom has a number of projects (in addition to more LOVE AND CAPES)  for 2012 and FLESH AND BLOOD VOLUME 2 debuts later this month with more of Neil’s horrific (in a good way)  art.   A source at CBH told me they had an unofficial count topping 2,000 visitors for FCBD 2012, their biggest audience ever as well as their best sales day ever. 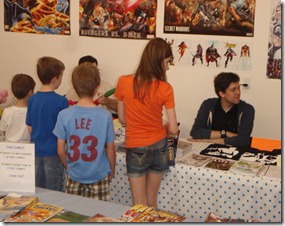 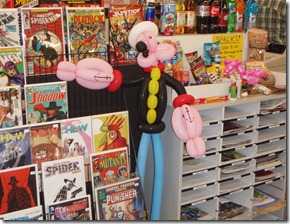 CBS also had an artist meet-and-greet area (above left) for sketches, etc. as well as a special appearance by the Balloon Guy.  Balloon Popeye helped draw attention to some of his favorite books.   In a wise move, CBS scheduled their grand re-opening (new location) on FCBD and also enjoyed record crowds and great sales.    The BC Refugees were very encouraged to see young people in attendance (from pre-school through junior and high school plus some college students).  They (or their parents) were buying books.  Hooray for comics and their contribution to literacy!