AVENGERS / X-MEN: Versus + Round Three + spoilers 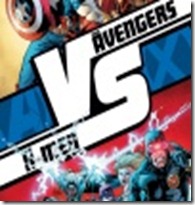 As the credits page proclaims, AVX: VS will take fights from the AVENGERS VS X-MEN limited series and “expand them into ALL-OUT SMASH-UPS!”  Every issue will focus on two different  “AWESOME BRAWLING . . . KNOCK-DOWN,DRAG-OUT WHUPPIN”.  The events in this debut issue feature fights that take place during events in AVENGERS VS X-MEN #2.  Those fights are:

I came to this title without any expectations of significant or revealing story content.  I came  with expectations of viewing some good old-fashioned battle action.  I came  anticipating  great art.  I came expecting to have a fun and entertaining read.  My expectations have been met - - especially when the first story is illustrated by the dynamic Adam Kubert.  I like what he did here with some subtle changes to his regular style  -- maybe credit some of that to the rest of the art team.  You like big panels, and action that stretches across two pages?  You’ll be happy you came here.

Without telling too much and spoiling this for you - --  Tony Stark comes to the battle better prepared than Magneto.  Obviously a man in an iron suit should be cautious around a gigantic magnet, right?  Both protagonists reach out to space for some reserve power - - Iron Man via satellite and Magneto in the usual awesome but also exaggerated exhibition of his powers.  Although Magneto gets some new information in doing this and seems to have a slight change of heart or hesitation/reluctance to continue.  This ends with the victor that I expected to win this round.

While reading the AVENGERS VERSUS X-MEN PREVIEW/PRELUDE  issue I speculated that the Scarlet Witch might have a prominent role in later events in this series.  There is a small hint in this story that lends credence to my suspicions.

There are also some interesting and trivial captions throughout both stories with AVX FUN FACTS.  Mostly informative but not extremely useful or important, they add a light touch to the battles and keep the element of fun alive.  In one sequence the caption FUN FACT states that the Utopia Tower that Magento displaces and brings crashing down on Iron Man weighs 170 tons.  A few panels later Iron Man refers to having a 200 ton pile of rubble dropped on him - - - and the next FUN FACT caption refers back to this and states  that “Iron Man likes to exaggerate.”  Ha!- - said comment meshes nicely with his newly-restored/enhanced arrogance/bearing in these stories.

Of the two battles here, the first one is my favorite. However,  this is just as much fun and the art is equal to the task.  The FUN FACTS in this story are rather amusing.  More insults get traded back and forth as well.  It ends as I also anticipated.  Hey, I’m 2 for 2 on guesses in this book!

Neither of these battles ends in any of the combatants needing hospitalization; and neither of the losers seem to be immobilized for long.  It just seems like they accepted the defeat.  I suppose if anything major is going to happen, it would have to occur in the main book.  As long as I’ve as entertained in this series as I was with Issue #1, then I can accept that easily. 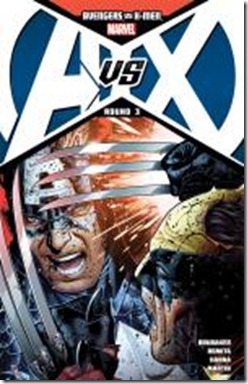 I’m just going to say that even though this is the third book, nobody should be expecting this series to lighten up and coast just yet.  There are a number of significant things that go down in this issue.  I’m surprised and also very happy to see that things aren’t so predictable.  Please keep me guessing, Marvel.  Brubaker takes over the scripts for this issue, and brings his dramatic flair at an appropriate time.

If the team roster page is any indication,  the odds have now shifted in the X-Men’s favor by a ratio of 24 to 16 - - with Wolverine the lone member straddling the dividing line between the two teams. He’s been with the Avengers so far - - but will that swing the other way after events in this issue?  We’ll see - - and that’s why I read these books.  By the way, Storm is no longer on the fence and has clearly sided with the X-Men while her husband Black Panther fights for the Avengers.  Now that’s a dysfunctional marriage!

While the fights were going on Hope managed to escape, but not before a confrontation that didn’t end well for Wolverine.  When he starts to recover, he is greeted by the news that Cyclops and his team have surrendered to the Avengers!  What?  That won’t last - - this series would be wrapping up much sooner if that holds.   Meanwhile, Cap and Tony have an amusing discussion/debate about what to do next. As it turns out  Logan was right to be suspicious of the surrender.

This issue revolves around Hope trying to avoid detection/capture by either of the two parties now seriously searching for her  (both the X-Men and the Avengers) and trying to cope with the frequent manifestations of the Phoenix Force within her body (even though the P Force is still not that close to Earth).    There’s a mole supplying information to one side while keeping the other up to date at the same time.

Cap and Logan have a difference in philosophies on how to handle Hope and come to blows over it.  One of them encounters a setback that could suspend their involvement for awhile.  The six page battle (viewed through infrared goggles, apparently) is the best work by Romita this issue.  It could have been a story in the VERSUS book except it’s a bit more serious and with serious consequences in the aftermath of this battle.

Good issue.  Still happy with this series.  I am enjoying it.  However, it doesn’t even come close to the impact and entertainment value of THE CIVIL WAR  (which I consider a true highpoint for Marvel).  It’s still early so I may still change my mind.  And gladly if it happens.