Both of these creators will be among the many artist guests at the Free Comic Book Day celebration at Captain Blue Hen Comics in Newark DE this Saturday.  Here is a brief review of their work:

Originally published in book form in 1995, FIST STICK KNIFE GUN is auto-biographical and relates the grim realities of urban violence.  It is the personal story of a young Geoffrey Canada, one of four boys being raised by a single parent (mother) in a rough South Bronx neighborhood in the late 1950’s.  At the early age of four, a young and impressionable Canada gets a lesson in street survival and begins to learn what it takes to grow up on the streets and how to avoid becoming a constant victim of bullying, abuse and violence.  It is a sad and powerful story with a strong message and warning at its center. 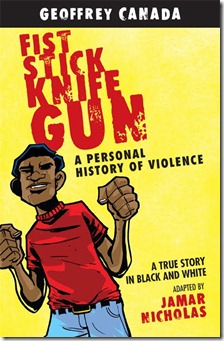 Jamar Nicholas is the Philadelphia-based artist and educator who took FIST STICK KNIFE GUN and adapted it in 2010 for a graphic novel treatment.  Taking this disturbing narrative as a template and illustrating the pivotal events of the novel adds even more impact and takes this work to a higher level.  It will be impossible for most readers to finish this book and not be a little disturbed or uncomfortable from watching the transformation from cooperative passivism to confrontational activism that occurs as the young man develops, grows older, and forms deep-set values, morals and principles  - - all driven by a need to survive and avoid beatings.

Jamar Nicholas adeptly conveys the severity of this survival tale in blood-less black and white,  avoiding any elaborate gory details yet still conveying the impact of the constant fights through the body language and painful expressions of the characters.  The art style employed is similar to that found in many graphic novels aimed at a younger audience, and will be easy for those readers to follow.  Through use of dark lines, gray tones and shadows the grimness of the situation is made all too clear.  Nicholas has a nice method of using facial expressions to clearly depict the emotions occurring without resorting to the exaggerated styles found in many comics for younger readers.   I am very impressed how he uses body language and changing facial expressions to show the progress/development of the Geoffrey Canada main character.  We can see in these changes how a young Geoffrey transformed  from an uncomfortable and cautious introduction to the “fight club” to a comfortable and confident protagonist and then to an arrogant and confrontational teenager.

When Canada finally begins to carry a gun around in the early 1970’s he takes stock of his situation and makes a key decision that changed his life and direction.  Today he is the founder and director of the Harlem Children’s Zone.  The warning/message of the story is  detailed further in a very moving written epilogue by Canada at the end of the novel.

Despite the controversial content of this graphic novel, it deserves a spot in every school library and public library.  By adapting FIST STICK KNIFE GUN to a graphic novel format Nicholas has made it more accessible and attractive for younger readers.  The message is clearly stated and not likely to be misconstrued by youthful readers.  Even better, parents should read it as well so a family discussion can occur. 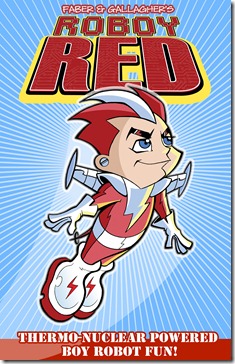 This graphic novel came about as one of the positive results of Kickstarter,  an internet fund-raising campaign to obtain printing costs for ROBOY RED, John Gallagher’s BUZZBOY and the soon to be released LEON by Jamar Nicholas.

ROBOY RED NUTS & BOLTS is a very attractive and colorful  presentation that should appeal to any beginning young comics reader who want to move beyond stories featuring licensed properties into tales of original characters.  ROBOY RED is a popular cartoon character who (through the magic of some creators at the Roboy Red theme park ) is brought to life as a “nuts and bolts” boy robot.   He escapes from this and tries to start a new life with the help of some young friends.    His adventures involve stopping the bad intentions of some very colorful villains and are written and illustrated in a style that evokes classic comics from a simpler, more innocent time - - riddled with funny situations, silly puns, and asides to nostalgic figures and icons of the past.

It’s a great introduction to comics and super-heroes for the younger reader and serves a dual purpose as an introduction to comic book creating to help inspire young people to try their own hand at this.  The back of the book has several well-written and illustrated insights into the creation and development of Roboy Red as well as a preliminary guide to drawing and scripting a comic book.

Both Faber and Gallagher are founding members of Kids Love Comics, an organization promoting literacy and fun through comics and graphics novels.  Along with Jamar Nichols they host the Comic Book Diner, a podcast about the business and art of making comics and graphic novels.