Written by currently hot creator Sam Humphries (FANBOYS VS. ZOMBIES, OUR LOVE IS REAL) HIGHER EARTH #1 sold out in pre-order one week before it’s release and is already into a second printing.  Inventive and action-driven story-telling.  Bold and imaginative art.  Science-fiction adventure. One dollar first issue! That’s enough to do it for me.  I was impressed with the debut issue. 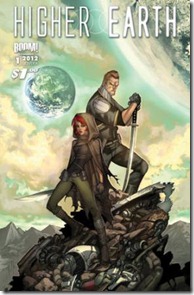 In big, bright panels HIGHER EARTH kicks right in on the first page as a padded-uniformed man (soldier?) drops from above into a heap of garbage.  It’s a garbage world, and he’s looking for someone. Her name is Heidi and she survives on this desolate garbage-strewn world by traveling inside a huge armor clad mechanical grizzly bear.  She’s the only character that is actually given a name so far.  I had to learn the man’s name (Rex) by reading the text previews page in the back of the book.  That’s where I also learned that Higher Earth is the central command nexus of an empire of wildly diverse versions of Earth. “Space is dead” and travel between worlds occurs through portals in the sky.  Rex is apparently travelling illegally, as another soldier (fully armored) is tracking him.

After a series of conflicts, Rex and Heidi escape to “Sunshine Earth 4” , a Moebius-styled world of skyscrapers and flying dirigibles.  This series is off to a great start. 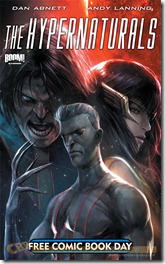 ems to be a trend at BOOM!  Studios to introduce several space-based, cosmic /science-fiction themed series ( HIGHER EARTH, EXTERMINATION, PLANET OF THE APES, etc.).  If  these are as well-done as their other series are, then we science-fiction fans are in for a real treat.  The latest is THE HYPERNATURALS debuting in July.  Here’s a great script team with an impressive track record (ANNIHILATION, CONQUEST, etc. sagas at Marvel) paired up with some equally-adept artists whom they have previously worked with. HYPERNATURALS recalls many great series, including THE AVENGERS, THE LEGION OF SUPER-HEROES, and THE GUARDIANS OF THE GALAXY.

In a future galactic society, individuals with hyper natural gifts are selected, trained and appointed to an elite team charged with protecting the universe from various threats.  Every member serves a five-year term, with a limit on three consecutive terms (due to stress, etc.).  In the series former team members are called back into service after the current team vanishes.  The FREE COMIC BOOK DAY edition is a prequel to Issue #1, highlights the members of the vanished team and reveals the events that led up to their disappearing while investigating a new deep space threat.  This is definitely a series to keep an eye on and one that I will be following (waiting for the trade edition).

Brian K. Vaughan moves over to Image where he creates a brand-new space opera series with artist Fiona Staples.  I liked the debut issue, but not enough to want to follow this monthly.  I was lukewarm to SAGA after one read, but it held my attention better on a second reading a month later.  I’m going to hold off and follow some of the critical reviews.  This may be one of those series that is best read in trades, the same way I followed his masterpiece, Y THE LAST MAN.  Considering that Issue #1 is now in its’ third printing, the reception to SAGA appears to be widespread. 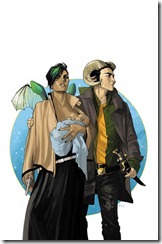 In a battle that involves several planets and various races, a prison guard falls in love with a rebel captive.   They escape together and bring a new child into the world while on the run.  The first issue introduces them as well as the villains, a ruling race of humanoids with television sets/monitors in place of their heads.  It looks as silly as it sounds, especially a sex scene between two t.v. heads.  I’m sure Vaughan has a message buried in here somewhere.

The book reminds me in a way of the classic MOONSHADOW  (Epic Comics) in it’s light, airy art style and cursive narrative that includes some philosophy in the captions.  The narrative voice also changes without notice - - sometimes even from the thoughts of the new daughter as if in a flashback sequence involving her parents.  I’m keeping an eye on this book.