If you enjoy reading tales that remind you of the works of H. P. Lovecraft and evoke the same kind of dark discomfit then you will also enjoy this storyline.

Of all the characters in Mike Mignola’s B.P.R.D., Abe Sapien was the most interesting one.  THE DROWNING reprints  the five-issue mini-series that chronicles his first solo adventure back in the early 1980’s.

One hundred years earlier, a two-gun wielding paranormal investigator named Edward Grey uses a flying dirigible to sneak up and land on a ghostly ship taken over by a warlock and his demon minions.  Grey kills the demons and plunges a  Lipu dagger (crafted by monks and possessing special demon-killing properties) into the catatonic body of the warlock that the demons were apparently beginning to revive. In the process the ship runs aground and sinks to the bottom along with the drowning Grey. (We later learn that he survived,)  It’s an ominous and perfectly depicted 10-page opener that sets the stage and tone for the story to follow. Despite the absence of any dialogue (just short captions and a quote from an old English sea poem) this introduction to Edward Grey makes me sorry to see him go. Maybe Mignola will bring him back for another story.  I’d welcome seeing his long-haired, bearded grim countenance and equally grim determination/purpose again.

In the absence of Hellboy, Abe Sapien is given his first solo assignment to dive and recover the 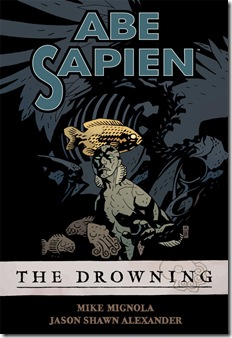 dagger as well as any bodily remains of the warlock.  Abe is self-conscious, unsure of himself, and more of an observer/bystander until events force him to take action  - ironically because his presence acts as a catalyst for the coming disaster.  Mignola crafts an absorbing tale, intriguing as always when it comes to B.P.R. D.  - - somehow I find these stories more serious and dark versus the Hellboy stories.  The art by Jason Shawn Alexander is spot-on and similar to Mignola except that it enhances his style rather than mimic it.  The use of shadows and mist is particularly effective, as are the colors by Dave Stewart.   It’s a creepy story that involves an old fisherman's’ town , a castle that sits on the site of a former massacre and leper colony, some Lovecraftian offspring, a witch/sorceress and her obedient spawn, and the aforementioned demons who seek to resurrect not the warlock, but the ancient spirit/devil that inhabits his flesh.  What more could you ask for?

I never read TLOEG: BLACK DOSSIER based on the advice of a highly trusted source who told me it was extremely disappointing.  Later I heard rumors that there were some troubles with DC and the way they handled the book, with Alan Moore ending his association with them.  So this latest installment (promise 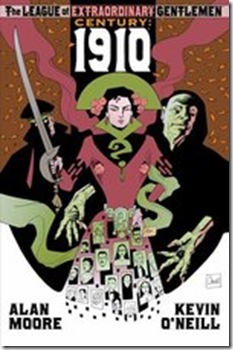 d as the third and concluding chapter in the LOEG trilogy) is published and distributed in the U.S. by Top Shelf Comix, an imprint that I plan to explore further (www.topshelfcomix.com).

This is going to become one of my favorite books of the summer of  2009. I can’t see much else topping it for quality, literary merit, creativity and just plain entertainment.  I was fascinated by the world of TLOEG as envisioned by Moore and O’Neil and thoroughly enjoyed reading this, one of 3 chapters of CENTURY,  a promised  216- page epic that will not see it’s final chapter until 2011.

The trilogy will span 100 years, beginning with events in Book One occurring in 1910 London.  Book Two takes place in 1969 (and the pulp-styled text fiction in the back of the book provide 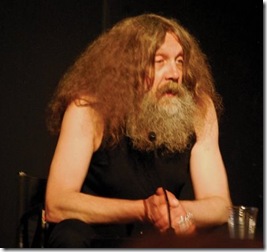 s clues and hints as to what may come); and Book Three brings it into the modern world of 2008-2009.  I love the way that Moore utilizes secondary characters from classic literature and the skill with which he incorporates them into his story, adding to their character and making them his own.  Some familiar faces are back here = Allan Quatermain, Mina Murray, and Orlando (the gender-switching immortal who apparently shared the method of gaining eternal life with both Quatermain and Murray during the events of BLACK DOSSIER); as well as some new additions – the psychic detective Carnacki, the suave thief Raffles and villain occultist Oliver Haddo (as per Somerset Maugham).    Events in CENTURY:1910 revolve around the dying Captain Nemo who wants to pass his legacy/possessions/navy onto daughter Jenny, who would rather run away until trouble makes her “call i 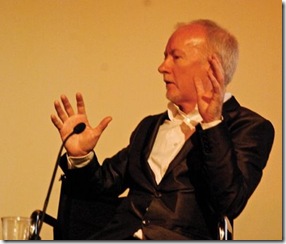 n the navy” for help (she actually becomes more ruthless and pirate-like than her father and is responsible for the slaughter that ends the book).   Jack The Ripper returns to London after a hiatus and the bloody murders begin anew.   Haddo’s cult is hard at work setting the stage for the ascension of the “moon  child” (and I expect this to crop up in all it’s finalized forms in the next book).  Carnacki has troubling nightmares that hint at all these things and the League sets out to investigate.  They are actually helpless to prevent anything from occurring and end up being witness mostly.  In spite of that, Moore spices up the detective work with snappy exchanges between the characters and personal insights into all of them. All is not well in League-land, whose members now seem to defer (some reluctantly) to Mina for direction.

There is an obvious chemistry between Moore and League mainstay artist Kevin O’Neil that works so well here.  There is more to be seen in the backgrounds of O’Neil’s depictions that enhance the story and add to the enjoyment. I won’t spoil it for you by pointing any of that out so you can discover it for yourself.  If that wasn’t enough to make this an interesting book, there’s an operatic element running throughout it that reminds of the amazing way that Tim Burton’s Sweeney Todd movie meshed classic musical structures with a grim and dark tale of murderous revenge. One of the minor characters here is the proprietress of the seedy Cuttlefish Hotel (as well as ale house and whore house), who relates many of the events she witnesses in a sing-song fashion (complete with notes) in the same manner as many a narrator of musicals/operas. in Moore’s nod/tribute to The Three-Penny Opera. Jack the Ripper also likes to sing about his deeds and intentions. I tried following along to the tune of “Mack The Knife” and it works in some places but not in all of them. An absolute delight, worthy of many a re-reading. A real keeper and highly recommended to you.