Mike looks at Previews August: What else will you be getting besides Marvel titles?

Marvel accounts for the lion’s share of my order for August. It’s time now to take a look at the rest of Previews and conclude my threat.  ( I humbly defer back to Shane for the next write-up in 30 days on September titles - - although I didn’t mean to replace his column - - I’m content to provide supplementary information.) 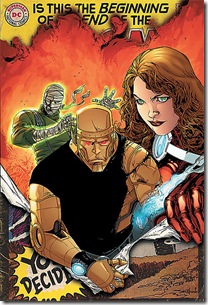 ith JMS as writer) I’m going to wait and see what the response is.  I’ll browse through them when Captain Blue Hen gets their shelf copies and maybe pick up some if the artwork looks good.   I will pick up DOOM PATROL #1 just to see if Keith Giffen still has that old magic that made his 80’s run on the Justice League so entertaining.  The back-up feature in this 40 page book is Metal Men and they were an old, old favorite (although I haven’t really liked any of their revivals so far).  And I’m getting THE FLASH: REBIRTH #5 – I loved the first two issues and want to see how this all comes out. Script and art have been excellent so far.

WAITING FOR TRADE EDITIONS:  Mostly the current Batman titles and several Vertigo series (more on those later).  I’m most interested in Grant Morrison’s run. I’ve already got BATMAN AND SON, THE RESSURRECTION OF RAS AL GHUL, and BATMAN R.I.P. in trade editions waiting for me to get to them, and will probably order the first collection of his BATMAN AND ROBIN (with the great Frank Quitely on art) when that is available. I’m also interested to read the feedback on Kevin Smith’s BATMAN: WIDENING GYRE and Greg Rucka’s current DETECTIVE COMICS run - - and if those prove to be worthwhile I’ll pick up those trades also.

SINGLE ISSUE ORDERS:  CROSSED #9 concludes the horror series (zombies!) by Garth Ennis and Jacen Burrows, a team that always puts out interesting books. I picked up the #0 issue, scanned it and liked it enough to keep ordering. Now that it’s  complete I’ll read it and review it here sometime in August-September.  What I have read or heard so far is that it is very intense and dark (and doesn’t end well). 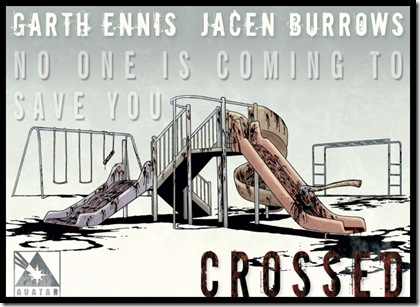 I’m also ordering NO HERO #7 Auxiliary Edition by Warren Ellis and Juan Jose Ryp – another team I appreciate. Ryp is very good at visualizing Ellis’ creations. I’ve read the first two issues and liked them very much.  Looking forward to reading the entire work once it concludes.  A book that I’m not going to order the first issue of but I think bears watching (and waiting for the eventual trade edition) is ABSOLUTION by Christos Gage and Roberto Viacava.  It’s about a future society where the heroes work with law enforcement and John Dusk (main character) decides to take justice in his own hands and kill a criminal,  and is troubled and given trouble for his actions.

WAITING FOR TRADES:   ANNA MERCURY 2: ULTRASPACIAL DREADNOUGHT VANAHEIM. now at Issue #3 of 5.  I loved the first ANNA MERCURY series by Warren Ellis and Facundo Percio and plan to review it here someday.  I’m feeling more patient now and glad to wait for this one. I’ll also wait for the trade of IGNITION CITY (Warren Ellis, Gianluca Pagliarani) a science fiction retro punk alternate world now at issue #5 of 5.  If you’re a fan of the late TRANSMETROPOLITAN series by Warren Ellis then you may be ready for DOKTOR SLEEPLESS which takes the satirical-political side of science fiction to a new level.  I’ve got single copies of the first twelve issues, and will continue on in trade editions (series now at issue #14).

GRIMJACK: THE MANX CAT #1 . . . . . I loved the Ostrander/Truman series from First Comics and thought the recent limited series revival by IDW was just as good. I’m looking forward to this one. This is supposedly a story that was written but just now seeing a comic book treatment in a team-up of IDW and ComicMix.com.

WAITING FOR THE TRADE of . . . . HERCULES: THE KNIVES OF KUSH. (The first issue was offered in July Previews)  I absolutely loved the first series from this new comics company. (Their offerings are definitely worth checking out – all high quality.) The first set of tales was closer to the actual mythology than the treatment by other comics companies, and I expect this series to continue in that vein, exploring Hercules mercenary wanderings and the darker/impetuous side of his character. The artwork looked painted and was gorgeous to view. Don’t know if that will remain since all I’ve glimpsed so far are the covers, but I’m willing to take a chance.