It was great to see everyone at Gary’s on Saturday (and we missed those of you who couldn’t make it), so thanks again to him and his family.

I was planning to get a few more books read before doing another write-up, but a number of people said the trade reviews were helpful so let’s talk about what I’ve read in the past couple of weeks and I’ll try to do this more often. (Which may be hard if Marvel keeps releasing three dozen books a week…) I Kill Giants TPB: I read the first issue of this when it came out and didn’t care for it, but Shane is passionate about it which was enough for me to give it another try. I’m pleased to say that I have no idea why I didn’t like it the first time around – I was utterly captivated by it this time. To describe it too much would rob you of the joy of discovery, but I’ll say it’s the story of a young girl, her school, her family and, yes, giants that is at once funny, terrifying and heartbreaking. One thing that particularly worked well for this jaded comic reader is that Joe Kelly played with my expectations about the fantasy element, which made the story all the more surprising. The art is a semi-manga style that isn’t usually my thing, but it’s perfect for this story also because it allows the blurring of the real and the fantastic. I honestly think this one belongs on everyone’s shelf, folks. (Except that the family stuff might be too intense for some kids.) Extras: behind the scenes commentary and sketches. 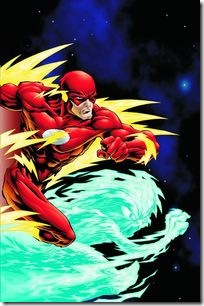 Flash: The Human Race TPB: This book collects the second half of Grant Morrison & Mark Millar’s run on The Flash during Mark Waid’s late-90’s sabbatical, and I had forgotten how good these stories really were. Or maybe I just didn’t appreciate them at the time because I saw them as marking time waiting for Waid to come back. At any rate, the two story arcs here, “The Human Race” and “The Black Flash” are basically Silver-age classics done in a modern style, with a lot of great Grant Morrison ideas (but not overwhelmed by them, maybe because of Millar’s involvement.) I was also struck by how well these stories reflected the themes of Waid’s work, and I had forgotten that they actually set up Linda and Wally’s wedding. Also included is Morrison’s charming post-Crisis version of “Flash of Two Worlds” from Secret Origins #50, drawn by one of my all-time favorite artists, the late Mike Parobeck. Extras: none, unless you count the Secret Origins reprint. 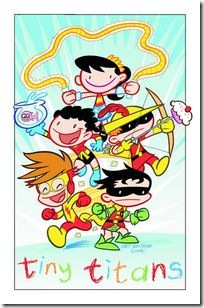 Tiny Titans: Adventures in Awesomeness TPB: Admittedly not for everyone, but I find it irresistibly adorable and fun. For sure kids will love it – I hear that the creators get mobbed by them at conventions. It does a little bit make the same mistake the DC & Marvel kids’ books often do by making jokes that require knowledge of the regular continuity (like the “Crisis on Infinite Earth” parody in Marvel’s old “Mighty Mouse” series), but so far it’s done here in such a way that I don’t think kids will notice that they’re missing part of the joke. (Example: Principal Slade and Mr. Trigon leave Mr. Darkseid in charge of the school for the day and he declares a “Finals Crisis.”) Extras: a couple of puzzle pages from the original issues, and it’s printed at regular comic size instead of the usual kids’ comics digest size. (OK, not really an extra but a good thing nonetheless.) 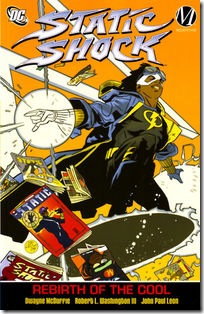 Static Shock: Rebirth of the Cool TPB: Reprints the first 4 issues of the ongoing series from 1993, and the four-issue revival from 2001. I would have rather seen the first 8 issues of the original series because the miniseries, while good, was intended as a revival of the Milestone line and it is packed to the gills with extra characters. The original stories hold up almost perfectly – the only thing that dates them a little is that they are pre-cell phone. Other than that, the teens act like teens and Static, even though he comes from the Spider-Man archetype, was original at the time because of his inner city background. (Not just his color.) I would never suggest that you buy something that you don’t like, but if you have the slightest interest in this book I urge you to get it because the Milestone material was all top-notch – Dwayne McDuffie and John Paul Leon are still doing great work today, for instance -- and deserves to be in print which may not happen if these early volumes are not supported. If this isn’t your cup of tea also coming soon are collections of Hardware and Icon, which are terrific subversive takes on the Iron Man and Superman archetypes. (Actually Icon is not really about the title character at all, but we’ll talk about that when the book comes out.) Extras: variant covers. 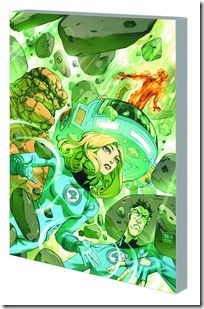 Fantastic Four: True Story TPB: I’m a fan of the whimsical, as you may have figured out, and I just love this book by Paul Cornell (currently one of my favorite writers) and Horacio Domingues (whose style fits this story perfectly.) It’s about the FF saving the realm of fiction (Reed: “To look into this I’ll have to create a new field of human endeavor. Give me a couple of days.”), and I know how that sounds but Cornell has the characters down perfectly, he’s got something to say about the role of fiction (without characters having to wear armor made of stories and beat the crap out of each other – that one’s for you, Bill) and the plot and dialogue are just clever as hell. Again, maybe not for everyone, but worth a shot at only $10.99 retail. Where else can you see Johnny Storm hit on the sisters from Jane Austen’s “Sense and Sensibility” (and one of them fall in love with Ben Grimm)? Extras: none. 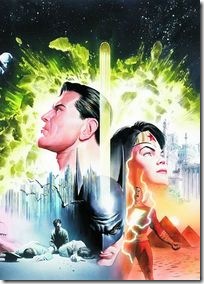 History of the DC Universe TPB: The original post-Crisis Marv Wolfman/George Perez history from 1986 under a new Alex Ross cover. I either never bought the original 2001 collection or can’t find it, so I’m glad to have this on the shelf. You probably already know if you’re interested in this or not, so I’ll just say that a lot of the history is still valid and the art is still terrific. Extras: none.