If you can’t figure out what this comic is about from that title, then I’m guessing you’ve been living for decades in a cave without a DVD player and no access to cable television.  VAMPIRE VIXENS OF THE WEHRMACHT is a fast-paced horror comic driven by action, rooted in World War II history, and dripping with blood, gore and tantalizing sexual imagery.  What makes it work is a light-hearted approach to the subject matter, all in fun but never silly or stupid.  You may find yourself laughing at several of the scenarios or chuckling at the devilish dialogue.

VAMPIRE VIXENS OF THE WEHRMACHT debuted at the Glasgow Comic Con in July 2013, and is the brainchild of primary creator Alex Ronald.  Ronald is a former comics illustrator who worked primarily in British series back in the 1990’s, and this marks a partial and very welcome return to the comics format.  The one-shot story was well-received and the first printing sold out at the festival, with stock of the second printing almost depleted.  Digital copies will continue to be sold through the shop on the webpage noted above.

What impresses immediately with the opening prologue pages is the photo-realistic style of Alex Ronald and how he uses inks and color to add the appropriate shading and depth.  Dimensions and proportions are spot on and stand out when intended.  Ronald is also very adept at illustrating male and female anatomy along with depicting naked pagan rituals.

The action begins in 1940 London, with fears of an imminent German invasion by Hitler’s forces. After learning that the Nazis have revived and enslaved four ancient female vampires (from a site in Tunisia, Africa), Winston Churchill (perfectly portrayed here) forms the Special Occult Executive team. A core member of that team (we are only introduced to two members) is one of the Nazi vampire women, now freed from Hitler’s enslavement through the mysticism of necromancer Aleister Crowley.

The other member of the team is Morris, a chaplain as well as “a former member of the Royal Marine Commandos and a Vatican-sanctioned exorcist” and obviously appalled and offended by who he’s been teamed up with.  He’s frequently in argument with the former Nazi tool, and has to keep this vampire vixen under control as she continually taunts and tempts him with sexual puns and innuendos. We never learn her name (Libyenah) until 22 pages into the story, but it’s doubtful that any readers will fail to remember her character.  She is adorned in leather (a sleeveless vest with no shirt, just a big zipper down the center) and below the waist wears only a lock-free leather chastity belt that features a cheek-free back.  In her kinky boots with lots of buckles, she is a real temptress, leather clad, sexy, and packing a firm load of sass.

The British also employ a team of psychics who uncover a Nazi plan for a supernatural attack on England.  They are four elderly, hat-wearing ladies sipping tea while they channel Nazi spirits.  They will remind many Monty Python fans of the sketch where The War of the Roses is reenacted by members of a women’s tea club, swinging their handbags in fierce battle and screaming their lungs out.

The new SOE team must sneak into the Black Forest in Western Germany, interrupt a midnight satanic coven (naked witches and naked Nazis) in order to steal away a small portion of Adolph Hitler’s anatomy that was removed by his mother during childhood, a spherical object that is apparently a power source for the supernatural forces that will be turned against England.  The battle that ensues is full of blood and bullets complete with exploding body parts.  Libyenah get extra credit for her impromptu choice of creative weapon. 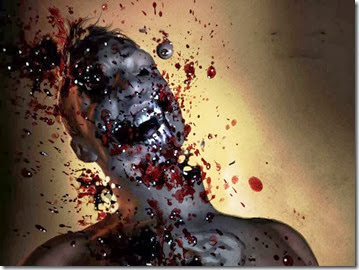 VAMPIRE VIXENS OF THE WEHRMACHT is worth your attention.  You will be entertained, amused and possibly stimulated.  Alex Ronald, please come back for more.  Another one-shot issue is in the planning for late 2014, in a chapter titled “Arses High”.

Alex Ronald currently resides in Glasgow, Scotland and was a regular artist in the 1990’s for the British comic 2000 AD, mostly drawing the character Judge Dredd.  He also spent some time working for DC Comics, as an artist on LOBO.  Since 2000, he’s been mostly involved in the computer graphics industry as a digital 3D modeler and 2D concept painter, working on TV commercials, video games, films and kids TV shows.  Some of his other work can be viewed on his blog at http://alexronald68.blogspot.co.uk/.

When asked why he chose a WWII story of vampires and Nazis for his return to comics, Alex responded: “Painting blood thirsty vampire women, wartime action and gore is my therapy after all the nicey, cutesy day job artwork.  It’s also a throwback to all the war comics I used to read as a kid in the 70’s (but in a very X certificate fashion).”