Review: SINK will suck you in and drain you 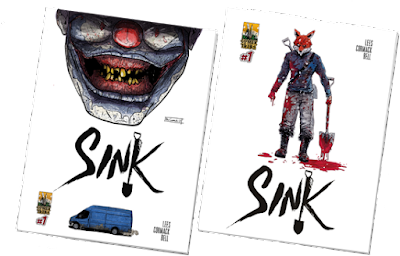 It’s been a long time coming, as followers who “got in the van” more than a year ago can attest.  Following a successful Kickstarter campaign (that was endorsed by BC Refugees), SINK #1 finally arrives on comic shop shelves. If you are a fan of horror comics, you don’t want to miss it.

SINK #1 is a horrific tour de force of the dark side of Glasgow, Scotland. It paints a bloody portrait of the late night roaming of various and sundry crazies who engage in their grisly behavior while most of the town is sleeping.  What makes this even more disturbing is that the choice of victim of this torment is completely random — he just happened to be out and about.

After a vigorous night of drinking with friends, a young man misses the last bus out of Glasgow and has to walk home.  However, based on the way the bus is illustrated and the creepy interior colors and shadows, it might be a good thing that he’s not riding it this night. The streets he passed by so often as a transit passenger become threatening when traveling on foot.

His encounters with the homeless, rambling mad men, and thieves become stranger and stranger.  He’s chased by a maniacal gang who hope to earn promotion by putting “meat” on the table for the boss. Enter Mr. Dig, a ruthless shovel-wielding commando type in a fox mask.  There’s also a blue van with a posse of evil clowns with a bloody initiation rite.

When I first learned of SINK via the Kickstarter campaign, my impression was that the story centered around the blue van and the killer clowns.  The samples of concept art were excellent, and vivid enough to encourage me to “get on the bus” and get ready for a wild ride.  The blue van even gets a mention on Page Two of Issue #1, to add a little apprehension via foreshadowing.

While I fully expect to see the van and clowns again before this series ends, this is not the focal point of SINK.  Every issue promises a different and disturbing story (I’ve seen preview copies of Issue #2 and #3 - - and they don’t disappoint.) All these episodes occur in the Glasgow borough of Sink Hill, which I believe is a fictional creation of the author’s imagination.  Not a place I’d want to visit anyway.

Let’s hope your local comic shop decided to take a chance on this and order some shelf copies.  If you didn’t join in the Kickstarter campaign and get an advance copy, you should be able to order it. It will be worth the wait.  I’m rooting for SINK to get enough notice to warrant a second printing.

STORY:  Effectively creepy.  We learn just enough of the main protagonist to feel a little sorry for his plight, and fear for him. The story aims for the jugular and doesn’t let up once it applies the initial pressure.  2.5 POINTS

ART:  Cormack colors his own pencils and inks, and doesn’t spare the bloody red. Shockingly effective and garisly graphic.  The background detail in the street scenes brings the town to life.  2.5 POINTS.

READ AGAIN? For sure. 1 POINT.

RECOMMEND? Absolutely. I suggest collecting the series,  especially after reading the next story, which chills in a different vein without overloading on excessive imagery. 1 POINT.

TOTAL RATING: 9 POINTS out of 10 possible. Near perfect.