Teaching an old dog new tricks: The Old Testament gets dusted off

EDITOR’S NOTE:  Between November and December there are a large number of new series and debut issues being published. We will do our best to provide some previews of the better quality works, and help you decide where to spend your hard earned dollars.  Please don’t fall into the rut of only buying titles from one or two comic companies. There are too many deserving publishers out there and we need to spread the wealth around so they all can survive. 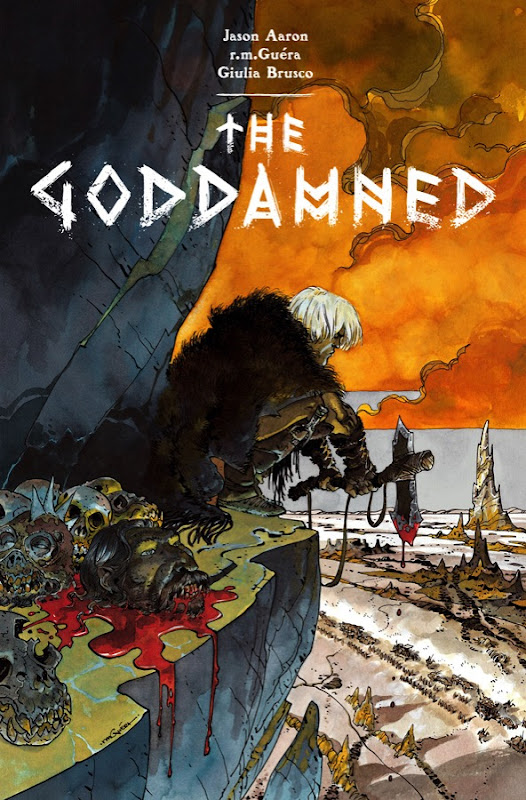 Jason Aaron is an extremely talented writer with a creative imagination.  I hope that he never signs an exclusive contract with Marvel or DC to write their licensed properties.  His work with established characters (Wolverine, Thor, etc) is usually good and always promises a decent story.   But his creator-owned originals are head and shoulders above the licensed work.  His original material just kills it.  Proudly display your freak flag, Mr. Aaron.  Long may it wave.

THE GODDAMNED is another superior effort from Jason Aaron’s creative cranium along with an accomplished assist from artist r. m. Guera  (small letters per preference).

The two-page opening depicts a barren landscape with no vegetation and a few bone white carcasses partially buried in the dirt. The caption quoting the Book of Genesis 6:5:6 leaves a solid clue as to what this story is all about.  THE GODDAMNED is a Biblical epic that puts a savage spin on events taken from the Old Testament. It’s a tale of survival and the living is brutal.

The story occurs 1600 years after Adam and Eve were banished from the Garden of Eden.  A young boy whose garments show a slight upgrade from standard caveman apparel discovers a naked man, throat cut and left for dead in a pile of waste.  When the man is apparently resurrected with no visible scars the boy tries to befriend him and become his traveling companion.  As the man says: “I had a family once. It didn’t work out.”

What follows are twelve pages of garish mayhem as the stranger gets his revenge against the band of civilized speaking cavemen who stole from him, the Bone Brothers.  It’s one man in berserker mode in a melee with many.  It’s no contest.  Stranger wins and gets his gear back. 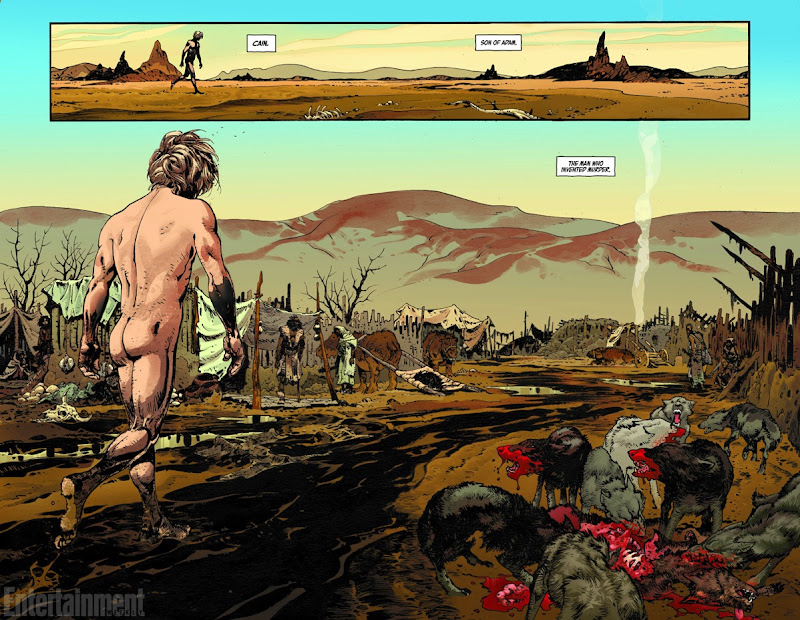 As we learn a little more about the stranger it becomes apparent he has serious anger issues.  He hates his parents, who were kicked out of life in paradise when they messed up.  He hates his brother., and eventually kills him.   He hates his curse, which has forced him to endure hell on earth for nearly 1600 years.  As the captions reveal, he is Cain.  Son of Adam  The Man Who Invented Murder.  The Man Who Cannot Die.

I have a feeling that in the hands of Aaron, this version of Cain will deviate greatly from what little we know of him from various editions of the Bible.  Near the end of the issue, another biblical figure emerges quite different from what we might expect.

If the story sounds too simple, trust me it won’t stay there for long.  But if you’re the impatient type, just give a second look  at the incredible art, inks and colors used to illustrate the tale.  r. m. Guera is a major talent, and his style gives Aaron's bending of the Bible the proper atmosphere and visualization.  I wonder if artist Frank Thorne was an influence.  His characters remind me of Thorne’s late 1970’s incredible work on RED SONYA at Marvel Comics.

When Aaron and Guera get done, the Old Testament will never seem the same.