Back To The Future comic duplicates the movie magic

Never underestimate the staying power of a popular movie.  Thirty years later, the BACK TO THE FUTURE film trilogy is still being enjoyed by old and new audiences. October 21, 2015 was a big day for the film and its fans as many print and video news outlets devoted headlines and air time to covering the various celebrations of the films occurring in towns across the United States and elsewhere.  In our neighboring area, the town of Newark, Delaware did it up right. (See earlier coverage in our Archives section for October). October 21, 2015 was significant to the 1975 movie, as it was the date that the time-traveling Delorean sports car was set to arrive at. It was also the date appropriately chosen by IDW Publishing to debut a new comics series dedicated to the franchise. 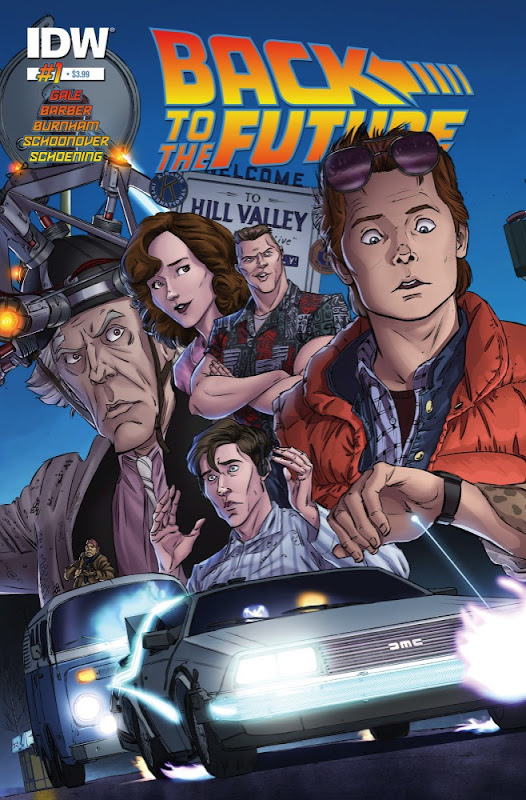 IDW also did it right, by selecting creative teams that were both familiar with the source material and also huge fans who would respect the project and treat it correctly.  Additional kudos to IDW for involving the original script writer for the movie, Bob Gale, who assists by writing or contributing to every story in the comic. IDW has made a four-issue commitment to the project.  Of course, sales and fan demand will help determine if the series continues beyond that.

Rather than present a long story arc across four issues, every issue will stand alone and focus on “untold tales and alternate timelines” with complete stories, one or two per issue.  Every story adds more background information that helps to flesh out and explain the minutiae of the world of Back To The Future. That is a wise choice.

“When Marty Met Emmett” explains for the first time exactly how the two partners in time travel met.  Would be rock musician Marty McFly is threatened by a punk rock band who want to borrow some equipment from him.  His amplifier needs a new tube and Marty soon learns that all the available replacement parts in town were purchased by Doc Brown, the wacky eccentric inventor.  He tries to visit him but finds an elaborate maze and obstacle course at the entrance to Doc’s garage.  Marty is the only person to solve the riddles, which results in impressing Doc enough to offer him a job.  What is most appreciated about this story is that the main characters speak and act and display mannerisms true to the film versions of them.  In some of the panels, I can almost hear the lines being spoken in the voice of Michael J Fox.

“Looking For A Few Good Scientists” is a humorous account of the time Doc Brown almost lost a chance to work on a famous project by pretending to be something that he’s not.  Just like the films, this is the same quirky Doc Brown that we’ve come to know and love.

Issue #1 wraps up with a nice article by screenwriter Bob Gale outlining what his plans are for the comics series.  Finally, the back of the book shows cover images for all 34 of the variant covers produced for Issue #1.

If you’ve been wondering if the comics versions or spin-offs can do justice to the original films, look no further than right here for the evidence that all things are possible in the right hands.