EDITOR’S NOTE / SPOILER ALERT = If you are a Batman fan and already plan to purchase all four issues of this series to read at one sitting, then stop here.  If you read this review, it will spoil many of the details for you.  Just buy it.  To all others considering a purchase of this title = go ahead and read the review. While it does spoil some of the story, it won’t ruin it for you.  It may just help you make the decision to pick this up.  We believe that you should, for several reasons. Keep reading. . . . . .

The first three pages of this story open in very dramatic fashion and lead the reader to believe that everything has come down to the final battle between Batman and The Joker.  Both are dying and Batman indicates (in the captioned narrative) that he’s “ready to go all the way.  And do it.” (This I have to see.  Which means I’m already in for the four issues.)  Other readers may be thinking (along with us) that this is a very bold move to put this hint of a final battle at the very beginning of Issue #1 of a four-issue limited series. Then a flashback sequence begins on page four, and we readers begin to have our doubts.  Things may not be as they seem.

Batman seems to be losing his edge.  It takes far too long to defeat his opening opponent.  He nearly doesn’t win.  It seems a virus has infiltrated the Bat system.  Not just the computer and technology, but Batman’s physical system as well.  Alfred helps trace the origin of the virus to Berlin and Batman is off and on the trail.  The nature of the way the threat was communicated to them makes Joker the early suspect. Alfred’s instincts prove to be right.  The first crime scene that Batman investigates in Berlin has Joker traces all over it. 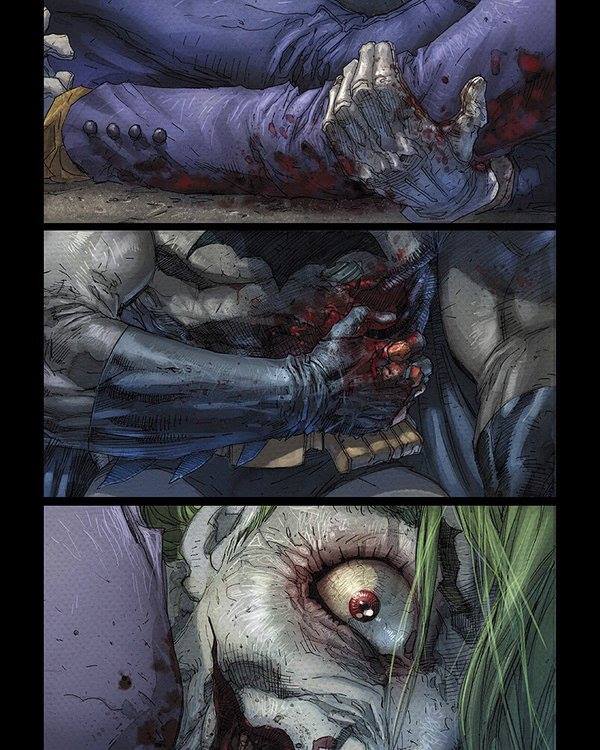 Its not long before Batman runs into the Joker, in the midst of torturing a female computer hacker, the one who infiltrated the complex data systems of the Batcave.  Naturally, Batman senses a woman in peril and fights first, questions later.  The questions reveal that both he and Joker are infected with the same virus and both have been following different trails to try and uncover the perpetrator and get the antidote. The trail then leads to Prague.  We’ll all learn more next issue.

I have to admit to being pulled into this story, but it ended very quickly.  I was under the impression this was a deluxe edition promising a longer than normal story considering the $4.99 price tag.  It does turn out to be a 30-page story, longer than standard.  It just reads too damn fast.  So, why should you bother?  Here are the reasons . . . .

ly downside to this is the $5 per issue price tag.  Publishers take heed!  If you’re going to raise prices you need to be sure you are offering extra value.  It’s bad enough at current $2.99, $3.50, and $3.99 prices.  When you consider that you can read a comic book in 20 minutes on average, that’s not an effective use of your money. A good paperback novel takes much longer to read and can last for days or weeks.  Yes, art costs more than literature.  And comics are a combination of the two mediums.

Batman Europa is worth the price of admission. However, if all comics go up in price, I predict a sales decline which would likely result in more titles being cancelled by the publishers and leaving us fewer options.  That would be a sad day.