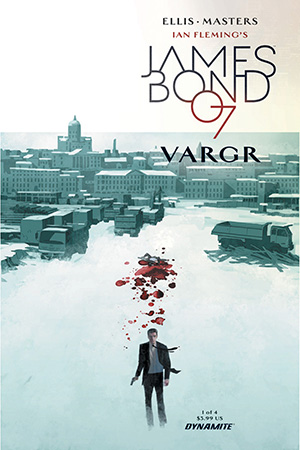 Issue #1 of the new series is impressive. Granted, a good amount of the first story needs to be dedicated to introductions and set-up and this can sometimes be boring and tedious for those already familiar with the character from films and books.  However, Ellis manages to get it accomplished quickly and fills the reader in as the story moves along rather than using a flashback or summary.

The art by Jason Masters is dynamic and fluid, and reminds me of the great work done by Paul Gulacy on some of those earlier James Bond mini-series for Dark Horse in the 1990’s. James Bond, as visualized by Masters, is a neat combination of the chiseled facial appearance of actor Daniel Craig (the current portrayer of James Bond in the cinema) and the rugged handsomeness of actor Sean Connery (the original star of the James Bond films).  The pages of dialogue-free action scenes really lend the book a movie-like experience and atmosphere.

As far as the story is concerned, this James Bond also exhibits the more brutal fighting style of Daniel Craig, and combines it with the suave sarcasm and witty one-liners of Sean Connery (before things morphed into the cornball groaner one-liners scripted for Roger Moore).  The banter between Bond and M and administrative assistant Moneypenny is especially well done.   Recently, the film series updated for the 21st century with a black actress portraying Moneypenny.  James Bond the comic does it one better by casting the MI6 director M as a black character as well as retaining a Moneypenny like the current films.  Nice touch, and tastefully done.  M is still a proper English executive and emotes as expected.

Issue #1 opens in snowy Helsinki with six pages of wordless action featuring flight and pursuit across a construction site.  We are not sure the pursuer is agent James Bond until the fight ends and he is identified.   The scene shifts to a flophouse in London where a new and dangerous drug is making the rounds.

As Bond begins a meeting with M to hear about his next assignment, I am reminded of a similar way that the current film (Spectre) begins.  However, it could be purely coincidental and in no way does the comic copy the movie.

In Spectre, Bond takes out an assassin in Mexico City and returns to London to learn that a new regime is looking to dissolve the “double-O” agent program.  In “Vargr”, Bond  sits down for his meeting with M and is greeted with this opener from M:  “isn’t it strange that the Service struggles to obtain an efficient performance from you on any number of engagements, but that a straightforward revenge mission sees you in and out in nineteen hours?” 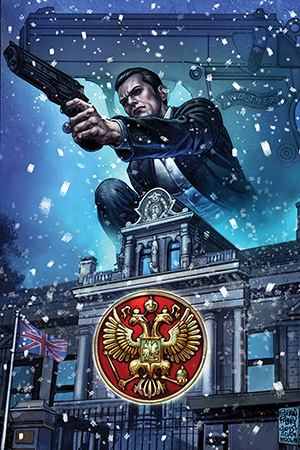 Quartermaster and weapons supplier Q is portrayed here as an elderly gentlemen (like actor John Cleese) but rather stoic and critical as opposed to the way that Cleese portrayed him.

Bond ha
s to accept some new guidelines and begin his travels through Great Britain en route to Berlin without carrying a weapon until after he arrives.  Q gets in some smarmy comments about Bond’s choice of gun and holster.  The first issue ends with a brief introduction to the newest Bond thug/combatant who will be waiting for him in Berlin.

A nice beginning. I will be following this title to see how things develop.  Cheers!