Scuttlebutt: news from around the comics globe

If you want to get a sketch the details can be found on the above link. If you want the sketch done on one of the special blank (title logo only) boards, you need to place that order by Monday, July 6.

The annual mega-convention, now in its 46th year, will remain in San Diego at least until 2018.  Website Deadline reports that the City Mayor secured a two-year extension by announcing an expansion plan that includes special hotel rates.  The San Diego Comics Convention was being courted by both Los Angeles and Anaheim to move to those cities.  Per the web article (as well as content at Paste online magazine) more that 130,000 fans brought $135 in revenue to San Diego by attending the 2014 convention.   You can read Deadline’s full article here . . . . .

Diamond Comics Distributors, suppliers of print edition of weekly comics  and gifts to local comic book shops and bookstores across the nation, can be found at Booth #2401, where they will feature many SDCC exclusives, giveaways, creator signings, photos with Star Wars characters, a Retailer Appreciation Lunch and several Previews panels.

On Thursday July 9th, Diamond will host its own PREVIEWSworld Panel from 12:30-1:30pm PST in Room 8.  The panel will give a detailed look inside the pages of PREVIEWS, information on how PREVIEWSworld.com interacts with the catalog, a look at the new “How To Order” comic, followed by an interactive Q&A session.  The panel will be led by PREVIEWS Editor Marty Grosser, PREVIEWSworld.com Editor Vince Brusio and Diamond Consumer Marketing Manager Andy Mueller.  Panel attendees will get a free copy of the July issue of PREVIEWS and have a chance to win many other great prizes.

For more information about Diamond’s SDCC Exclusives and where to find them, in addition to learning more about Diamond’s Comic-Con activities, visit www.previewsworld.com.

July 2, 2015, Mt. Laurel, NJ: Dynamite Entertainment is proud to announce the full creative team for  Aliens / Vampirella, the upcoming horror crossover between their classic comic book heroine and the Xenomorph monsters from Dark Horse Comics' long-running comic book, based on the renowned film series.  Corinna Bechko ( Star Wars: Legacy) will steer the series with her scripts, while artist Javier García-Miranda will provide the atmophere and action. Also, artist Gabriel Hardman will provi 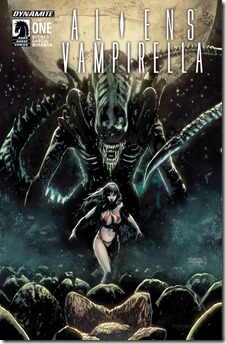 de the distinctive covers worthy of the tradition of horror excellence that both long-standing terror icons represent.

As established in Aliens / Vampirella #1, humans have begun to colonize Mars, but something ancient and sinister got there first. Vampirella, a supernatural exterminator, is faced with a mystery only she can solve... and the bloody realization that some monsters should never be awakened.
Aliens / Vampirella #1 will be solicited in Diamond Comic Distributors' July  Previews catalog.  Aliens / Vampirella will also be available for individual customer purchase through digital platforms courtesy of Comixology, Dynamite Digital, iVerse, and Dark Horse Digital.

Valiant Entertainment is proud to announce it is working with Swyft Media, the company driving the emojification of brand marketing, to bring Valiant's best-selling comic book icons directly to fans' mobile devices around the world with the Valiant Heroes Emoji – the first in a new line of digital sticker packs featuring emoji-style renditions of X-O Manowar, Bloodshot, Ninjak, Faith, and more of Valiant's greatest superheroes. 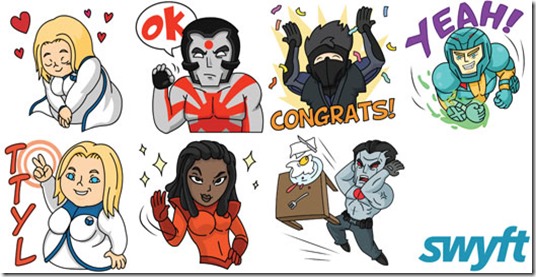 Available now in the iOS App and Google Play stores, fans can add a nanite-enhanced new element to their mobile messages by expressing themselves with the heroes of the Valiant Universe! Straight from the pages of Valiant’s award-winning comics and graphic novels, grab exclusive digital sticker packs to text friends and family with all-new, never-before-seen Valiant emojis – including Apologetic Ninjak, Frustrated Bloodshot, Exclamation Archer, and more than 20 other designs for  $1.99.

Fully compatible with Facebook Messenger, WeChat, Viber, LINE, Skype, WhatsApp, and more, as well as standard texting and SMS, send these stickers through your favorite mobile texting platform to let all of your friends, family, and loved ones just how Valiant you are feeling!  Standard text and data rates may apply.