By pghhead - July 08, 2015
SHEENA MOVES TO DYNAMITE: Dynamite Entertainment has completed an agreement with the current rights holders to publish original comic book and graphic novels for SHEENA, QUEEN OF THE JUNGLE.  The agreement also includes reprints of Sheena’s classic jungle fantasy material.  Her first new adventure at Dynamite will tea

SHEENA, QUEEN OF THE JUNGLE is the 1937 creation of Will Eisner and S. M. Iger. She was the first female comic book character to carry a dedicated series, preceding WONDER WOMAN #1 by four years. The original series spanned 167 issues and twenty years. 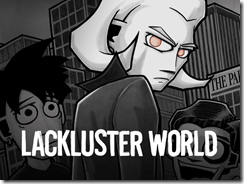 LACKLUSTER WORLD UPDATE:  We previously reported on the Kickstarter campaign to fund creator/writer/artist Eric Adams’ anthology.  The campaign has concluded, reaching the goal and earning $10,657 to fund the publication. Things are behind schedule for the original planned timeline, with books shipping in August.  October is the new goal, and surveys should be going out to backers next week.  Adams will be at San Diego Comic Con this week in the IP Pavillion at Booth #2203., showcasing some Lackluster World single issues and merchandise.

IS DEATH EVER PERMANENT IN THE WORLD OF COMICS?  Here’s your opportunity to see how things get handled in the Valiant universe with the debut next week of THE BOOK OF DEATH #1 of 4.  I have higher expectations based on how well Valiant has handled some mega-events and cross-overs so far.  They take it more seriously than some other comics companies. 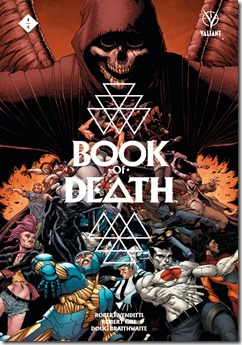 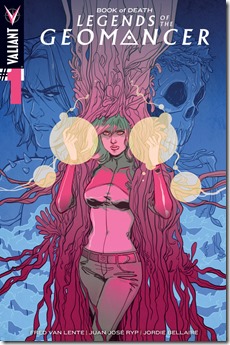 “A coward dies a thousand times before his death, but the valiant taste of death but once.”The Valiant heroes. X-O Manowar. Bloodshot. Ninjak. The Harbinger Renegades. Unity. This is how they lived. This is how they died.

“Now we know. The Book of the Geomancer has recorded it all. But only a young girl – the last in a line of the enigmatic mystics who protect the Earth known as Geomancers – has seen this future come to pass, from the coming cataclysm to the dawn of the 41st century. Alone with her sworn protector, the Eternal Warrior – a soldier battle-forged across five thousand years of combat – the duo must defy their allies to stop the Dark Age that now threatens to eclipse our world.”

OK, then.  We’ll soon see (July 15th release date) how things play out. With writers Robert Venditti and Robert Gill plus artist Doug Braithwaite it should be a great read for sure.

If you’re going to follow this limited series, don’t overlook the BOOK OF DEATH: LEGENDS OF THE GEOMANCER #1 of 4 by writer Fred Van Lente and artist Juan Jose Ryp.  This series reveals the history of the Geomancers, and won’t be collected in the eventual trade paperback.

DEVILS DUE TO UNVEIL SPECIAL PROJECT AT SAN DIEGO:  At San Diego Comic Con tonight it is preview night all over as well as at Booth #2001 where DEVILS DUE 1FIRST COMICS (partnership between old and new?) will be unveiled.  It also marks the penultimate deadline for another worthy Kickstarter program - - just seven days left to contribute to SCORCHED, artist/writer Ashley’s Witter’s creative project.