PORTLAND, OR February 18, 2015 – Oni Press, Portland’s premier independent comic book publisher, announced today it is collaborating with Jhonen Vasquez and Nickelodeon in producing an ongoing comic book series based on the beloved animated show Invader Zim.  The series will explore a new chapter in Zim’s Earth invasion and the adventures of GIR, Dib and Gaz.  The first comic will release on July 1st, 2015. 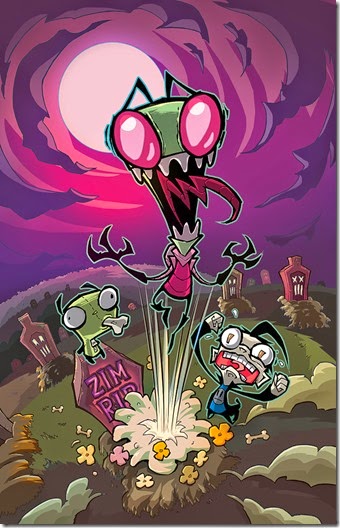 "All of us at Oni Press are elated to be bringing the first new Invader Zim stories in years to a rabid fanbase," explained Oni Press Editor in Chief, James Lucas Jones. "Getting to tell those tales with folks from the show like Jhonen, Aaron Alexovich, Eric Trueheart, and Rikki Simons just makes it all the more sweet."

Zim, the diminutive, naïve Irken soldier, is assigned to invade Earth to keep him from disrupting his leaders’ plans to expand their empire.  Arriving on the unsuspecting planet, he tries to blend in by disguising himself and his malfunctioning robot sidekick GIR as a human boy and his dog.  Zim is constantly hounded by his nemesis Dib, who recognizes his alien nature, and Dib’s younger sister Gaz.

“I’m always confused when people say how much they miss Invader Zim because the show never stopped running in my head, and then I remember everyone else isn’t in my head," said show creator Jhonen Vasquez.  "I try to imagine the world for all those people who don’t know what Zim’s been up to since the show went off the air and it makes me shudder.  How can people live that way?  Hopefully this comic helps make the world a better place.”

In 2001 animation fans were introduced to Zim, his oft-foiled plots to enslave the Earth and Jhonen Vasquez’s dark, funny universe on Nickelodeon.  The show and Vasquez’s iconic characters went on to become cult classics with a following to this day. Fans have been waiting for the return of Zim and GIR; now they’ll get it in the first all-Zim comic book, part of Nickelodeon’s commitment to bring its beloved classic characters to new audiences.

About Oni Press
Oni Press has been revolutionizing comics since 1997. Home to a range of rad comics including Scott Pilgrim, The Sixth Gun, Letter 44, Stumptown, Princess Ugg and The Bunker, Oni Press strives to create comics for you.
About Nickelodeon
Nickelodeon, now in its 35th year, is the number-one entertainment brand for kids. .It has built a diverse, global business by putting kids first in everything it does. .The company includes television programming and production in the United States and around the world, plus consumer products, online, recreation, books and feature films. .Nickelodeon’s U.S. television network is seen in more than 100 million households and has been the number-one-rated basic cable network for 20 consecutive years. .For more information or artwork, visit http://www.nickpress.com. Nickelodeon and all related titles, characters and logos are trademarks of Viacom Inc. (NASDAQ: VIA, VIA.B).