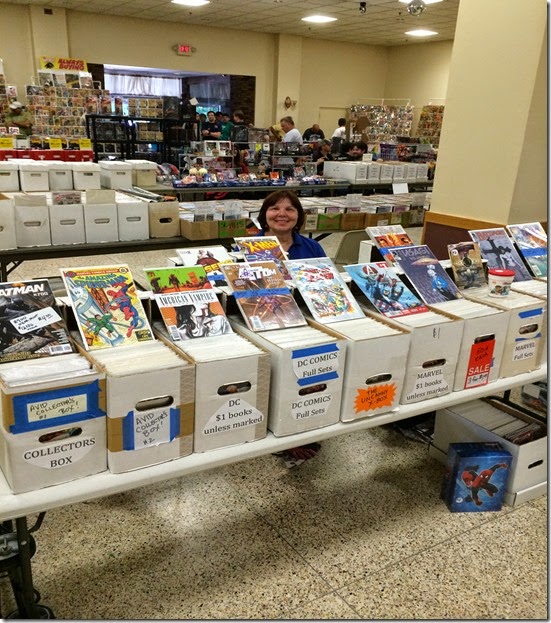 Comic Conventions are a great place to meet artists, writers and comics creators and publishers, find that book you need to complete a set in your collection, enjoy the variety of costumed participants, and talk shop with local comics-minded enthusiasts.  And, if the price to rent some table space at the Con is not too outrageous (it wasn’t) - - it’s a good place to display and sell comics.  However, you should not try to do both.  You will find that you need to stay glued to your vendor space no matter how much the traffic slows down.  Walk away to meet some of the famous guests and you could miss that one big chance to sell a stack of books.

Of course, if you are a full-time vendor making a living/business out of this hobby then you just might have enough staff to cover your selling area so that you can walk around and enjoy yourself.   I did have help from an attractive and friendly assistant (see photo above) but I just couldn’t walk away for more than a few minutes without feeling either guilty or that I just missed my big sales opportunity.  If you didn’t try to engage the passer-by in comics-related conversation and/or find out something about their interests, you probably weren’t going to sell them anything.

So, after surrounding myself with a plethora of objects related to my hobby and all within reach, I basically tortured myself for an afternoon.  (Similar to placing a juicy, meaty bone just three feet beyond the reach of the dog run.)  Across the aisle were some very respected creators - - - David Michelinie, Tom Smith, Greg LaRoque and Neil Vokes.  On the same side of the aisle just eight feet away from my space were The Living Corpse Crew  (Buz, Ken & Blair).  Somewhere else within the fire hall were the folks from PLB Comics and Underground Comixx and I never even got a glimpse of them.   Almost every single member of the 501st  (Star Wars cosplayers) were present, even featured in their own room. Yet I never got a picture or a chance to see them all together (it requires widescreen Cinemascope, mind you). We were lucky enough to see some of the other cosplayers entered into the competition (including one of the big winners) as they walked down the aisle past our section.

Is there a happy ending to this story?  I’d like to say that my dedication to my little section of the Fire Hall resulted in a ton of book sales - -  but I’d be lying to you. In spite of having some of the better conditioned and protected books at bargain prices and a warm, inviting market space  (see photo above again) we had plenty of potential customers but no big orders.  My biggest sale was the Spider-Man wedding issue, which absolutely thrilled the buyer when he could turn around and get it signed by author David Michelinie. I was glad to oblige and it was the high point of my day.

Other lessons learned:  successful comic conventions bring out the big players in the comics selling business.  They come from several neighboring states and pull up in big rented trucks loaded with merchandise to sell.  They have signs, banners, and elaborate stand-up racks to display their hottest books and goods.  They have the ability to rent 3X as much space as the little private collectors like me who just want to get something for their excess or surplus so they can keep buying new books (comics has become an expensive hobby in the 21st century!)  I can’t draw the crowds to my area the way that they can.  My advice to anyone thinking about selling their comics part-time fashion like I - - - a comic convention is going to frustrate you.  Stick to the flea-market type of events.

The biggest lesson for me: Go to a comics convention for entertainment purposes. The next time you see me at First State Comic Con (I heard a rumor about October 2014!) I will be in the crowd rubbing elbows with like-minded enthusiasts.

Below Photo - -  My neighbor vendor Mike (that’s all I remember) had a giant stand-up rack (must have been 7-8 feet to the top) that was dedicated to key issues  (all Near Mint) of Deadpool comics.  You think I had a chance of getting the guy in the photo to check out my stuff?  Nah, not even after I took a photo and promised to send it to him . . . . 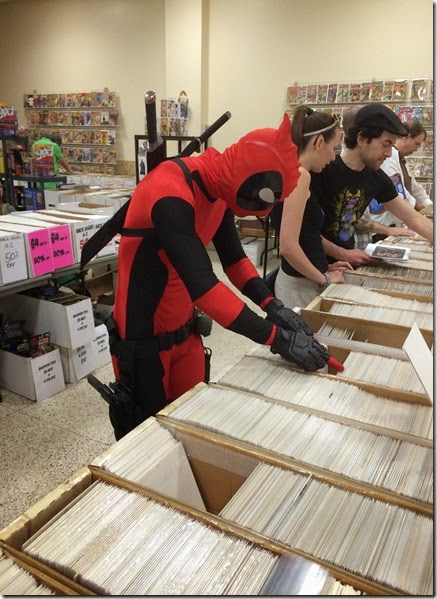