I simply didn’t get to read enough in 2012 to come up with a longer list of picks as in previous years.  However, I will be spotlighting some of last year’s works that I feel are deserving of another look and/or more recognition, such as . . . . . . . . . 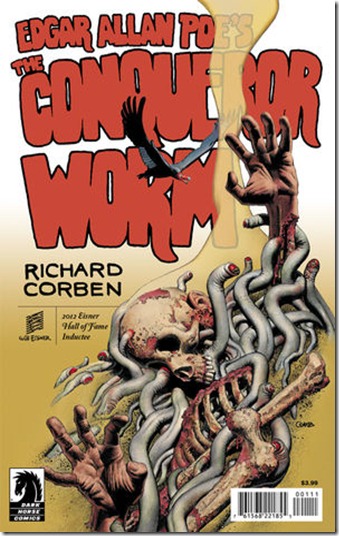 In my opinion, this is the BEST STAND-ALONE, SINGLE ISSUE STORY  of 2012. (At least, among all the books that I read last year).

Corben takes Poe’s classic poem and moves forward from there, elaborating, enhancing and adding to the imagery from this morbid reminder of the inevitability of death.   Corben sets his adaptation in the 19th century American West and adds a background story of arrogance, greed, betrayal, murder and deception that weaves its way throughout the template that Poe laid down.  Any fan of Poe or classic horror need to pick up this book.

A longer, detailed review was originally posted on the NAMELESS MAGAZINE website, and can be read by clicking the attached link . . . . . . . . . .