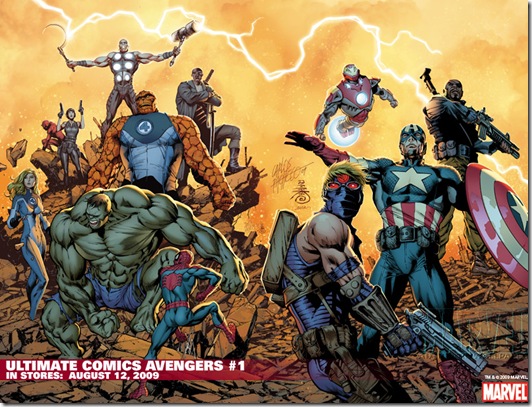 I liked this enough to want to come back for more. I found it very entertaining and cinematic in the way that Millar wrote and paced it and Pacheco illustrated it, reminding me of a good John Woo movie (or take your pick of action film directors).  The centerpiece of the book is an awesomely portrayed skirmish in the air that takes place inside and out of two helicopters - - and possibly the best action panels that I’m going to see, at least for this month.

I’ll summarize what occurs here without spoiling anything for you:

Issue #1 focuses mainly on the characters as shown on the front side of the wraparound cover; and if the future team will include all the others depicted here then things should get very interesting.  Nick Fury as envisioned by Carlos Pacheco couldn’t possibly look any closer to Samuel L. Jackson than he does here.  It’s three months after the events of Ultimatum and Fury has been disciplined for his actions and replaced by Carol Danvers as head of S.H.I.E.L.D.  Hawkeye informs him that Captain America has gone rogue and Nick’s wanted to lead a team to bring him in.

Judging by appearances, it looks more to me like Hawkeye has gone rogue. This masked mercenary bears little resemblance to the avenging archer except for the tufts of blond hair sticking out of his top-less mask.  In place of a quiver, he’s wearing two mini-backpacks, one over each shoulder - - and I don’t think they contain arrows, probably two very big guns instead.  I wasn’t really crazy about the Ultimates II version of Hawkeye but I warmed up to the leather uniform and learned to tolerate it (but not so much the way his character was depicted).   Here, Clint looks like an amalgam  of Image’s Grifter and DC’s Deadshot.  At least, so far he seems to be likeable and not an arrogant hot-shot.  What I do appreciate though, is the way Millar has him spring into action with both great courage and daring, especially when his pal Cap needs assistance.

I don’t want to spoil it for you and reveal why Cap has gone rouge, but he learns something that disturbs him and we learn it as well during the flashback sequence that details the in-air fighting.  I just love Cap’s entrance into battle - - you have to see this.  Meanwhile, we never see Tony Stark in armor this issue as he is missing when needed and looks to be chasing that “demon in the bottle” again and avoiding his responsibilities at the most inopportune times.

I think this will be a great action title and lots of fun to read.  I’m not expecting anything “break-through” here, just that Millar will write an engaging and entertaining tale.  I really loved  Ultimates I, liked Ultimate II a little less, and actually avoided Ultimates III on the advice of friends who found it very disappointing.  I’ll be hanging around here for the next several issues; and I expect to be happy. 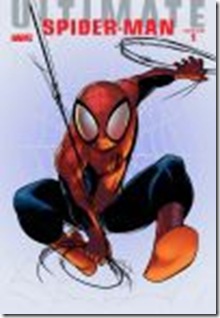 Despite how good this title has been in the past - - and it’s been very very good at times - - I think ULTIMATE SPIDER-MAN Version #1 and also this new ULTIMATE SPIDER-MAN  COMICS are very significant in the Marvel library for another reason  - = both titles represent the best chance (in my opinion, of course) to bring in new readers to Marvel.  And I don’t mean that aging/graying base of long-term comics aficionados (like me)  - - I mean brand-new, younger readers who don’t usually consider comics as an outlet for their entertainment money or time.   Bringing in brand new readers was one of the reasons for Marvel’s creation of the first  Ultimate Universe.   Since the regular Spider-Man books had been around for decades a new reader could get lost in the complex continuity just trying to follow along, resulting in discouragement and then quitting on  the books.  The original ULTIMATE SPIDER-MAN offered a starting point, a chance to get in on the story from day one as it began all over again with the accident that gave Peter Parker his spider-powers.  And it changed some of the characters and villains and gave them new life and personality.  More significantly, writer Brian Michael Bendis really got his hands around what it meant to be a teenager going through these changes, and really captured that sense of youthful discovery as well as a clear understanding and depiction of teenage angst, values, philosophies and concerns.

Right there on the cover, ULTIMATE SPIDER-MAN COMICS promises all of this with it’s hyper-active teen heroes racing to the foreground, most of them wide-eyed and smiling invitingly. The newly-updated, modern-attired and hair-styled Aunt May looks on not with the familiar kind old grandmother look but more that of a mature, observant and counseling senior citizen.  The insides of the book deliver on the promise.   The rather funny opening sequence shows Peter at work as a fast-food counterperson trying to guide a senile and impatient elderly woman through placing an order, only to get called on the carpet by the store manager for poor customer relations. This seems to set the tone for the entire book - -  ULTIMATE SPIDER-MAN will not just be about a young man coming to terms with the great power bestowed on him, and how the world/media doesn’t understand and misinterprets the way he handles the responsibility.  It’s also about the coming-of-age of a sixteen-year-old male as he grows and learns and struggles with the stress of balancing school, a part-time job and young romance.

It’s almost as if the events of ULTIMATUM never effected the world of the Ultimate Spider-Man.  At the conclusion of that universe-shattering mini-series Peter Parker/Spider-Man was missing in action, presumed to be dead.  Here he is, six months later and the only mention of those prior events occurs on the contents page and is handled in a few paragraphs.  On the following pages, we learn that New York City has been restored and everything seems the same.

But writer Bendis keeps our attention diverted from those events and keeps the story moving along, flitting back and forth between Spider-Man events and Peter Parker events and laying the groundwork for the stories to come.  Artist David Lafuente does a competent job here on the art, very fluid but nothing fancy or flashy.  (Although I think it would be very difficult to top or copy the original illustrator’s lengthy initial run on this book - - so don’t try, just take it in a little different direction.)  It’s that appealing kind of art that grows on you.  And Justin Ponsor does a real fine job on the colors, keeping it bold and attractive. I really like the way he shaded the moonlit encounter between Peter and Gwen.

We’re introduced to a new hero (maybe) who breaks up a min-mart robbery, a red-cloaked mysterious figure who may be the Ultimate version of The Hood or perhaps Cloak.  He didn’t show any big guns, just using his bullet-proof outfit and muscles to put the thugs down before disappearing into the night.  Peter seems to have a nice love triangle going on between Gwen, Mary Jane, and Kitty (which ought to make Archie Andrews jealous).  An exhausted and collapsing Johnny Storm needs to crash at Peter’s home.  And the story concludes with a villain taking out the Kingpin.  Not sure who he is, but he looks like a cross between one  of The Enforcers (have to go back to the Ditko days of Spider-Man to recall that one) and the glowing head Mysterio. Except there were blue bolts that shot from his hands to hurl Kingpin out the window, which makes me think he might be the Ultimate Electro.  Have to wait to find out.

It’s nice to re-visit this book after a long absence.  I used to share reading the first volumes of  ULTIMATE SPIDER-MAN with my then middle school aged son.  In fact, it was the first comic that I started to collect in trade paperback instead of the monthly issues.  As my son moved into high school he grew tired of the book; and I was also getting a little annoyed by the heavy doses of angst as measured out by Bendis - - so we stopped sometime after TPB #10.   So, in spite of my praise for this title I have the feeling I won’t be hanging around very long with this re-boot.  I’ve already ordered the first run of issues, so we’ll see.