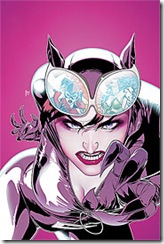 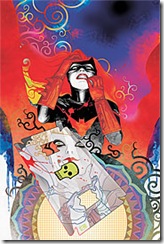 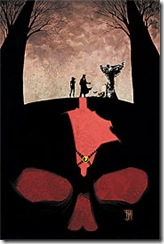 It’s an uneasy alliance between these three Sirens that will most likely be tested on a regular basis, maybe every issue.  Poison Ivy uses her powers on Catwoman to force the identity of Batman from her. Under the influence of the truth toxin secreted by Ivy’s lie-detector vines Catwoman tells the truth but still protects Bruce Wayne’s secret through a clever parlor trick taught her by Talia.  It seems a little contrived but perhaps writer Paul Dini is using this to get his point across that nobody is completely trusting here and this isn’t going to read like a standard “buddy book”.  I’m just wondering how far you can go with this concept.  So far, the book’s provided some light-hearted entertainment.  The Sirens seem willing to help each other out of trouble, and now its Ivy and Selina working together to rescue an apparently abducted Harley Quinn as the issue ends.  My opinion: this is still worthwhile.

Without a doubt, this is the bat-book that everyone needs to check out.  If you are not enthralled with the gorgeous art of J H Williams III then you will be dazzled by the psychedelic colors of Dave Stewart this issue.  It’s just wonderful to behold.  Bad  girl Alice shows just how bad she can be (razor blade concealed in the mouth) and she is proving to be one of the wildest new villains in the Bat-books.  We get a very brief glimpse of Batwoman’s childhood trauma here during a moment in which she is trying to recover from some of Alice’s poison.  Rucka has always been good at depicting tough girls and he excels here, including the back-up Question feature. Two good storylines here and even more deserving of your attention if you have to chose between this and Sirens.

Tim’s quest to prove Batman/Bruce is still alive takes him to Germany, where he breaks into a museum to pick up some undisclosed evidence. He’s communicating with Ra’s al Ghul on a regular basis now but hasn’t fully accepted his offer = to make Ra’s network available to Tim in exchange for sharing the findings on Batman.  Tim triggers an alarm and Ra’s trio of assassins from Issue #2 bail him out of a jam although Tim has to take steps to curb their murderous nature.  The superhero  who arrives on the scene with the police is The Wild Huntsman, a little too cornball and this slightly breaks the tone of the book.  The rest of this issue reveals more of the back-story and decisions/events that led Tim to where he is today.  Not a bad issue, but events moved a bit slower here with just one issue left before the first story arc concludes.  Still good, and I’m going to get the next issue.  The best of the bunch this month is:  DETECTIVE #855, hands down.

My budget doesn’t permit me to collect Absolute Editions.  When I saw this available through the local public library I couldn’t resist and checked it out immediately.  Wow is all I can say.  And Hush is one of the best stories to put in this hardcover over-sized edition - -those art panels by Jim Lee just scream into action when they are almost twice the normal size.  I won’t get into a summary of the story as I’m sure you’re all familiar with it.  It’s great to see it complete in an edition like this.  The extra features are a nice touch.  I’m glad I got to read this story again, just as “Hush” is becoming a major player (and problem) in the current Bat books.