Let’s Go Back To The Start

What better way to top off a year-long celebration of 70 years of Marvel Comics than with a limited series that details the beginning of it all?

What better writer to handle with care the 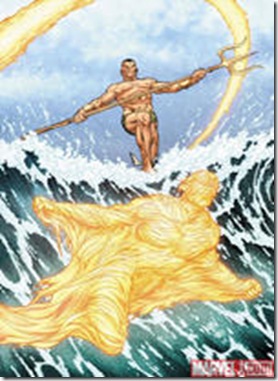 heady task of plotting this event and

properly than Ed Brubaker? What better

artist to trust with maintaining accurate

historical detail while creating some exciting visuals than Steve Epting? They are probably the best writer-artist combination available today, with their long-term work on CAPTAIN AMERICA serving as evidence of how their teamwork makes both story and art even better.

The advance information on THE MARVELS PROJECT promises an eight issue limited series that will explain the start of the Marvel Universe and reveal the hidden connection between the heroes. It will feature some well-known characters (Human Torch, Sub-Mariner, Captain America) as well as some lesser-known and lesser-used secondary characters from Marvel’s early days (The Angel, for one) that should grant Brubaker some artistic license to develop them even further. In issue #1, he shines a light on Dr. Thomas Halloway, the narrator of this issue (and I suspect, perhaps the narrator of the entire series).

Dr. Halloway is a caring practioner, giving of his personal time to see after the care of his patients. He’s an extremely likeable character, and we see the events of the beginning of the Marvel Universe unfold as he sees them, from his point of view, as his narration guides us through the book and the captions read like his own personal journal entries. As he reacts to what he sees and learns, Halloway starts to put his concerns into actions and take on even more responsibility for protecting the public from the havoc to come (and I suspect he will do this in later issues as The Angel). 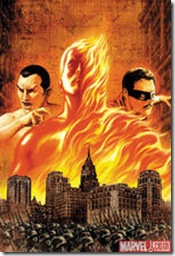 Rather than wait for all this to play out and then purchase the trade paperback so I can read it all at one time, I’ve decided I want to follow this book from month to month. While I don’t think it’s going to capture everybody’s interest and create the same kind of “buzz” and excitement that SECRET INVASION did I do think it’s going to be one of the most talked about books this year. If there’s an online chat or just discussion among friends about THE MARVELS PROJECT, then I need to stay current with this series if I want to participate. While I’ve been trying to reduce my monthly pull list and concentrate on mostly trade editions - - there are still some series that you can’t contain your anticipation that long. Ed Brubaker seems to be one of those “can’t wait” writers (although I do hold out on CRIMINAL until the trade comes out, and I’ve been stockpiling his DAREDEVIL trades. Maybe it’s because those two titles don’t generate enough “buzz” for me to always be wondering what I’m missing by waiting.)

In Issue #1 of THE MARVELS PROJECT, Brubaker starts laying out the groundwork and building on his foundation. It may turn out that the unifying theme that connects to all these heroes is World War II, especially what looks like a pre-war technological race between the United States and Germany to be the first to develop a super-human. This leads U.S. forces to recruit some special agents (Nick Fury for one, in his pre-Howling Commando days) to extricate a defecting German scientist who wants to help the U.S. in their efforts (could this be the same scientist who helped develop the super-soldier a.ka. Captain America?). 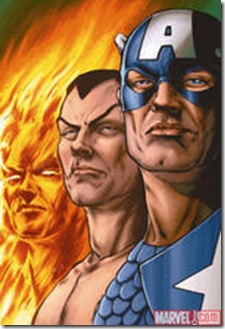 We also learn that Prince Namor’s long time distrust (and even hatred) of “surface-dwellers” may stem from Nazi Germany’s exploitation of his race in their super-human experimentation. And the android Human Torch’s accidental discharges bringing flames and destruction to the city may be the beginning of it all as prophesized by a seemingly demented elderly man on his deathbed - - the same man who related stories of gods and monsters and heroes to Dr. Holloway in the opening prelude of this book. (Don’t overlook the possibility of time travel that he alludes to, either.) No, I didn’t spoil it for you because there is a lot more to be intrigued by here. I’ve read this issue three times now and still enjoy the experience.

One last item to make this worth your time is the carefully detailed artwork of Steve Epting - - - all the action takes place in 1938 - - and he is authentic in his illustrations of this period = from cars, buildings, clothing, items of furnishing down to the street scenes. You won’t be disappointed.