Batman: Battle for the Cowl: The Underground 1: This is a good story starring the major Gotham villains (Penguin, Riddler, Two-Face, Firefly, Poison Ivy, – but not the Joker) reacting to the new Black Mask and his plans. It’s especially good at following up the ending to Catwoman’s previous series with her despairing over Black Mask and Batman, both of whom she thought dead and who have worse replacements running around. It ends on a cliffhanger (sort of), so this might be a good “wait for the collection” candidate if DC bundles it with the main miniseries. (Which is only 3 issues, so it seems like they’ll need more to fill up the book.)

Nova 24: Speaking of Legionnaires, it’s the Imperial Guard! :-) More dangerous here than we’re used to seeing them, definitely fully on board with Emperor Vulcan’s plans. There’s also more good stuff about the Nova Corps and how they’re faring without Rich Rider to lead them, and it’s not so tied into “War of Kings” that you can’t enjoy it even if this is the only book you’re into. Good, solid, superhero stuff with a surprise ending in every issue.

Dark Avengers 4: I tend to talk more about writing than art, so let me focus on Mike Deodato here – I haven’t always been a fan of his, but the last two pages of this issue are drop-dead gorgeous and convey Bendis’ point better than he could have possibly done in dialogue. (The coloring is amazing too.) On the writing side, some nice Osborn/Doom scenes and Oborn’s team acually wins one for a change (although they needed Doom’s help to do it.) People who were annoyed at the way Bendis portrayed Doom in the first few issues of Mighty Avengers will like him a lot better here.

Justice Society of America 26: I’ll again make more of an art commentary: Geoff Johns’ final issue is a quiet story that gives Dale Eaglesham a chance to do page after page of the “slice of life” stuff he does so well. I mean, just look at it: 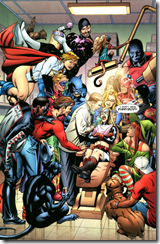 I’ll miss Eaglesham on the DC characters, but I think he’s perfect for Fantastic Four so I’m looking forward to that.

Wonder Woman 31: I’m honestly not sure how to write about this issue. It’s so good that I just don’t know where to start pointing out things that I liked. Just buy it, already. (Actually, this is part 6 so if you’re not reading it already wait for the “Rise of the Olympian” collection.)

Trinity 48: Enough gets moved forward here that I’m less worried about them being able to tie it all up before #52, and boy Mark Bagley’s artwork seems to still get better every issue.

Green Lantern 40: Continues to march towards “Blackest Night” with some interesting revelations about how the Orange (greed) power operates and the ongoing subplot about Hal trying to figure out what (if anything) he hopes for. On the art side, more of those amazing double-page spreads we’ve been accustomed to lately. Definitely a middle chapter – nothing really gets resolved -- but a good one.

Skaar 10: A nice father/son parallel here, where the people in Skaar’s life realize just how ruthless and dangerous he is and have to make a similar decision to the one Tony Stark et. al. made about sending the Hulk away. (Which ironically led to Skaar’s birth, etc.) Also nice to see Ron Lim drawing the Silver Surfer and Galactus again. Next stop: Earth!

Teen Titans 70: Not a complete mess, but close. I mean, this book should be somewhat about the team’s problems but that’s all this is about to the point of being tedious. (You know you’re in trouble when the Vigilante chapter of your crossover is the best one.) I did like the Ravager/Jericho scenes, though. Since this book is going through creative teams even before they actually create anything, it’s hard to tell if there’s a long term plan here. Maybe it will improve now that [formerly dead kid] and [formerly dead boy] are available again?

Superman 687: Someone doesn’t seem to have gotten the memo that Black Lightning is off the grid (see Outsiders), but other than that good stuff featuring the supporting cast. Mon-El is mostly the one featured, and I’m glad they’re dealing with the secret identity issues that I thought were an obvious problem last issue. There’s also another Legion connection here that may or may not end up tying in to Legion of Three Worlds.

Final Crisis: Legion of Three Worlds 4:  As with Shane’s comments, there be spoilers here so bail out now if you need to. Both Shane and I had emotional reactions to this, which I think is good – it shows that Johns and Perez are doing something right. I’m not going to rebut Shane point-by-point because I think his reaction is equally valid and I don’t want to belittle it by picking it apart. I think we’re just coming from different places, so I’ll try to describe where I’m at and maybe that’ll give you an idea of whether you’ll like this or not.

My childhood Superboy, Clark Kent as a boy, has been gone for a long time and isn’t coming back. I’m actually OK with that – I’m not one of those people who thinks comics have to stay the same as when I was a kid forever. (And I’m not suggesting Shane is like that; I’m talking about people my age.) I like the ‘90s Superboy and I read and enjoyed his series, especially the Kesel/Grummet stuff, for it’s whole run. I also think the current decade’s changes to the character – being accepted by Superman, getting a Kryptonian name, living with Ma & Pa Kent, joining the Titans, and sharing Luthor’s DNA – are good ones. I think that “clone of Superman and Lex Luthor” is a much better and easier to explain concept than “clone of Superman and some guy you’ve never heard of.”

I’ve been reading the Legion since the ‘70s, and as much as I do like the reboot and the stuff that followed, as well as Mark Waid’s recent revamp, I don’t think it ever quite worked without Superboy in it. This was partially solved recently by saying that Clark Kent visited them as a boy -- I like the modern idea that the Legion is responsible for teaching Superman as much as he’s responsible for inspiring them – but it’s not the same as having a Superboy and I am absolutely thrilled to have him back in that role. (And I think the method by which he was brought back was clever and logical.)

Yes, there's a lot of "Geoff Johns' greatest hits" and "Geoff Johns explains complicated stuff quickly so that you won't think about it too much" in there, but I had enough fun that I didn't care. I loved all the Bart and XS stuff, and the Brainiac 5 scenes, and even the Time Trapper revelation. (I’ll leave it to greater Legion fan minds than mine to figure out whether it’s plausible or not.) The only thing I’ll flat out disagree with Shane about is the art. I don’t think Perez is phoning it in and in fact I think it’s some of his best work. (I do, however, admit that I don’t know anatomy well enough to notice muscle rendering mistakes like the ones that bothered Shane.)