I’m going to make good on that previous threat and share my August Previews orders here. Just like Tom Petty sings “and I won’t back down.”  Maybe this may serve as a better jump-start for some back and forth discussion on this blog site.  This is an interactive column here  - - so if you’re reading any further be prepared for some questions along with my comments (and hopefully some will elicit responses).

Once you get beyond all the back-patting that Marvel engages in,  the Young Guns program is actually very helpful - - it focuses attention on newer artists who are expected to be future stars.  So I’m glad to see Marvel introduce The Write Stuff, a similar attempt to focus attention on promising writers.  While the initial group of four to be tagged with The Write Stuff have a decent portfolio of accomplishments already under their belt - - they can still be considered “new” to the Marvel Universe, so I’ll let that pass.  I’m pretty familiar with Jason Aaron and Andy Diggle and I agree that they are talented.  I’m still not sure about Jonathan Hickman and Rick Remender, although it may be that the books I read by them just didn’t impress me (Hickman’s first issue of Secret Warriors and the last four issues of The Atom by Remender).

REBORN: The blank page solicits are intriguing and create curiosity.  With Brubaker and Hitch on board it must be good, especially if it’s the rebirth of Captain America as rumored. I’m waiting for a trade edition on this one (as well as some feedback on the initial issues from some of our other correspondents)  - - I’m sure that will occur.

I won’t be ordering the single titles here because I’M ALSO WAITING FOR TRADE EDITIONS OF:  THE MARVELS PROJECT;  DARK TOWER: FALL OF GILEAD;  THE STAND: AMERICAN NIGHTMARES;  INVINCIBLE IRON MAN: WORLD’S MOST WANTED;  and NEW MUTANTS first story arc.  (And some more titles that I’ll mention below).

From this grouping, THE MARVELS PROJECT looks to be the most interesting, a retelling of the origin of the Marvel Universe by marvelous scripter Ed Brubaker with art by the magnificent Steve Epting.   I am especially intrigued by the cover image of the Hulk which resembles an 1890’s British pugilist. 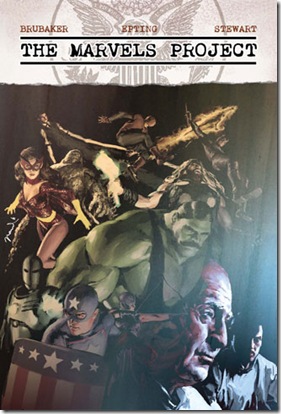 I see that two more Marvel Noir books premiere in August = Punisher Noir and Luke Cage Noir. Is anybody reading any of these titles?  Are they any good or is it just a gimmick?  Is there a good story behind the trappings and the novelty?  I’m afraid to explore here, but I might pick up a trade if I read a good review of one of these titles.

Let’s move on to some single titles that I’m actually going to order:  ULIMATE COMIC AVENGERS #1 (Mark Millar, Carlos Pacheco) and ULTIMATE COMICS SPIDER-MAN #1 (Brian Michael Bendis and David Lafuente). It’s been almost ten years since Marvel re-booted the universe and started over with Spider-Man, etc. in order to allow curious new readers to jump on board without having to understand the continuity/history of the character. 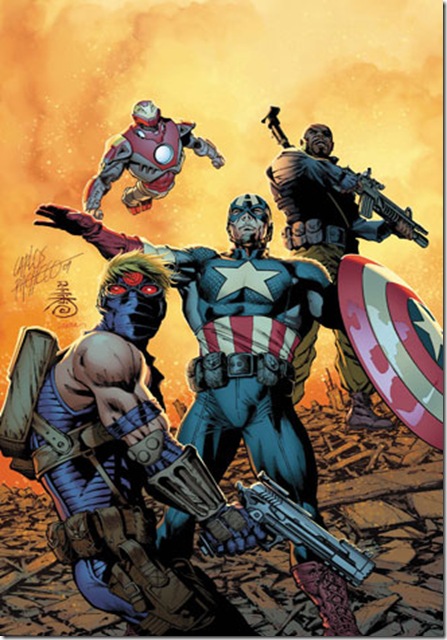 And, as I’ve commented on before, the Ultimate Universe has become just as complex and confusing as the standard Marvel Universe making it difficult for a newbie to come on board.  So, let’s kick it out and start over again for a new generation. (I really don’t say any other alternative, myself if this actually the intention = to get some new blood reading these books.)  So I’m in for the first issues and if I like them I’ll wait for the trade editions.  (Hey, is that Wildstorm’s Grifter who snuck his way onto the cover?)

DAREDEVIL #500:  My admiration for Ed Brubaker is so strong that I have been purchasing and stock-piling the trade editions of Daredevil since he took over the title.   Hey, these stories could be dullsville and I wouldn’t even know – that’s how much I trust the guy not to mess it up (and I’ve never read anything by him that wasn’t a first class effort.)  So sure, I’m picking up the last issue of his run on this series.  I’d say I’m really sorry to see him leave the title - - but I really don’t know because I haven’t read a word.  I will read this one though, I want to see where he is leaving things for the next writer to take over.  And I feel that he’s such a good writer that reading the ending first won’t spoil my enjoyment of his series run once I get around to actually picking it up.

And in contrast to writers with lengthy runs on series I see that yet another writer is taking over FANTASTIC FOUR-- Jonathan Hickman (The Write Stuff guy).  Is there an FF policy in place that says a scripter gets two story arcs and then change again?  I’m sort of glad I decided not to follow this series.  Hey, has anyone ordered the IMMORTAL WEAPONS 5-issue series?  (See page 53 of Marvel Previews) It looks interesting and it’s another one I might order in trade edition if I find a good review of it anywhere.

Another trade edition I’m ordering this month is THE MIGHTY AVENGERS: EARTH’S MIGHTIEST PREMIERE HC.  Thanks to Jeff for bringing me back to this title after Bendis left.  I forgot that Dan Slott, a writer that I admire (hey, why isn’t he in The Write Stuff?) was taking over the book.  I saw the announcement that the new story arc would involve Merlin and Morgana the Witch ( I just hate that hero/medieval blend) so I stayed away until I read Jeff’s review.  So I picked up two issues and loved what Slott is doing. In addition he’s brought the fun back to this book.  It’s an amusing read as well, with lots of inside jokes and funny innuendos and asides being uttered based on character’s back histories. I like it.

A MODELS, INC 4-issue limited series is announced. You are kidding, right?  Is it just me or does that cover look like a knock off of the first issue of GLAMOURPUSS?  Is anybody going to order this?  Is anybody reading GLAMOURPUSS? (although that title might actually have some merit, in a curious way. I liked the history of newspaper comic strip artists mixed in with the modeling story - - but not enough to bring me back for another issue).

MOON KNIGHT SAGA - - - I’m ordering because . . .  it’s free!  Why not get confused trying to follow yet another character as Marvel tries to make sense of the back history and put it into some kind of reasonable order. (Boy, was the Wolverine saga ever confusing - - it’s tied for first place with the War Of The Kings saga.)  And John Rhett Thomas seems to keep getting assigned to researching and writing these things  - - is that a Marvel punishment of some kind . . for what? . . . being Roy Thomas’ kid, maybe?

I’m ordering WOLVERINE WEAPON X #4 because I’m following this first story arc by Jason Aaron, but it’s not holding my attention nor exciting me as much as I had hoped for. (Thought he might breathe new life into the Wolvie franchise - - I had high hopes after reading his single issue story in Wolverine #56, a great one!)

It’s nice to see Marvel keeps giving work to Chris Claremont (he did popularize the X-Men way back when) even though he doesn’t seem to have any fresh ideas and is kind of mediocre/boring (least what I have seen). I’m a little concerned that this is titled XMEN FOREVER as a kind of tie-in to the great AVENGERS FOREVER - - let’s hope he doesn’t besmirch or tarnish the legend of that trophy. No, I’m not ordering this - - I’m too scared to find out if I’m right.

I’m not ordering PUNISHER: FRANK CASTLE MAX- SIX HOURS TO KILL TPB although that cover is really intriguing, plus it takes place in Philadelphia (my adopted home).  I don’t want to take a chance on a writer I’m not familiar with – Duane Swierczynski.  However, I will order PUNISHER: WAR ZONE TPB because of Garth Ennis and Steve Dillon - - can’t wait to see what fresh ideas they have brought to this formerly tired title.