Suburban Glamour, and my love for Jamie McKelvie

By Shane - May 13, 2009
I've been reading a bunch of independent stuff lately, because, well, after BC closed I decided to expand my horizons a bit, and had friends suggest stuff to me.  Some was good, some was bad, some was abominable and some was phenomenal.

Sometime soon, I'm going to tell you about a comic from that last category--it's a little thing called Phonogram, being published by Image Comics.  It's currently on its second miniseries, and it is basically just the absolute best thing being published by now, and if you aren't reading it you are missing out on something incredible.

Still, it's time for me to rave about one part of what makes Phonogram incredible--its artist and co-creator, Jamie McKelvie.  He's done work for Marvel and DC recently--he did a few issues of Cable, some stuff for the X-Men: Divided We Stand miniseries, and some stuff for the Gotham Gazette issues that tie into Battle for the Cowl.  And those were all great, but where he really stands out is with his creator-owned stuff, like Phonogram and...well, Suburban Glamour.

Suburban Glamour is a series about...okay, you're going to laugh, and I did when I first heard about it--a high school girl who discovers that her imaginary friends are real and also there are fairies.  Yes, it sounds completely ridiculous, but it's done with a sarcastic streak that provides a new view on the boring cliche.  The character work is perfect--almost immediately I fell for all of the main characters.

This is a series that Jamie McKelvie wrote, but as I mentioned before, he's an illustrator, and a very talented one at that.  Here's a page from Suburban Glamour that absolutely blew me away: 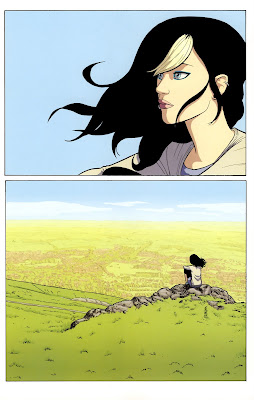 Unfortunately, Blogger is making it smaller than I wanted it, but even with that I think that you can see the level of talent that McKelvie has.  The book is absolutely beautiful.

Basically--pick up Suburban Glamour.  Pick up Phonogram.  Pick up anything that has Jamie McKelvie's name on it, because, to quote Warren Ellis, "Jamie's one of the major new talents of the decade".