By Shane - May 21, 2009
Time to get some blood back in this blog!  Let's take a look at some of what DC is offering in August.  It's a rather tempting month for me, with several launches that I'm really rather interested in. 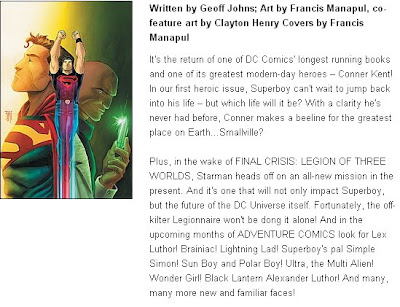 To start off, we have the launch (relaunch?) of Adventure Comics, starring Superboy.  We've already discussed this book, so I won't go into too much more, other than to note that Francis Manapul's art looks gorgeous (I have this as my desktop background right now), and that there will officially be a Legion backup (with art by Clayton Henry, who I'm not too familiar with, but a quick search looks promising).  It starts off with Starman for  few issues, but it's been confirmed that the backup will indeed be Legion-centric, with the option to launch another ongoing book if the demand is there.  I think that this title will be incredibly successful, and I've put aside most of my issues with it.  I'm looking forward to it. 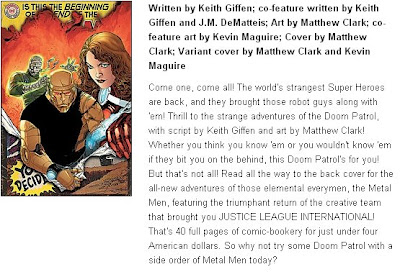 However much I look forward to Adventure Comics, though, it's not nearly as much as I'm looking forward to this.  Keith Giffen is a favorite writer of mine, one who almost always puts together a solid read, and this seems like the perfect fit for him--it's superhero-y, but it's just out there enough to give him a chance to go nuts.  And Matthew Clark, he's become one of my favorite artists recently.  He's extremely talented, with a distinct style.  The preview pages look incredible.  And the Metal Men co-feature, well, the credits of that creative team speak for themself.  This will be well-worth my $3.99, of this I have no doubt (although, okay, I'll probably be paying 2-something for it, but still.)

Another new series?  Yes!  The next ongoing title for the Bat-family stars Batgirl...and that's really all we know.  Is it Cassandra Cain?  Doubtful.  Is it Barbara Gordon?  I was all set to say "Probably", but with the way her Oracle miniseries ended, the odds don't look nearly as good.  Bette Kane?  Maybe, I guess, given that Kate Kane is Batwoman, but she hasn't even appeared in quite some time.  Misfit?  Wendy?  A completely new character?  It's a mystery, and Battle for the Cowl provided no clues.  As for the creative team, Lee Garbett is a solid artist (albeit not one I'm very familiar with), but Bryan Q. Miller is fairly new to the comics world.  I understand that he's done work on the Smallville television series, and he has some fill-in stories lined up with DC, but nothing too major, so putting him on a new series launch seems a bit surprising to me.  I'm still intrigued, however--not enough to buy it monthly, but I only buy three or four books from DC monthly anymore (and two of those are the ones listed above), and none from Marvel, so it's not as if this is a shock.  But I'm choosing to be optimistic, here. 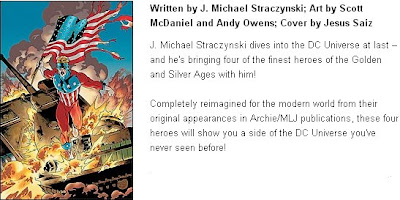 J. Michael Straczynsi is a name well-known around these parts, and his newest big project for DC, featuring a revival of the old Archie-superheroes (reclaiming their original name, "Red Circle"), has finally been solicited.  I was skeptical at first, but everything I see of this book excites me, from the JMS interviews to the J.G. Jones redesigns to the Jesus Saiz covers to the artistic team announcements (Tom Derenick paired with Bill Sienkiewicz?  Scott McDaniel and Andy Owens?  All good stuff).  It also appears as if two new titles will launch from this, each of them starring two of the characters (although I can't recall which ones in which book).  I'm not sure if JMS is attached to that, but I look forward to reading these titles in trade format.

It looks as if Blackest Night is shaping up to be DC's analog to Secret Invasion.  Say what you will about Final Crisis--and remember, I was absolutely in love with that book--but it didn't act as a company-wide event.  And, again, that wasn't necessarily the goal, but given that it was published at just about the same time as Secret Invasion, and, well, the customers spoke with their wallets.  Anyway, Blackest Night seems to be capturing the same excitement fans felt about Secret Invasion--except instead of "Who's a Skrull?", it becomes "Who will rise from the dead?"  Three tie-in minis begin publication this month, and unlike last month (which completed a three-issue Green Lantern miniseries), these books are published monthly.  The creative teams are good enough, and none of the books look like they'll feel pointless (whereas I was less-than-thrilled with some of the Secret Invasion tie-ins).  Blackest Night looks like it will be a very successful event for DC, especially after they released a prologue for Free Comic Book Day. 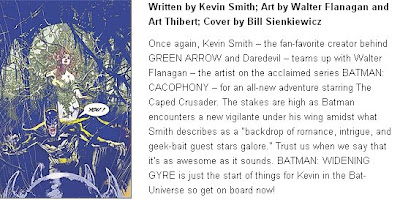 I haven't paid much attention towards Kevin Smith's foray into the Batman universe, but I've heard mixed reviews.  Still, I'm intrigued by the idea that he seems to be developing a series of minis, so I'll keep an eye on this.

The Superman titles host two annuals this month, for both Superman and Action Comics.  Given that the tenth annual was never collected (despite featuring the "new" origin for Mon-El), I'm concerned as to whether I'll get a chance to see these or not.  The Superman titles also cross-over this month, although I'm not sure as to the details--it's clearly New Krypton-based, of course, but other than that I don't really know.  Something about Codename: Patriot?  Perhaps?  I really haven't paid these books too much attention lately, in an attempt to remain surprised for when the hardcovers come out.  Finally, James Robinson's next Jimmy Olsen Special comes out, which is just swell (also, despite my comment last month, the New Krypton hardcover did print the Jimmy Olsen and Guardian specials.  My bad!)

We finally see Showcase Presents: Warlord, going along nicely with the relaunch.  Has that been good?  I haven't heard much about it.  Having never gotten a chance to read about the Warlord (except as an occasional crossover appearance), I look forward to picking up this collection.

The Spirit ends publication with issue 32.  Really, though, after Darwyne Cooke and J. Bone left the title, it was just sort of treading water, right?  Fortunately, it looks as if DC is working to repackage the Spirit along with several similar characters, including Doc Savage and Blackhawk, for a new project.

Finally, new collections for both Icon (from Milestone) and Cosmic Oddysey.  Very glad to see these.

So, what are you all getting?