Here’s the summary of the remaining books I picked up during Free Comic Book Day 2009.

I’m going to write separately about The Stuff Of Legends FCBD issue and meeting the publisher and artist. 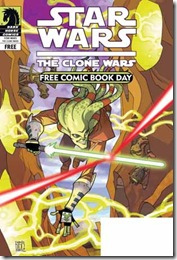 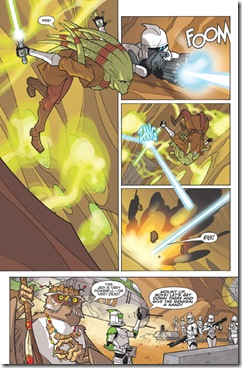 STAR WARS: THE CLONE WARS  (Dark Horse):  This is a flip book, with the main story focusing on Star Wars and the backside/flipside divided between Usagi Yojimbo, Emily The Strange, Beanworld and Indiana Jones stories, with everything aimed at the “all ages” audience.

At just eight pages the Clone Wars story focuses on a single battle and a unique attack strategy that works.   Jedi Master Fisto (obligatory bathrobe, and a “squid-locks” hairdo to help us remember him)  has to break up a force of separatists who have secured themselves within a mountain stronghold and a stockpile of valuable exonium “energy stones” that has a local owlish chieftain squawking with impatience at the Jedi/clone forces inability to defeat them.  Master Fisto (I’m getting a bad image here based on that name!) teams up with a sharpshooting clone solider to get inside and defeat the rebels.

If I was a younger reader I would probably find this rather exciting and seek out more Star Wars books.  I think I’m just burned out with “Star Wars” and don’t appreciate this. Ho hum.  When Dark Horse picked up the Star Wars licensing for comics they brought a lot of excitement to a stale mythos and breathed new life into the line.  I was reading them as well because I picked up a good share of these books for my enthusiastic sons back in the day.  What followed was such a glut of books and titles (who’s counting anymore?) that still continues today.

I do admire Stan Sakai’s longevity with his creator-owned rabbit samurai saga, Usagi Yojimbo. I just can’t get over the cartoonish aspects of this and take it seriously.  Still, it’s a great way to introduce a younger reader to Asian culture, philosophy and values.  “One Dark And Stormy Night” (must be tough coming up with original story titles) is a compact little ghost story that surprised me with its implied “racy” nature but should go down well with a young reader.

Emily The Strange is too strange for me and perhaps too hard to understand for the younger reader.  Maybe there are some 12-16 year olds out there that this strange quirky style is well-suited for. Can’t see this title gathering much of an audience/following.  Weird, yes . . but in a very boring way.

Larry Marder’s Beanworld is one of the oddest off-the-wall cartoon creations you may see, that looks to have some Krazy Kat influences.  This 2-page only preview shows how different it is but again I’m wondering who the best audience is. Like Emily The Strange it seems aimed at the very young but also would be a little hard to follow - - and I think the 12-16 year old group would be just flat out bored and annoyed by it.  I am grateful to Dark Horse for giving me a chance to sample it without spending any money on it.  A little taste like this is all I needed.

“Indiana Jones and the Temple Of Yearning” = It’s nice to see that Mark Evanier is still finding work in the industry, and writing comics stories for younger audiences seems to suit him. This is competent enough just not interesting enough for an adult to want to follow it. The art is simplistic as should be expected for this type of fare.

If I was looking at these titles and trying to decide which ones to buy to introduce to any of my younger relatives I suppose I would have to decide between Star Wars and Indiana Jones figuring that they would take to some familiar material more easily, and then give Usagi Yojimbo to the more open-minded youngsters.  Skip the rest. 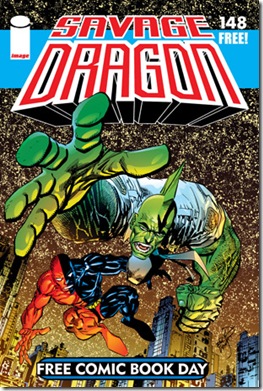 SAVAGE DRAGON #148 FCBD (Image):  Of all the Image titles that have been introduced since that company’s inception in the 1980’s I think just Savage Dragon and Spawn have been continuously published.  And for all it’s years every issue of Savage Dragon has been both written and drawn by Erik Larson, which is quite a commendable accomplishment.  However, if you’ve been following all that time then you realize the limitations of Erik Larson in both his writing and art styles. There is a group in the general readership that likes knowing what they are getting, avoids change and innovation, and doesn’t want to be surprised.  This is a perfect book for them.  I’ve read this title in the beginning, and picked up scattered titles here and there (usually in the bargain bins) over the years - - and never had any trouble following the events (in fact I often felt as if I had already read the story).

If you like Jack Kirby (I do) then you will appreciate Larson’s style, especially when you realize that he draws feet exactly the way Kirby did.  In the opening four pages of this story you get all the back story you need about where Savage Dragon has gone before. His children are kidnapped by a revived Vicious Circle and Larson resurrects a golden age hero now in the public domain (the original Daredevil from the 1940’s  as well as his sidekicks The Little Wise Guys) and copies the tone of those books (mindless action) rather than bring anything new to light.  It was “work” to get through this book. Save yourself some trouble and give it a pass.

Hard to believe 2009 marks the 25th anniversary of the creation of Teenage Mutant Ninja Turtles.  It’s another series that I’m aware of mainly because of my son’s interest in them during his formative years, a time that included my purchasing some of the black and white Mirage titles for him and then shifting focus to the Archie Comics versions which were more suited to his younger sensibilities at that time.   There is a nice write-up in here about how the two creators started out in business, and really just thought this might be a one story pony. (Who knew?)
This issue reprints that very first issue of TMNT and it’s not bad for what it is.  Creative for the time - - yes - - and would even be considered creative by today’s more evolved and enlightened standards.   This reprint issue is dedicated to Jack Kirby and Frank Miller, two recognized influences on Eastman and Laird.  And after reading this title, I see a lot of influence from Vaughan Bode and Richard Corben (and their early “underground” comics style) that should also have been recognized.   If you haven’t read this title before this is worth picking up, especially in the cool implied link to Marvel’s Daredevil in the origin of their powers.