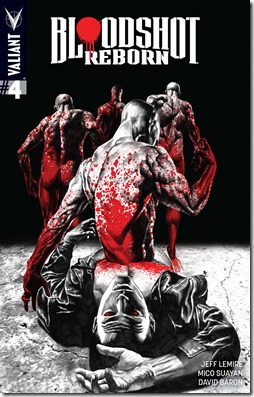 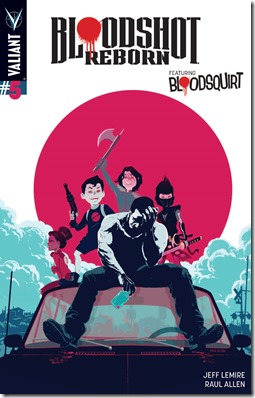 A BIG MONTH FOR BLOODSHOT at  VALIANT ENTERTANMEN 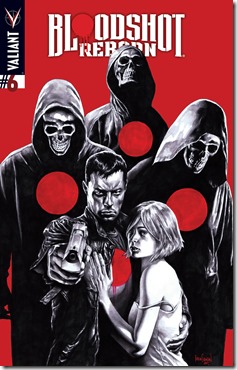 First, Jeff Lemire and Mico Suayan bring the synapse-shattering first act of Bloodshot’s return to a knockout conclusion in the BLOODSHOT REBORN #4 SECOND PRINTING. Bloodshot is hot on the trail of another mysterious mass-murderer – but with each nanite-infected killer Bloodshot confronts, he loses more of his humanity, but with killers wreaking havoc across Colorado, does he have a choice?

Then, breakout talent Raúl Allén joins Jeff Lemire for a special standalone tale of Bloodshot's psychotic cartoon sidekick, Bloodsquirt, in the BLOODSHOT REBORN #5 SECOND PRINTING. The memories of the thousands of people he killed as Bloodshot aren’t the only things that haunt Ray Garrison. For months now, the spe 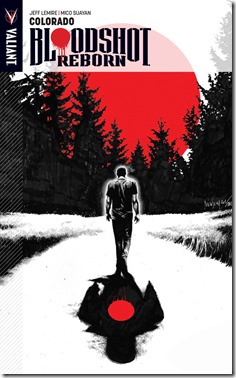 cter of the Geomancer and a nightmarish figment called Bloodsquirt have tormented him at every turn. First, on his television…and now in the real world…where Bloodsquirt acts out twisted fantasies that darkly mirror Bloodshot’s own violent past. Are these apparitions real or a just figment of Bloodshot’s broken psyche? And what could Bloodsquirt possibly be planning next?

Plus: on  September 9th, relive Ray Garrison's devastating return to the violent world he thought he'd left behind with the BLOODSHOT REBORN VOL. 1: COLORADO TPB – a $9.99 trade paperback collection

of the acclaimed first story arc from all-star creators Jeff Lemire, Mico Suayan, and Raul Allen.  Just in time for the beginning of " THE HUNT" in BLOODSHOT REBORN #6, jump on board here and find out why BLOODSHOT REBORN's black and brutal world has transfixed fans and critics.

BALTIMORE, MARYLAND - August 26, 2015  - Mark Wheatley and Marc Hempel, the creative pioneers who launched Blood of the Innocent, Mars, and numerous other creations, will explore things a little closer to home with their appearance at the Baltimore Comic-Con, September 25-27, 2015 at the Baltimore Convention Center.  This is the sixteenth annual Baltimore Comic-Con, and this marks Insight Studios Groups' sixteenth straight appearance at the show. They will be joined by studio mates Jerry Carr, G. D. Falksen, Allan Gross, and Evelyn Kriete.

Despite vibrant and incredibly varied solo careers, Mark Wheatley and Marc Hempel have been frequent, highly successful collaborators. Their work together has included Tarzan, Jonny Quest, Titanic Tales, and Doctor Cyborg, among other projects. They are presently at work on a fully restored and lavishly produced re-issue of their acclaimed graphic novel Breathtaker for Titan Comics. Long out of print, it was originally serialized and then collected into a best-selling trade paperback by DC Comics' Vertigo imprint 20 years ago. Their work, both together and separately, was extensively profiled in IS Art: The Art of Insight Studios.

"Even with the addition of some stellar media guests, the Baltimore Comic-Con remains one of the most staunchly comic-centric conventions on the circuit. Of course we're favorably predisposed to our hometown show, but it's so much more than just regional pride. The guest list just can't be beat by any other show of this size or even many that are quite a bit bigger," said Mark Wheatley. "We're extremely happy our big, annual gathering of the tribe happens right here in Baltimore, and we're looking forward to making some great announcements."

On his own, Mark Wheatley has most recently had his work for CBS Television featured on The Millers and Super Clyde, and he's presently part of a team that is developing a live stage show featuring Dick Tracy, Tarzan and the Green Hornet. In print, his work has been featured in the acclaimed Jungle Tales Of Tarzan from Dark Horse Comics, on the cover of the Meteor House release of Exiles Of Kho, the Phillip Jose Farmer series novel by Christopher Paul Carey, and his own well-received new art book, Stars, which presents elaborate line art portraits of actors, musicians, and authors. With a track record that includes Frankenstein Mobster, Radical Dreamer, Return of the Human, Hammer of the Gods, EZ Street, Skultar, and Lone Justice, Wheatley is an Inkpot, Mucker, Gem, Speakeasy, and Eisner award-winning creator. He has lectured at the Library of Congress, exhibited at the Norman Rockwell Museum, created set pieces for The Black Eyed Peas, designed for Lady Gaga, and contributed designs to ABC's Beauty and the Beast. He will be announcing an innovative new project at the show in collaboration with studio members G. D. Falksen and Evelyn Kriete.

"America's Most Beloved Semi-Obscure Cartoonist," writer-illustrator Marc Hempel, grew up in the northwest suburbs of Chicago and now resides in Baltimore, Maryland, where he plies his craft on such diverse projects ranging from his own Gregory, Tug & Buster, and Naked Brain to Disney Adventures, and from Clive Barker's Hellraiser to "The Kindly Ones" in Neil Gaiman's The Sandman. Hempel's art has also appeared in MAD, Marvel Fanfare, Epic Illustrated, Heavy Metal, Flinch, My Faith in Frankie, The Dreaming, Lucifer, Munden's Bar, Nickelodeon Magazine, and a 21-page Escapist story for Dark Horse Comics. His series The Love Brothers has appeared in Aces Weekly.

Cryptozoo Crew artist Jerry Carr will debut a select number of large and small stretched canvas prints, illustrating a variety of furkini-clad jungle heroines and the monkeys who love them. At the Baltimore Comic-Con, he will also unveil new, limited edition poster prints, depicting all kinds of alien, primate, and reptilian critters. His and Allan Gross' Cryptozoo Crew has been optioned by Alcon Entertainment.

G. D. Falksen is an author, lecturer, public speaker, and MC. He also studies history and has consulted for Disney. He is the author of The Ouroboros Cycle series and The Transatlantic Conspiracy, a YA mystery novel forthcoming from Soho Teen. Other fiction includes The Strange Case of Mr. Salad Monday, Cinema U, An Unfortunate Engagement, and The Mask of Tezcatlipoca. He is also a voice actor and co-writer for the animated film Hullabaloo and an accompanying educational series titled Ask The Professor.

In addition to Cryptozoo Crew, Allan Gross has written for comic book companies including DC Comics, Dark Horse, and TokyoPop, as well as the Tarzan newspaper strip for United Features Syndicate, and cartoons for television. He wrote Road Song, the Doctor Cyborg graphic novels The Clone Conspiracy and Outpatient, and the novella "Bride of the Beast Man" in Titanic Tales, collaborated on the writing and editing of Gray Morrow: Visionary, and wrote the definitive retrospective on Insight Studios, IS Art: The Art of Insight Studios. He recently launched a successful Kickstarter project for his new quirky graphic novel, Life's Questions Answered, and he'll have a special signed, pre-publication edition available at the show.

Evelyn Kriete is an editor, producer, artist, stylist, marketing adviser, social media strategist, and new media coordinator. She is also a crowdfunding consultant for Indiegogo and Comicmix. Through crowdfunding, she has raised over $1 million for various projects, including the animated film Hullabaloo, which she is producing alongside film creator James Lopez. She has previously worked on the staff of literary publications such as Weird Tales and Sherlock Holmes Mystery Magazine.

“Black Mask’s reason for existing is to connect visionary, fearless creators with smart, discerning, curious readers, and no one is building opportunities for those connections on the scale that comiXology and Kindle are,” said Matt Pizzolo, co-founder of Black Mask Studios. “Comics have the power to touch the hearts and minds of millions of readers… by building bridges to new audiences, the teams at comiXology and Kindle are bringing these stories to new and diverse readers who might otherwise have missed them.”